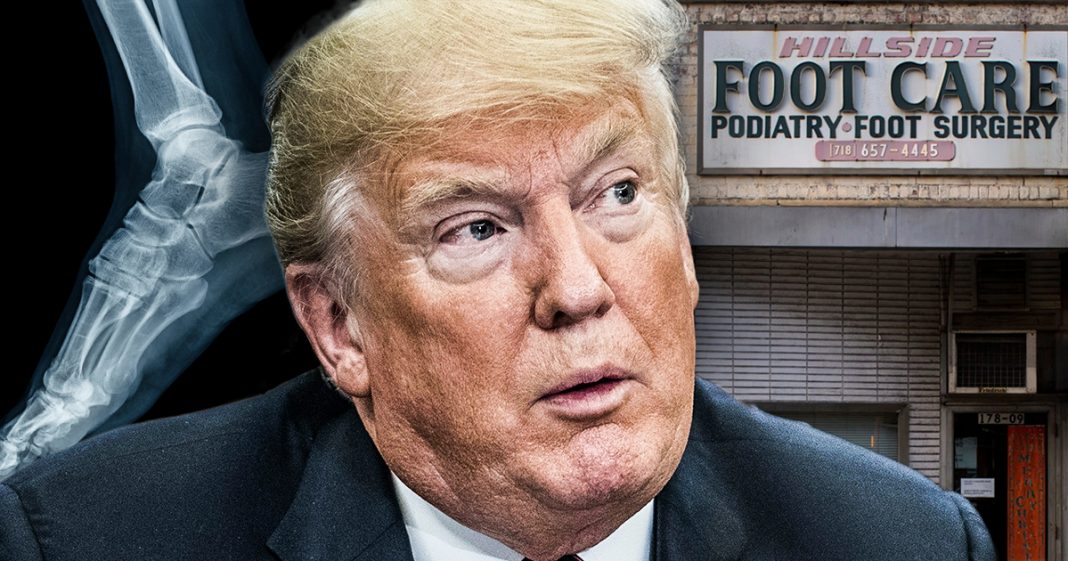 The family of a podiatrist in New York claims that Donald Trump’s diagnosis of “bone spurs” to avoid the Vietnam War was completely bogus. Their evidence? Their father gave that diagnosis in order to gain favor with Fred Trump, Donald’s father, and the owner of the doctor’s building. The arrangement allegedly worked – Trump avoided serving and the doctor was given preferential treatment by the powerful Trump family. Ring of Fire’s Farron Cousins discusses this.

According to a new report in the New York Times, Donald Trump was actually given a diagnosis of bone spurs to get himself out of the Vietnam war by a doctor who wanted nothing more than to get favor with Trump’s father fred. That is actually the conclusion, not have reporters trying to make Donald Trump look bad, but of the two daughters of the doctor who actually gave Donald Trump that diagnosis, the doctor was Dr Larry Bronstein, who passed away in 2007. He was a podiatrist. He ran his office out of a building actually owned by Trump’s father, fred Trump. So when Fred brought in little donnie trying to come up with a way to get him out of Vietnam, the podiatrist, according to his own daughters, came up with the made up diagnosis of bone spurs. Why? Well, it’s actually pretty simple. Donald Trump had obviously gone through regular health physicals prior to going to the podiatrist and everything checked out fine.

He was not able to get an actual exemption based on his normal health. So you’d go to a guy who specializes in this kind of thing. He knows what he can say that other doctors can’t necessarily refute and the government can’t argue with, and that was something as simple as bone spurs because bone spurs typically do not present with any symptoms at all. Most people have bone spurs and may not even know it. Others may occasionally feel foot pain. They take Ibuprofen, Tylenol, whatever it is, and they’re fine. They move on with their day. They don’t know it’s an actual problem and so that’s why the doctor picked that because it’s not something that would be debilitating enough to where somebody could look at them and say, Oh, you clearly don’t have this. You look perfectly fine. You’re walking normal. Get on the bus or going to Vietnam, and that’s why he did it.

And the two daughters who survived, the doctor told the New York Times that their father would speak of this frequently about how he, you know, gave this diagnosis in order to get favor with Fred Trump and the favor that he got in return was that anytime there was a problem with this building where the doctor was running his office, he’d call Fred and Fred would send people down immediately to fix it. That was the little quid pro quo there. I’ll get your son out of Vietnam and then anytime there’s a problem with is building, I’m going to be first on your list and you’re going to send somebody down here to fix it. Immediately. Worked out pretty well for both of them. But here’s the thing. Trump had claimed during the campaign back in 2016 that he couldn’t remember who the doctor was. You know, it was so long ago.

He didn’t know the doctor that gave him the diagnosis, but he had plenty of documentation to back it up and he never provided the documentation. And at this point, most medical documentation regarding exemptions from according to the national archives has already been destroyed. So there is no way to actually go back through and see what Donald Trump’s actual diagnosis was or the reasoning behind it. If Trump’s not going to release it, the daughters say they no longer have it either. It was all sold when his father, uh, when their father is huge. We sold the podiatry office. So there’s not any record really. We don’t know for certain that these two women are telling the truth, but there are story certainly does seem to add up with Donald Trump and all of it paints a picture of a man who was too cowardly to afraid and whose own father used his power in the city of New York to get his son out of conflict. And based on other reporting from the New York Times over the last few months reporting that really should have garnered a lot more coverage. That seems to be the Cmo of Fred Trump. Not only was he a decent businessman making tons of money, possibly through shady scheme sometimes, but he would also do whatever it took to protect his own son. Clearly not a trait that he was able to pass on to his own son as his kids seem to be getting in constant trouble in daddy’s not there to bail them out.

Trump has some answers, right? I mean at least some questions that need to be answered. Whether or not we get truthful answers is beside the point, but this needs to be an issue. I mean, John Kerry’s Vietnam service was something that was attacked relentlessly by Republicans in 2004. I think at the very least, Democrats could run at least one ad maybe questioning why Donald Bone Spurs. Trump can’t seem to remember the doctor’s name, can’t seem to provide any evidence and seems to be according to the doctor’s own daughters. Absolutely lying about ever even having a foot problem.