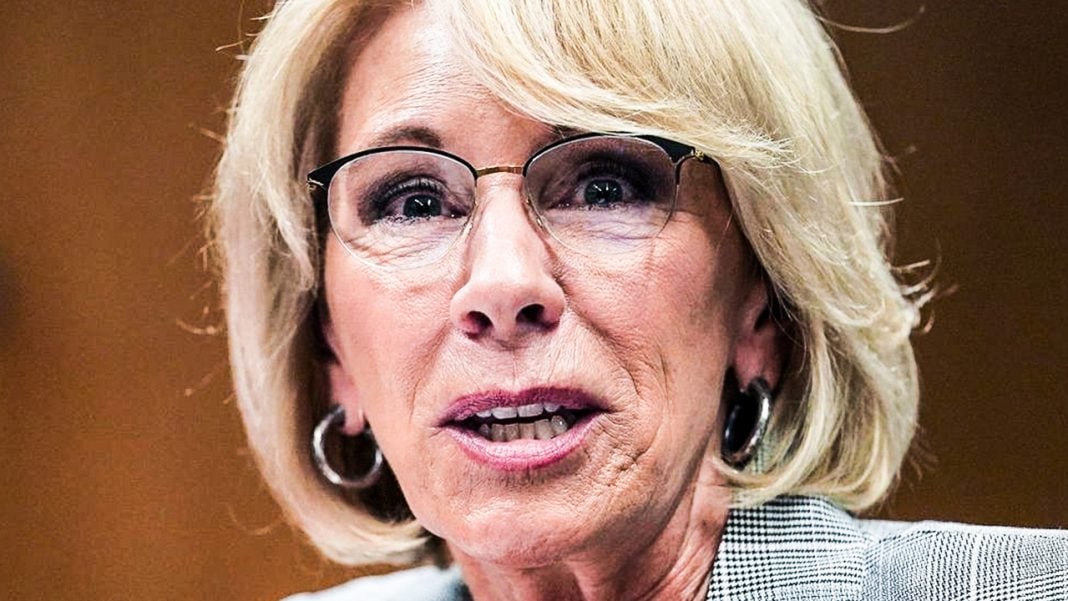 The Department of Education under the direction of Secretary of Education Betsy DeVos has finalized a new rule that actually rescinds an Obama-era rule that prevented schools from issuing harsher punishments to black students. DeVos and her cohorts believe that this rule is what has led to an increase in mass shootings at schools, in spite of the fact that nearly all of the shooters have been white. Ring of Fire’s Farron Cousins discusses this.

Last week, the federal commission on school safety that was convened after the Marjory Stoneman Douglas school, shooting back in February, uh, they finally came out with their list of recommendations on how we can reduce violence in our schools and they’re finding the conclusion that they reached, I can’t say finding because there’s no statistics to back up their claim, but, but their big decision was we’re going to get rid of an Obama era rule that prevented discrimination in schools. See, here’s what the Obama rule had done. They put out this rule that said that you cannot impose a stricter penalty on students of color, you know, based on a student’s religion, based on a student’s gender or based on a student’s sexuality. Pretty simple, right? Seemed smart and common sense and actually equal like it should be. Because at the time it turns out that black students and Hispanic students in the United States would receive far harsher punishments on average than their white counterparts.

Even when they’ve committed the exact same infraction at the exact same school. This was an epidemic in the United States. Most of us who obviously weren’t in high school weren’t aware of it, but that doesn’t mean it didn’t exist. Obama put this rule in place, they addressed it and they fixed it, but in the wake of all the school shootings, this commission convenes and says, you know why we have so many school shootings because we’re not punishing black kids harsh enough. That’s literally what they’ve concluded here. And if you’re surprised that they came to that conclusion, that let me read you the names of the people who were on this commission. Uh, education secretary, Betsy DeVos. She was in charge of it, uh, acting attorney general, Matthew Whitaker, health and Human Services Secretary, Alex Azar and Homeland Security Secretary, Kirsten Nielsen, you know, the woman who thinks it’s totally cool to lock up a foreign kids in cages and they think that putting harsher punishments on black students and Hispanic students is somehow going to stop school shootings.

Did they even look at the statistics that show that the majority, the vast majority, nearly every single one of the school shootings is perpetrated by a white student by a white student? Did they not know that? Not to mention the fact that obviously the punishments aren’t the problem because the kid who carried out that shooting and Parkland was a student who had been expelled. He wasn’t a part of that school anymore. They had kicked him out because of his behavior. This commission was given a very important job and in every possible way they miss the mark. So rather than doing anything that’s going to address the issue of school shootings, they instead put all their brain power together and came up with the brilliant plan to make black students and Hispanic students suffer a little bit more because white students in the United States can’t stop killing people.