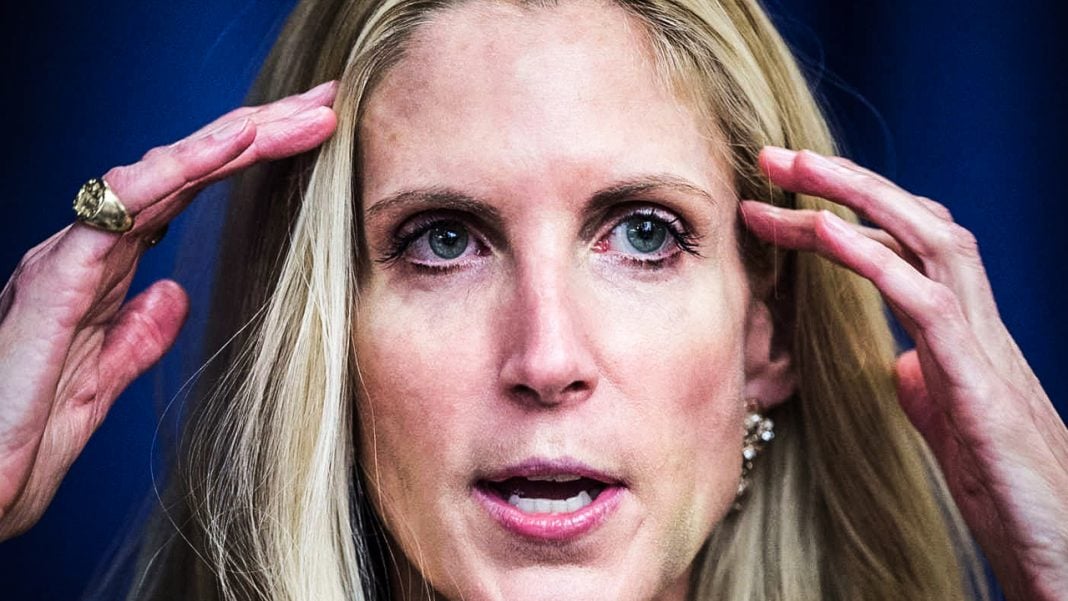 Ann Coulter is no longer the President of the Donald Trump fan club, even after writing her abhorrent book “In Trump We Trust.” Coulter believes that Trump has been lying this whole time about wanting to build a border wall, and she told The Daily Caller recently that not only will she not be voting for Trump in 2020 if he doesn’t build the wall, he’ll also be the last Republican EVER elected to be president because everyone will think Republicans are con artists. Ring of Fire’s Farron Cousins explains why Coulter is having such a hard time making up her mind about Trump.

Ann Coulter cannot seem to make up her mind about where she stands on Donald Trump, you know, just a few years ago, she actually wrote a book that seemingly was written overnight in Trump. We trust because she was certain that Donald Trump was coming to Washington dc to enact all these horribly racist conservative policies as she was going to be right there with them the entire way, and then over the last two years, there’s been this roller coaster ride with Ann Coulter and Donald Trump. Every time he says we’re going to build the wall, she starts salivating and swooning over sweet, sweet Donald who’s doing exactly what he promised, and then every time he backs off that, she’s calling for his head to roll because she hates him so much and thinks he’s a horrible human being. Who’s conned us all? Well, one of those and cultures is actually right, but it’s not the one who’s swooning over Trump.

It’s the one who admits that he is a con man willing to say whatever it takes to get elected, and Ann Coulter is one of those people who actually got conned. Now I know there’s still some some rumblings. Is he going to get the funding for the border wall? Is a coming in February? Will they get it by New Year’s Eve? Who the hell knows at this point? Uh, the answer is no. He’s never going to get the funding for the border wall and I think Ann Coulter knows that, but before any of these arguments even started last week and culture talked to the daily caller where she said that Donald Trump is likely to be the last republican president ever elected in the United States because he is destroyed the people’s trust by not giving them the border wall. I want to read this paragraph here from the week. It’s fascinating. Here it is.

Coulter said that she won’t vote for Trump in 2020 if there’s no progress on the wall by then as there would be no reason other than. So Ivanka Trump and jared Kushner can make money, which seems to be the main point of the presidency at this point, but she’s not even sure Trump will make it that far. My prediction is that his support will evaporate and Trump will very likely not finish his term and definitely not be elected to a second term. No Republican will ever be elected president again. Now, as much as I would love to believe culture is right here that no republican will ever be elected president again. We’re going to have republican presidents. Again, it’s just what does that Republican party going to look like, but that is a question for another day. What I find so fascinating about this is his cultures.

Again, the rollercoaster, she loves him, she hates him. She thinks he’s great, she thinks he’s awful, and all of it centers around the border wall culture understands the Republican base in a way that Donald Trump never can. She knows that those hardcore MAGA hat wearing folks would be just as comfortable wearing a white hood over their head because that’s been her base for decades now. She knows how to play to them. She knows that they get pissed off when Trump says, well, maybe I’ll get the border wall funding in three months. They go crazy and she jumps out there in front of the crazy so that it looks like all the crazies are following her and they’re just dumb enough to do it. They’re just waiting for the leader and Ann Coulter always swoops in like some kind of demented superhero at the last second to say, come with me racists.

I will protect you. That’s Ann Coulter, and that’s what she’s doing. At the end of the day, her saying, I’m not going to vote for him in 2020, it doesn’t matter if the border wall never materializes and culture will vote for Donald Trump in 2020. If he is the Republican nominee, she would sooner die than vote for a Democrat or not vote. We know this, but what she’s doing is she’s playing that base, getting them riled up so that they force Donald Trump to go out there and push for this wall, a wall that is likely to signify the end of his administration because the harder he pushes for it, the harder people like coulter make them push for it. The more he alienates normal people within the Republican party because yes, there are some normal people in the Republican Party, they’re getting turned off by this, so as a coulter pulls him further to the right, she’s also doing the best job ever of destroying his chances of winning reelection. Thanks, Ann. We appreciate it.