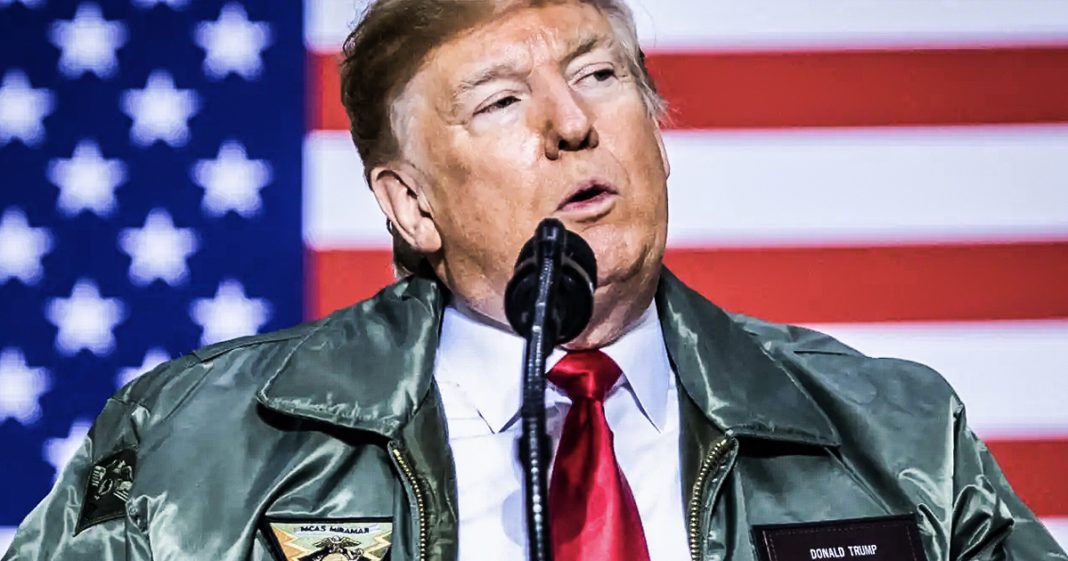 During his disastrous trip to visit US troops overseas, Donald Trump told the members of the military gathered in front of him that they hadn’t gotten a pay raise in 10 years before he came along, but he managed to give them a 10% pay raise. Neither of these claims are true, and the soldiers listening to the speech absolutely knew it. Ring of Fire’s Farron Cousins discusses this.

So Donald Trump’s visit to the troops in Iraq in Germany is still drawing headlines and one of the biggest headlines other than the fact that he likely broke the law by signing those mega hats for them, actually, they, the soldiers inadvertently broke the law by engaging in that political activity of having the president sign his merchandise. Uh, the, the biggest headline is the fact that he lied to their faces while he was speaking to them. You see, Donald Trump told the troops over there that they hadn’t gotten a pay raise and over a decade, not a dime in extra money. And then Donald Trump came along and he insisted that they get a 10 percent raise. That’s actually not just one lie, but that’s two lies. Um, here’s, here’s, here’s what he said, you haven’t gotten one in more than 10 years, more than 10 years. And we got to a big one.

I got you a big one. They said, you know, we could make it smaller. We could make it three percent. We could make a two percent, we could make it four percent. I said, no, make it 10 percent. Make it more than 10 percent because it’s been a long time. It’s been more than 10 years. That’s a long time and you know, you really put yourselves out there and you put your lives out there. So congratulations. Those word for word right there. What the president told the troops, every word of it was an absolute lie. The troops in 2019, we’ll be getting a pay raise of two point six percent. In 2018. They got a pay raise of two point four percent. The years before that it was pretty much the exact same because the pay increases for the military, which happen every single year without fail, are actually tied to the US Department of Labor based on average wage increases for average American workers.

Because if they don’t, if they start paying military members less than what they’re paying, just average working class stiffs here in America, nobody’s going to want to join the military. Not only are you risking your life which making pennies doing it so they have to remain competitive. Trump lied to them, and more importantly, they know that he lied to them because they get a paycheck and you can see it for yourself. Did your pay actually go up 10 percent this year? If not, then you know this man is lying to your face and that’s the thing. This proves that there is nothing this man won’t lie about. Even though every single person in that room can go back, get a pay stub, hop onto their bank statement online, whatever it is they do, and they can verify that he lied to them in less than a minute.

The question is, do they care? Do they realize it? Do they think that 10 percent is coming next year? I would like to think that they don’t, that they know he was lying, but it’s the president of the United States, the commander and chief of the military, and they have to show them respect and regardless of you think about the man meeting the president of the United States is a pretty cool thing. No matter who you are, what your political beliefs are. They thought it was a good thing. They didn’t want to sit there and say, wait a minute, you’re lying to us, and they don’t have to. They don’t need to. That’s what we have the media for. And the media is actually done a pretty decent job of calling out Donald Trump’s lies here. Although they’re not necessarily calling it a lie, you know, a half truth, uh, Miss, miss spoken word, whatever it is, he lied to them. He lied to them twice. He lied to their faces, and every single person in that room listening to him knows that he was lying to their faces.