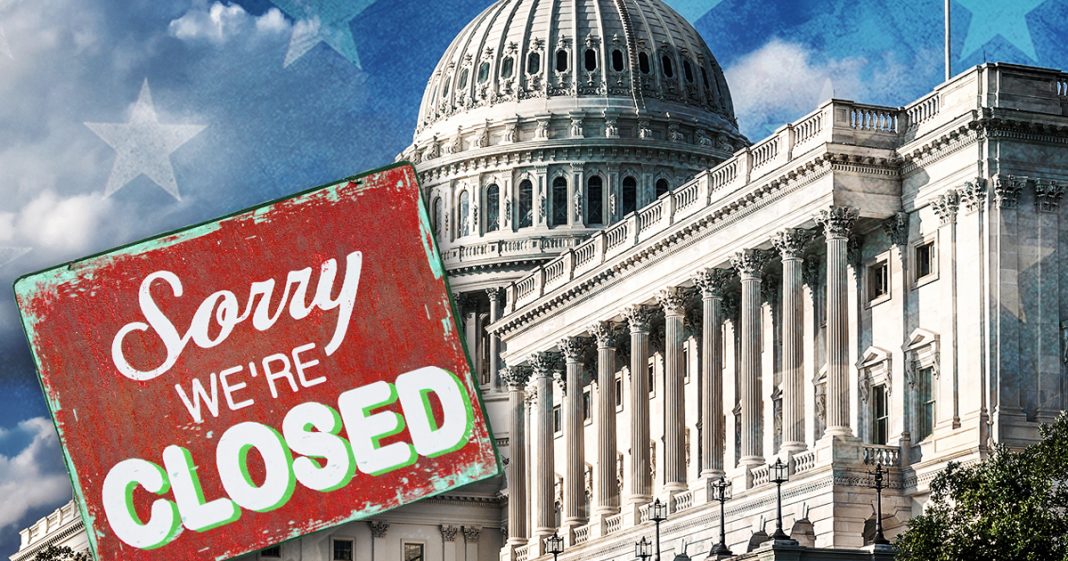 In a truly bizarre move, the Trump administration has sent a letter to furloughed workers giving them tips on how to handle their landlords now that they can’t pay rent due to the government shutdown. One of the tips suggested in the letter is for these workers to simply do chores for their landlords in exchange for rent. They are literally telling them to become indentured servants while the government is shut down! Ring of Fire’s Farron Cousins discusses this.

Well, we’re officially in day seven of the partial government shutdown with about 25 percent government services completely shut down at the moment and there’s really no end in sight. The Senate, uh, yesterday actually decided to go ahead and just adjourn until December 31st, which means there is literally no hope whatsoever of reopening the government at least until New Year’s eve. And even then, that seems like a long shot that, that would happen on that day instead. The Trump administration through the US office of personnel management is trying to make things a little easier for the furloughed workers because again, we’ve got 25 percent of government workers who are not getting a paycheck anymore. They’re not getting paid, although they are still required to go to work. Most of them every day. And we’re talking about 42,000 members of the United States Coast Guard. It’s not like they just get the time off like, oh cool, the government shut down sweet.

I’m going to go sit on my couch and watch TV for a few days. That’s not how it works. Ladies and gentlemen. These people still have to go to work, they just don’t get paid for it, so the office of personnel management with the Trump administration trying to make things easier for these workers that are getting paid a is trying to work on sample letters for furloughed workers that they can give to their landlords to explain to them that I don’t understand what’s happening with my financial situation right now because of the government shutdown a, I’m not going to be able to pay you rent, so that kind of sucks and a three, maybe I can do some odd jobs for you in exchange for paying rent. That is what the federal government is suggesting to these furloughed workers to do with their landlords so they don’t lose their housing while this government shutdown is going on in the president has made it clear he has no intention of ending this shut down anytime soon.

So yeah. Why don’t you furloughed government workers who are still required to go to work everyday. You’re just not getting paid. So then when you get home, why don’t you work more doing odd jobs for your landlord, essentially become an indentured servant to them. You know, we’re going back to the feudal system here. Be a surf for, for your master so that you can continue living in that apartment or that house or whatever it is your renting May. Maybe that might work for some of the people who actually are renting. If their landlord is like, yeah, I understand governments dysfunctional. These people are idiots. We’ll see what we can work out with you. How are you going to do that? If you’re not renting and instead, I dunno, maybe HSBC or bank of America or Chase Manhattan, maybe they’re holding your mortgage and they’re expecting that payment on January first.

What do you. What are you going to do? Call up and say, hi, Mr. Bank of America, can I, can I cut your lawn? Maybe because I can’t pay my mortgage. This is absolute insanity. It’s degrading to these people and it’s 100 percent. What happens with Republican controlled government because let’s not forget this is the third government shut down this year. In 2018, while Republicans control all three branches of government and instead of trying to help these workers do something actually meaningful, they’re saying, you know what, why don’t you just go try to like washes dishes, you know, do, do their laundry. I don’t know, but leave us alone. We know you’re complaining. We’ve got stuff to worry about to, uh, this is awful. Yet that’s not a proper government response. We have a duty to these people and these people are still carrying out their duties because this includes secret service people who are currently having to go protect Ivanka and jared down in Florida because they’re on their vacation.

Uh, they’re having fun. The secret service agents who are pretty much required to risk their lives to save these two assholes. They’re not getting paid for it. And in the meantime, there are being told, well, we know you’ve got tough living situations. Maybe you can go be an indentured servant for your landlord while we figure out this whole government shut down thing. This is what you get when Republicans have absolute power. They’re absolute idiots and they don’t know how to use it or how to take care of the American public. This third government shutdown in 12 months absolutely proves that.