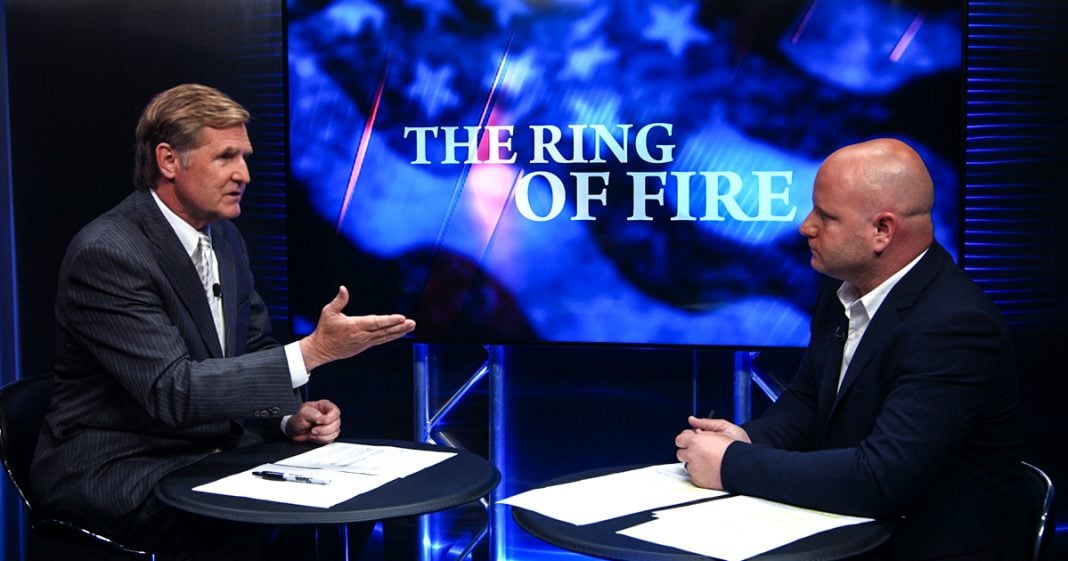 A popular brand of Surgical Mesh used to repair hernias has been found to cause dangerous problems in patients that have it implanted in their bodies. Doctors we talked to said it’s the equivalent of trying to remove concrete from rebar. Ring of Fire’s Mike Papantonio and Farron Cousins discusses this issue.

Mike Papantonio:             A popular brand of surgical mesh used to repair hernias has been found to cause dangerous problems in patients that have it implanted in their bodies. You know what’s so crazy about this story? This has been going on for so long. Johnson & Johnson, for example, knew that the material that was being used in mesh hernia material would cause a whole host of problems.

First of all, it would migrate through the body, would break away and these pieces of Mesh would migrate through the body. Second of all, it wouldn’t, it would not allow the site to even heal. The infections are overwhelming. The long-term problems and pain are overwhelming. The reason they know this is because four other companies had been making the same thing and four other companies had been sued for the same thing and that took place years ago.

But Johnson & Johnson, just like Johnson & Johnson always does says, well, you know, we’re going to do it anyway. It’s just like, you know, the baby powder case. A friend of mine just hit the for $4 billion dollars in 22 cases of cancer. It, Johnson & Johnson always, always focuses on the bottom line, always to the detriment of consumers. You know, take it from here. I’ve actually, full disclosure, I’ve handled these cases. I know a lot about them. I know why the material is causing such danger, but go ahead and talk about it.

So they make it and sure enough, it causes migration. It causes a adhesion where, where it either at, you know, basically becomes a part of the organ or it makes organ’s fuse together if they’re touching with this mesh. It causes massive infections and horrid inflammation because of the chemicals in this polypropylene actually hinder the healing process.

It makes it harder for the hernia to heal, and of course doctors, anytime something like this comes out, unfortunately these drug reps go out. They say, hey, we know you’ve been using these old meshes that have been perfectly fine, but here’s something new. It’s lighter, it’s more flexible. It’s going to make your patients feel so much better, so use our mesh instead of the old things that have worked for so long.

Mike Papantonio:             Let me, let me put this in perspective for you. Okay? You’re in a business and five, six years before, there are hundreds and hundreds of cases saying that this thing that you’re about to put on the market will bad human injury. Now, for example, these were, if you can imagine, these were actually used for vaginal, a vaginal mesh program. Now we’re talking about hernia mesh, which is the same material.

I’ll just use this mesh package. That little Susie distributor, you know, shows up at the doctor’s office with cupcakes, Doc, We got a new product. It’s this mesh product. You can use it in surgery. You don’t have to be a specialist. You can put this in anybody’s body. It is a disaster. And Doc who simply is looking at the business aspect of it says, oh, that’s great. I can do more procedures, I don’t have to have special training because I have this package.

It’s the hernia package. It’s the Johnson & Johnson Hernia package that I can use every single day without special training, and in the meantime, they botched the process and hundreds of thousands of people all over the world are using these kinds of products and it’s killing them. And Johnson & Johnson says, oh, that’s okay. We can still turn a profit.

Farron Cousins:                  Well thats, here’s a really good analogy for what you just said. It’s basically the difference between going and hiring a master craftsman to make you a desk or going and buying a pre boxed packaged desk with pieces one, two, three, four, five that comes with the instructions on how to put it together. You’re going to get a lesser quality product, but it’s cheaper and faster and that’s what these mesh kits are. It is a step by step, paint by the numbers. Every hernia is the same, so don’t worry about it if you’ve never done one before. The instructions are basically on the back of the box.

Farron Cousins:                  Whereas in the past you would have a skilled surgeon go in. They wouldn’t have to use these. They would, you know, get in there and repair the tissue. It would take a little bit longer. They couldn’t do as many surgeries in the day, but when hospitals became all about profits, it was turn them and burn, get ’em in, get ’em out.

Mike Papantonio:             Hospitals became a corporation no longer dr hospitals, it’s no different than Exxon. They call it a hospital, but it’s a corporate hospital. Look, if you’re told, listen to this, you’re told, yeah, you can use this product, but you might want to know it can cause death. It can cause, where it’s where it’s put in, it’ll cause that area to deform. It’ll cause contact and migration with other organ systems that will cause failure of the organ systems.

It will induce adhesions that cause chronic and severe pain that we can’t correct, but you know you’re welcome to use it. These are the types of things the patient doesn’t know because the patient trust the doctor. The doctor says, oh yeah, this is good stuff, and if they only understood how little the doctor really knows about it, especially the doctors who are using this stuff because these aren’t doctors, as you say, these aren’t.

Farron Cousins:                  Right, and you get the board of directors at a hospital saying, hey, you spent three hours on this surgery. We could’ve had the guy from down the hall do it in one hour with a mesh kit that’s more money, but also we have to talk about the FDA’s role in this because they, you know, Johnson & Johnson, as you said, they came to the mesh party a little later than everybody else.

Farron Cousins:                  So they didn’t have to get approval for their hernia mesh because the FDA is so screwed up that the rule is, you walk into the office and say, hey, I’ve got this new mesh, but it’s so similar to these other meshes on the market that we didn’t have to do any testing because they did the testing. You approved theirs, you have to approve ours.