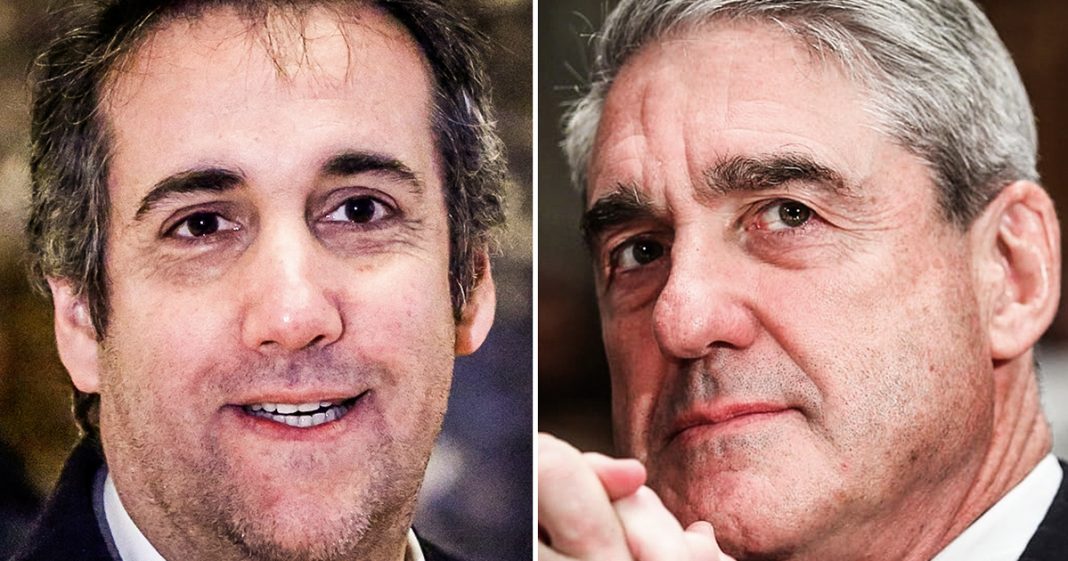 Michael Cohen, Donald Trump’s former attorney who is cooperating with special prosecutor Robert Mueller, was once again in headlines this week after McClatchy broke a story saying that cell phone records put Cohen in Prague at the same time the Steele Dossier says he was there. Cohen denied that he went to Prague, but he added “Mueller knows everything,” sending mixed messages about what’s going on. Ring of Fire’s Farron Cousins explains what could be happening.

All right, so big news yesterday, obviously I’m McClatchy reported that Michael Cohen cell phone had been pinged from a cell tower near per a prog in the summer of 2016, which would corroborate a key point in the Steele Dossier. Now when that broke, obviously huge news, uh, if coincide cell phone was pinging against a tower in Prague that would put them in the vicinity that would validate a big part of the Steele Dossier and kind of show that, yeah, the guy went over there to try to speak with foreign officials to help the Trump campaign. Now, after the story broke, Michael Cohen repeatedly answered questions on twitter from reporters saying he’s never been to Prague. They asked him, did he go anywhere near there? He said No. In the past he had shown them his passport, which never had a single stamp from Prague. Now there’s several problems with this story and one of them actually include something that Michael Cohen tweeted out yesterday.

In fact, uh, he tweeted out a cryptic message that said Mueller knows everything, and that was actually tagged on the end of one of his tweets where he said, I hear Prague is great in the summertime, wouldn’t know, never been. Their mother knows everything, so Mueller knows everything. McClatchy saying Cohen was in Prague coinciding. I wasn’t in Prague. Mueller has said that Cohen has been a good cooperating witness. That’s why he should get a reduced sentence. They believe what Cohen has been telling them. Cohen is now telling us that McClatchy is not telling the truth. And Oh my God, what the Hell is going on? Here is my simplest solution. All right. There’s a lot of speculation out there. So what the hell. I’m going to throw out some speculation myself. Michael Cohen never went to Prague. Michael Cohen didn’t have to go to Prague. Is it entirely possible that Michael Cohen cell phone went to Prague even though Michael Cohen didn’t?

Yes it is. Because if you remember when they rated Michael Cohen’s office, they didn’t just take a cell phone. They took multiple cell phones, you know, kind of like what people would have if they were running some kind of criminal enterprise where they would have to give these little burner phones or whatever it is to people to go out and do their bidding. Doesn’t that seem like a much more plausible explanation than saying Cohen went to Prague even though his passport said he didn’t. He maintains that he doesn’t. Mueller maintains that he is telling the truth and Mueller does know everything according to Cohen, wouldn’t it be much more likely that Cohen Senate operative with one of these cell phones, that was obviously in Cohen’s name. They go to Prague, they do the meeting on behalf of Cohen and the Trump campaign they report back to via the cell phone.

They get back, they hand the phone back. That’s actually how a lot of criminal enterprises work. It prevents people from using their own cell phones and you know, having this kind of paper trail because nobody thought Cohen was going to get rated in any of this. Now again, keep in mind totally speculation about that, but that is my belief as to what has happened here. After all, if Cohen’s saying, I didn’t go to Prague, but relax, Mueller knows everything, Mueller has those phones. Mueller has those phone records. He would know if Michael Cohen sat down with him and said, all right, here’s what happened. I sent person x over to Prague. I gave them phone be they took it with them. Here’s everything that corroborates this and that is what happened. So the Steele Dossier that said Colin was in Prague. Perhaps it wasn’t Cohen, but somebody else on Cohen’s behalf.

There’s a lot of different ways that would actually make everyone in this particular situation be technically telling the truth, just maybe getting a name or two wrong here or there, and that is what I think may have happened in this particular situation. But the bottom line is actually the last line from Cohen’s tweet. Mueller knows everything. So whether or not this McClatchy report is telling the truth. We know that Mueller knows the truth. He has the phones, he has the phone records, he has Cohen’s passports. Maybe he has more than one, and the second one that he didn’t show reporters is just nothing but stamps of Prague. Who knows at this point, obviously other than Robert Mueller, the only other person would be Michael Cohen. So again, as much as it sucks, we’re probably just going to have to continue sitting here waiting for the end results of this investigation. And at that point, hopefully all of us can get on the same page.