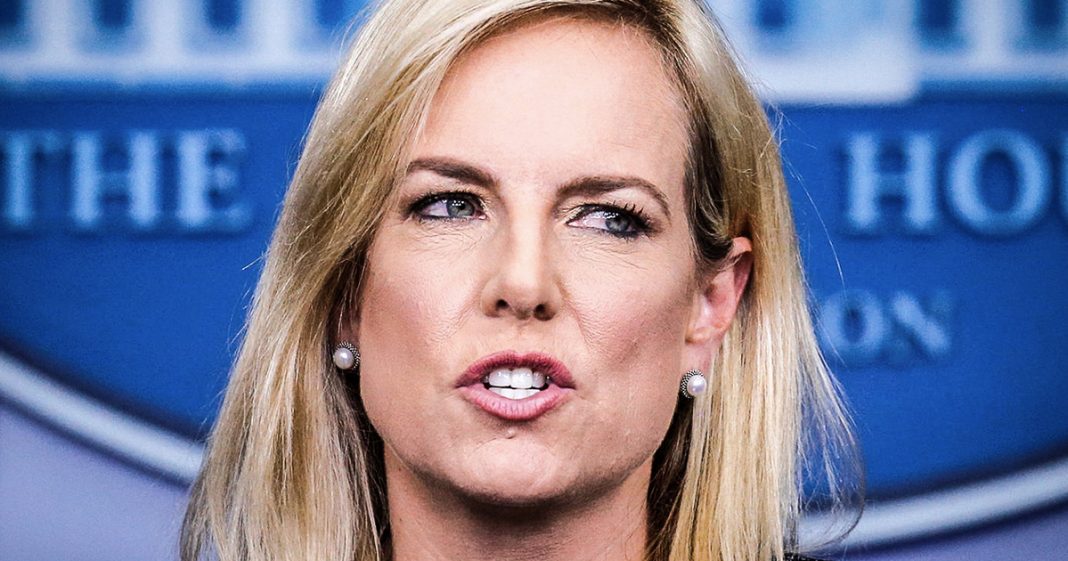 Homeland Security Secretary Kirstjen Nielsen has given several heartless responses to the deaths that are taking place in the child detention camps that her department is running, but her response after the latest death is absolutely abysmal. Nielsen blamed the child’s death on both “parents” and “open border advocates” which is a code word for “Democrats.” This woman must be stopped, and Democrats have to make it their top priority to remove her from power as soon as possible. Ring of Fire’s Farron Cousins discusses this.

Homeland Security chief, Kirstjen Nielsen has had some pretty heartless responses so far to the children who have died in custody or who have died shortly after leaving ice custody, but her response to this most recent death that happened on the evening of Christmas Eve is absolutely the worst. She came out on Wednesday and issued a statement where she blamed the parents of these kids for bringing them over here like, oh, you didn’t want your kid to die, shouldn’t have brought them to the United States, and then she blamed another group and this other group is what she called the open border advocates, which in trump world is a code word for Democrats. Kirstjen Nielsen, Secretary of Homeland Security, somehow just tried to blame Democrats for the fact that children are dropping dead and they’re migrant detention camps. Here’s the thing, Kirstjen, nobody’s going to believe that at least no rational thinking person would believe that they understand that you personally signed off on all these policies.

You are 100 percent okay with locking these people up. Even the ones who were coming here legally seeking asylum, which is not a crime, the rest of them are committing misdemeanors for illegally crossing the border, but you’re fine with locking them up for months on end for a misdemeanor. This is on you. You can go out there and use your fancy buzzword. Buzzwords like open borders advocates. We know what you’re talking about, but at the end of the day, all of these deaths are on you and here is my wish for you for not just the new year, but for the rest of your life. I hope every second of every day you are haunted by the memories of those children who have died every day. I hope you never have a moment of peace for the rest of your life. I hope every time you close your eyes, you see their faces.

I hope that you never forget it and I hope it torments you and I hope it drives you insane knowing that you were the one who could have stopped this, but she didn’t. You doubled down on it. You triple down on it. Three kids are dead and the best you can come up with is well shouldn’t have brought them. Here is what happens. It’s also Democrats. Dammit, you’re a piece of shit. You’re an abject steaming pile of human excrement. Kirstjen Nielsen, for allowing this to happen, for being heartless and completely unsympathetic to the of these people, especially the ones who are coming here legally and you’re denying them. You’re letting them die. Your letting them die, so even if you live another 100 years, I hope every moment is filled with complete contempt and disgust that you have for yourself because of what you let happen to those people down at the border. It is 100 percent on you and I hope that that haunts you forever.