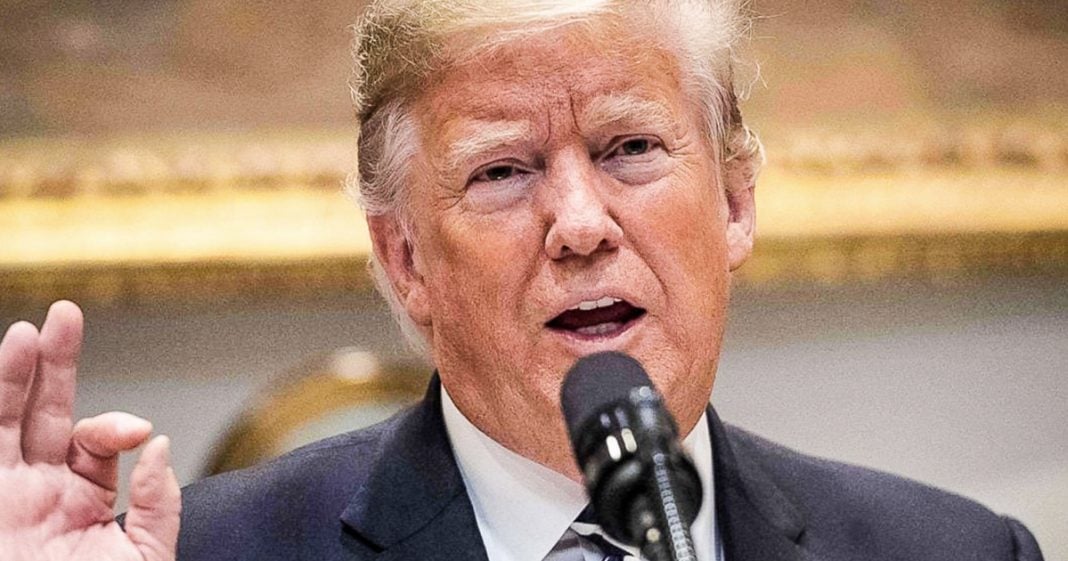 During an interview with Reuters this week, Trump said that he is not concerned at all about being impeached because his hardcore followers will revolt if he is ever in danger. There was a time when that was likely true, but there is a sea change happening right now, even amongst Trump supporters, and the number of people who believe that the President is innocent is shrinking by the day. Ring of Fire’s Farron Cousins explains what will likely happen with Trump’s base if impeachment does occur.

On Tuesday of this week, Donald Trump gave an interview to Reuters where they were asking him about the possibility of impeachment after all the president has been implicated in felony activity by his former lawyer slash fixer Michael Cohen. He is very clearly the individual one listed in those court filings. So Reuters was asking, Hey, what, what’s up with this? And Donald Trump said, the following in response said, it’s hard to impeach somebody who hasn’t done anything wrong and who’s created the greatest economy in the history of our country. Um, I’m not concerned. No, I think that the people would revolt if that happened. So is Donald Trump right now telling us that his craze supporters are going to revolt, maybe try to overthrow the government if this man is impeached. And, and before we actually even dive into that a little bit, let’s talk about the fact that it doesn’t matter how good the economy is, which it’s really not as good as you say.

It is. Certainly not the best we’ve ever had, not even close to it, idiot. Um, that wouldn’t weigh on your impeachment. You Moron. You can’t go out there and do all these illegal things and then say, yeah, but we created 150,000 jobs last month, so let’s call it even right that, that’s not how it works. That is not how this works. You are so painfully stupid. Your stupidity causes me pain because I can’t even dumb down my own brain enough to process how stupid you truly are, but this is less about stupidity, uh, stupidity and more about how frightened you are because that’s what’s happening here. And to address your second point, the bigger point about the revolt that’ll take place. If you get impeached, let me tell you what’s going to happen with these so called a revolt that you’re predicting right now. You’re starting to lose a little bit of support from some of your most hardcore supporters.

Not many, but some. The reports are out there, they’ve done interviews. A couple people maybe have flipped just like all your buddies flipped on Youtube, but a lot of your support is coming from insecure people. People who desperately need a hero because they themselves feel weak. Psychologists have analyzed this. They’ve looked at all of the available data and this is the conclusion that they’ve come to, so in terms of a revolt, if you get impeached your base based on the analysis of mental health professionals do not have the courage to go out there and actually do something and that’s actually not even an attack on them. That is typically what happens in situations like this. Just like all the Democrats who did not move to Canada when you won the election, there’s always talk of a grand scheme, a grand, we’re going to do this.

We’re not going to take it. We’re going to make sure we stand up and do it, and then it never actually comes to fruition. That’s what happens. So you can piss and Moan and say, I didn’t do anything wrong. The economy’s good, my base will revolt. None of those are going to save you from impeachment because yeah, you have done things wrong. You’re implicated in felony activity. No matter how you spin it, no matter how you try to say no. That was a private transaction. You basically admitted to it. At this point. Now I don’t see impeachment on the immediate horizon. I don’t even know that it will actually happen, but what I do know is that at some point you’re going to have to answer for all the crimes that you have at least been implicated in and that time may come during the 2020 presidential election. If enough evidence comes out showing that you have committed crimes, maybe the Democrats don’t even worry with trying to impeach you and instead make your criminal activity the flashpoint of that campaign, and if they do, then you’ll have to deal with the comeuppance from the American voters and it’s going to be up to them to decide whether or not they want a criminal serving in the White House.