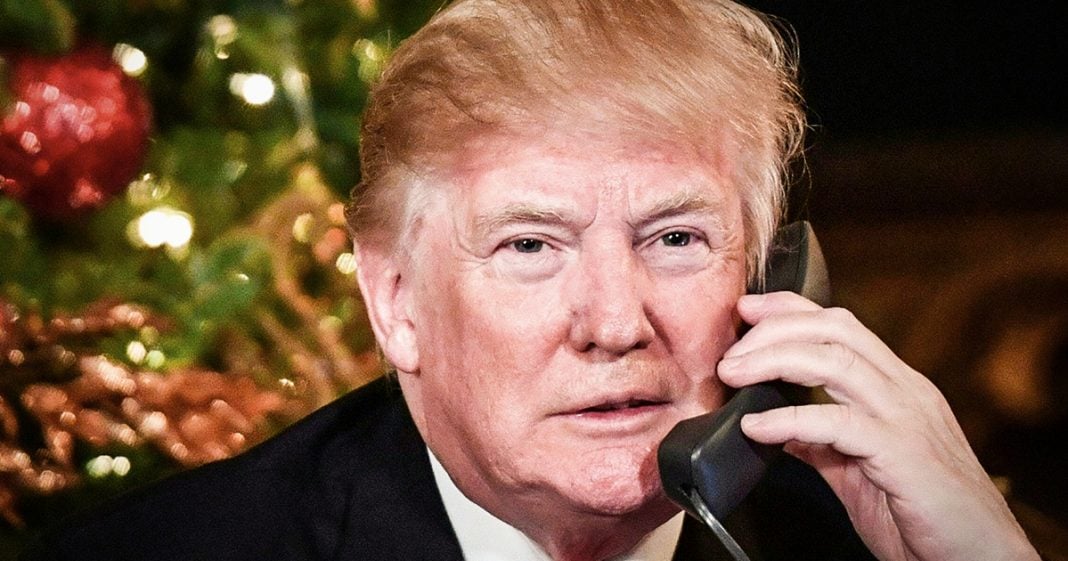 During a Christmas Eve phone call, Trump somehow managed to ruin Christmas and the myth of Santa Claus for a curious 7-year old girl. The young girl was calling into NORAD to check on Santa’s progress when she ended up on the phone with the President who asked if she still believed in Santa because, at her age, the President said it was “marginal.” The young girl hasn’t given up hope, in spite of her call with Trump. Ring of Fire’s Farron Cousins discusses this.

On Christmas Eve, Donald Trump managed to take his unique ability to ruin absolutely anything he touches and almost destroy Christmas for a seven year old little girl. Here’s what happened. The girl called into NORAD who has been tracking Santa Claus for 63 years. Kids call in every Christmas Eve. Find out where he is. You can tune into it on TV. It’s a lot of fun. So she calls NORAD, wanting to know where Santa Claus is and the scientists who answers the phone says, hey, would you like to talk to the president of the United States? Seven year old little girl, super excited. Hell yeah. I want to talk to the president of the United States. Of course she didn’t say it like that. So she’s on hold for seven minutes. I’m. She says there was no music, no nothing on the phone, just dead silence. Um, and then suddenly the president of the United States comes on the phone to this little girl and Christmas Eve.

Now, regardless of what you think about Donald Trump, that would be pretty cool. Just to be on the phone with the president at that age. That little girl doesn’t know too much about politics, you know, left or right or all that. All she knows is I’m on the phone with the president of United States on Christmas Eve. This is probably the coolest thing that’s ever happened to me. And then it became not the coolest thing to ever happen to her because the president asked her if she still believed in Santa Claus because at the age of seven it’s marginal, right. Is literally exactly what he said to her because it’s seven. It’s marginal, right? So he is questioning whether she believes in Santa because he feels she’s a little too old to believe in Santa Claus for A. So. All right. Then obviously this story kind of blows up.

Everybody sees the video. We hit on twitter, we see it in articles. So then a reporter’s reached out to the family and they. They talked to the little girl Coleman Lloyd and she says, I still believe in Santa Claus. You know, I was just. I thought that was really great. I got to talk to the president, so she’s okay. Right. I mean, he didn’t actually destroy her belief in Santa Claus. In fact, what confused or the most is that she had no idea what the word marginal meant. Uh, and that’s what she told reporters. So I just, I didn’t know what that word was, so I just said yes sir. Okay. Yeah, sure. And she got, you know, a really nice doll she’d been wanting for Christmas, reaffirmed her belief in Santa, you know, kept that mythos alive for her for just a little bit longer. No, thanks to Donald Trump himself because that’s what this is really about, right?

I mean, all you had to do was not being an idiot while talking to a seven year old girl. That’s a pretty easy task. I mean, that’s a very low bar to clear and you couldn’t even do it. You had to throw it led you to believe in Santa Claus. I mean, Howard, he is seven. Uh, I don’t know if that’s okay. It’s your age. Come on. It was Christmas Eve. You were trying to do a nice little photo op. Maybe show people that cheer it, actual human being for a few seconds every year and you couldn’t even manage that. Donald Trump absolutely destroys everything that he touches. Everything that he interacts with and everything that he attempts to take control of. But luckily this little girl woke up on Christmas morning, still believing in Santa Claus, still believing in the magic of Christmas and actually still caring about the president because apparently that little girl is a much better human being than the president himself actually is.