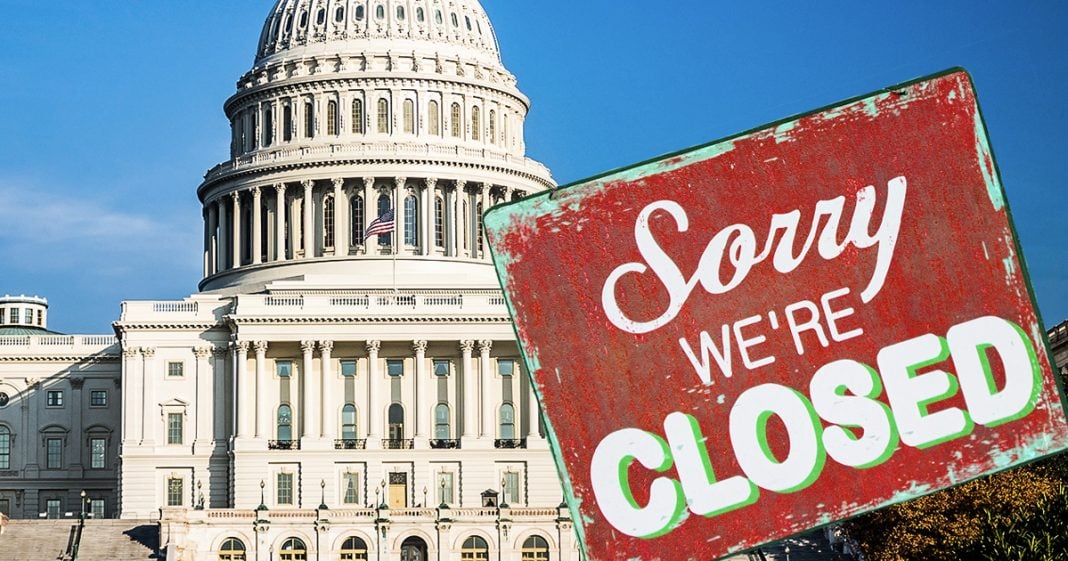 The Republican Party currently controls all three branches of the federal government, and for the third time in 12 months, they’ve managed to shut down the government again. This is a failure of leadership and a complete failure to protect the American public. These shutdowns should be at the top of every Democrat’s talking points for the next two years, as Ring of Fire’s Farron Cousins explains.

Well, ladies and gentlemen, for the third time in the last 12 months, the Republicans have managed to shut down the federal government. Once again. Yes, we are now in our third government shut down since last January, and while this one is a partial government shutdown, only about 25 percent of the federal government is currently inactive. Basically working without pay, which includes 400,000 federal workers. At least we’ve got 75 percent functioning. So I guess that’s something. And while we could talk about, you know, the squabbling, I guess over the border wall, will they fund it? Won’t they funded? Who knows? Is it still a wall? Is it steel slats with spikes on tops? It’s anybody’s guess at this point. The important thing to take away from this as the fact that the Republicans control all three branches of government and for the third time in 12 months they’ve shut it down.

That is a failure of leadership. That is a failure of the Republican Party. This is not on the Democrats because they don’t want to give funding for a border wall. This is 100 percent on the Republican Party, and that’s what people in this country need to remember. It’s not about Democrats not wanting to give $5 billion for the wall. They only want to give one point $3 million for border security, which would be used for the wall. So I don’t know why they would even bother offering that, but nonetheless, this is a Republican shut down and it’s the third one we’ve had this year. The federal government is poised to lose billions of dollars. The economy is going to lose billions of dollars from the lack of activity. National Parks are going to suffer over the next few days as people who are on vacation and would probably love to see those areas are told that they are not allowed in because the government is shut down.

Here’s what’s going to happen. Uh, the Senate has to approve a deal. Uh, that would include Donald Trump’s border wall funding in order for the president to sign it and reopened the federal government. The Senate needs 60 votes. In order to do that, they only have 51. Republicans, you’re not gonna find nine turncoat Democrats, uh, which I know is a surprising thing to say, but you’re not going to find nine who were willing to jump ship and go to the Republicans. And in the shutdown, what’s more likely to happen is that the Republicans, the president himself, is going to have to cave because in one week, Democrats take control of the House of Representatives and at that point, whatever legislation the house has already currently past, that does include the president’s border. Wall funding is going to be shot down. It’s going to be rewritten and it’s not going to include a single dollar for the president’s border spikes or whatever you want to call them now. So yeah, if they don’t reopen the federal government sometime between now and this day next week, basically, this could be a long road ahead. We could see more areas of the government shut down as a result of this. But at this point, the Democrats have to remain steadfast, and more importantly, they have to continuously remind the American public that the Republican controlled government all three branches, even though the judiciary didn’t have anything to do with this. They control all three branches and that is exactly how many times they’ve also shut down the federal government this year because the Republican Party is completely dysfunctional.