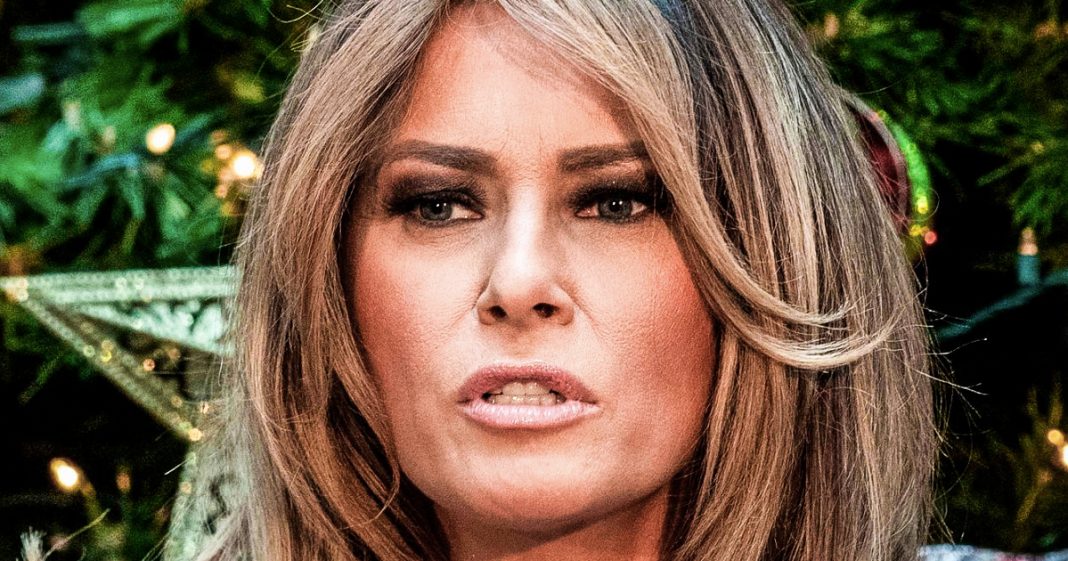 Polls are telling us that the more the public sees and hears from Melania Trump, the less they like her. In the last three months, her approval rating has fallen by 20 percentage points, with her now holding a net negative approval for the first time. The public isn’t buying her phony victim-playing and they realize that she’s EXACTLY like her husband. Ring of Fire’s Farron Cousins discusses this.

Something interesting has happened with Melania Trump over the last few months. You see, prior to October of this year, Melania Trump had always enjoyed and improve unapproval rating above 50 percent. Sometimes there’s only like 51, 52 percent, but throughout most of the first year and a half of this administration, she had a net positive approval rating. Half the country at least always looked at her and said, you know, approve of her. She’s doing a good job. But in the last two months, up until about mid December, the latest round of polling we have, she has changed, not just her personally, I’ll get to that in a moment, but her poll numbers have changed and now there has been a 20 percentage point change and she has a net negative favorability. Uh, basically hitting the lowest point that she has ever had. Since people have been pulling about her, roughly 40 percent of people in this country actually approve of the job.

Melania Trump is doing a back in October, that number was up to 54 percent. Said, heck yeah, she’s doing a great job. So what happened? What was the change in Melania over the last two months? Well, I’ll put it this way. I really don’t care. Do you? You see that jacket, that little stupid jacket Kinda set Melania Trump down this path from which she is not going to return. See, she wore that jacket is everybody recalls when she was getting on a plane to go visit, the children that are husband had locked in cages. His policy locked them in cages, and she wears a jacket that says, I really don’t care to you. So then she comes back, weeks pass, and she finally says, yes, I wore the jacket to make a statement, but the statement was not to the children. It was to the media.

I don’t care what you say about me. I am also the most bullied person ever. She said that. She actually legitimately said that she’s the most bullied person ever exceeded most bullied person in the world was her exact quote, most bullied person in the world. Well, the public doesn’t buy it. The public doesn’t believe it because the public understands what’s going on and they understand that the more melania goes out there and talks and is seen in public and it seen supporting her husband, the more they don’t like her right now, her approval rating is still higher than her husband’s, but it is falling a hell of a lot faster than his ever had. The more she is seen with him, the more she speaks to the press and says these horrendous statements that everybody knows aren’t true. The less the public likes her. And to be honest, it’s about time.

Melania, as I’ve said many times before, it’s no different than her husband. She was a birther. She pushed the conspiracy theory that Barack Obama was not born in the United States. She represents allegedly all of the things that Donald Trump says he hates about immigrants. She worked here without a visa, so she was working illegally. Uh, her parents came here through chain migration, actually got fast tracked, obviously because their son in laws, the president, and she had the, what Republicans call anchor baby. So yeah, she’s literally every single category that they claim is so bad about immigrants, but it’s totally cool when she does it and the public sees through that force, they see through her phony personality, they realized that she is not a good person and it’s about damn time for that too. But I have to say there is one group that actually still has a net positive approval rating of Melania. Uh, it’s actually a couple different groups. It’s white people, men, uh, people over the age of 45 and people without college degrees. So basically old stupid white men love Melania Trump. Just look at her husband, old stupid white man, but the rest of this country, they absolutely are starting to hate her. And it’s about time.