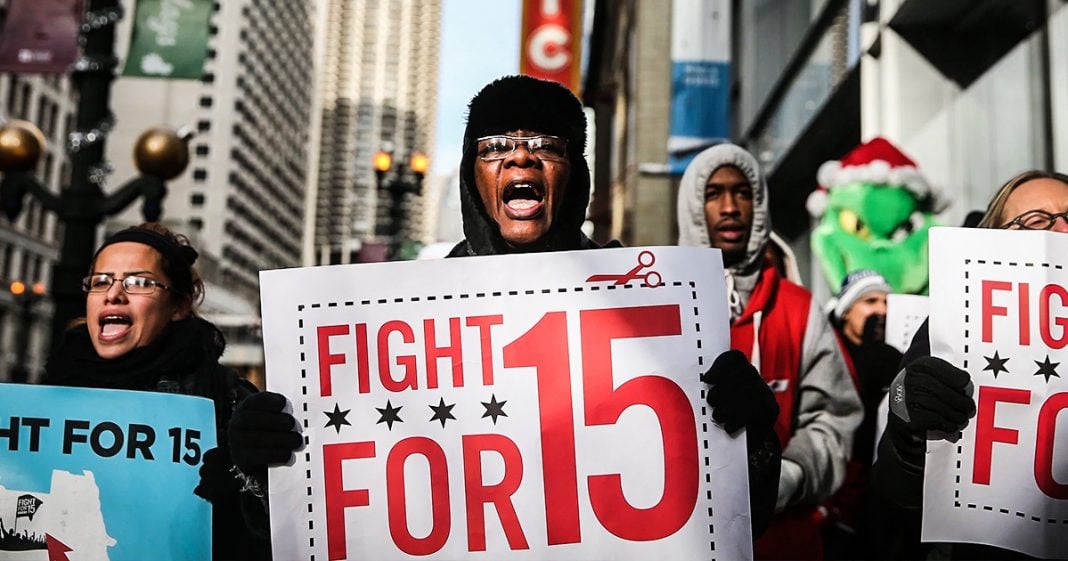 The critics of raising the minimum wage to $15 per hour in places like Seattle warned us that the sky was going to fall if that happened – jobs would be lost, unemployment would skyrocket, and the city would spiral out of control into a recession. Well, here we are several years later and all that’s happened is major job growth, increased spending, and a robust economy due to the flow of cash. Increasing the minimum wage benefits EVERYONE, as Ring of Fire’s Farron Cousins explains.

A few years ago, the city of Seattle increase their minimum wage to $15 per hour and it was actually not an overnight. Now it’s $15 an hour. It was a gradual. We’re gonna increase it this much this year, this much next year, and then eventually make it all the way up to 15 a gradual yet actually pretty rapid and at the time you had these right wing think tanks in Washington DC, conservative commentators telling us that this was basically going to be the end of Seattle, right? Businesses, we’re going to shut down, left and right. Poverty was going to become horrible because of all the businesses shutting down. People would lose their jobs. It was basically the apocalypse isolated only in Seattle because they were raising their minimum wage to $15 an hour. Well, here we are, a few years later, minimum wage, $15 an hour and kicking in at places with 500 or more employees like big box stores or fast food chains.

The minimum wage is actually $15.45 per hour. Uh, and the economy’s booming. Absolutely booming. Job Creation in Seattle is through the roof rather than collapsing the entire economy of that city, it’s made it so much better. Rather than losing jobs, they’re creating jobs at a pace faster than the rest of this country. Raising the minimum wage worked, increasing the take home pay of the people who live paycheck to paycheck has resulted in more money going into the economy, which creates jobs. It creates growth. It creates new opportunity, and that’s something. Those right wingers completely missed all those people releasing the studies. You know the, The Heritage Foundation, the, all the other right wingers, you know the, the ones who told us the sky was falling. They told us this not because that’s what they thought would happen, but because they wanted to scare us to not pay people better wages.

They don’t think. They actually don’t think that this is going to destroy the economy. They have to know that all of the data showed it would do the opposite, which is exactly what’s happening. I mean even data from the nineties showed that increasing the minimum wage creates massive economic growth. They knew that, but what they didn’t want to see was employers having to spend a little bit more money on their employees, giving them better pay, but at the same time, those same employers end up making more money because it’s not just their employees who are getting more money. It’s the employees of other industries who then suddenly have money to spend at your company, which puts more money back into your pocket. See, that’s the part of the studies and the reports, the papers that Republicans always leave off. It’s not just that you have to pay people more money, is that you get more money coming in because there’s more money in the economy.

That’s how it works and this is why $15 minimum wage for the United States, a blanket minimum of $15 an hour has to be. It has to be one of the top priorities for whoever wins that 2020 Democratic presidential nomination. This has to be a part of the platform. This has to be a part of the future. This is the only way to continuously grow this economy, which right now is on very shaky ground. If we want things to be better in the United States, if we want to snap income inequality back down to the levels it was in the seventies and sixties, then we have to give the workers more money. We have tried repeatedly since the 19 eighties to give more money to the top one percent claiming that it was gonna, increase the wages for everybody else. It never has. It never did, and it never will. You know what increases the amount of take home pay that workers get increasing the amount of take home pay that workers get, and the only way to do that is to increase their wages. Wage increases benefit every single person in a society. Seattle is living proof right now and the Democrats do themselves a disfavor. If they don’t make that one of the top priorities of their 2020 presidential campaign.