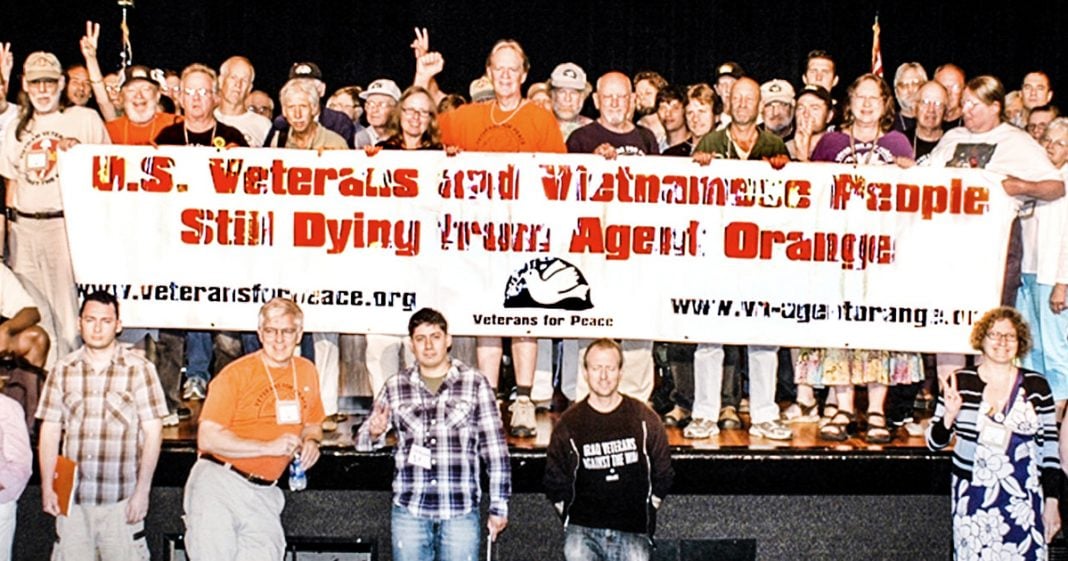 Thousands of veterans in the United States have already died as a result of their exposure to Agent Orange during the Vietnam War, and countless more are developing cancers that have been linked to exposure of the defoliant made by Dow and Monsanto. But recently, the US Senate decided that they weren’t going to extend the Agent Orange benefits that they have set aside to Navy veterans who served in Vietnam, even though they were just as likely to be exposed as other branches of the military. Ring of Fire’s Farron Cousins discusses this.

Recently, the United States senate had the opportunity in the form of legislation to extend benefits to us navy veterans who served in Vietnam and developed cancers and other diseases as a result of exposure to Agent Orange, the U.S. Senate was poised to pass this bill. They said, well, yeah, these people served in Vietnam. They were exposed to this. They’re now developing debilitating diseases. Tens of thousands have already died from it, so why wouldn’t we extend these benefits to members of the navy when we’re giving it to the army and the marines and everybody else? The navy deserves it just as much. They had just as much exposure and then Republicans in the Senate said, I don’t want to do it, and that’s what happened. That’s where the bill died. Republicans didn’t want to give these us navy veterans suffering from cancers because of their exposure to Agent Orange that the United States military dropped.

They didn’t want to cover their healthcare after they were the ones who gave them cancer. That’s what happened. In case you’re not familiar with Agent Orange, let me go ahead and run through this massive list, and this is actually only a partial list of some of the diseases and cancers that Agent Orange has been known to cause a soft tissue sarcoma, non Hodgkin Lymphoma, Hodgkin’s disease, chronic lympha lymphocytic leukemia, respiratory cancers including lung, bronchus, trachea and larynx, prostate cancer, multiple Myeloma, bladder cancer, um, and overall Vietnam veterans as a whole have increased rates of cancer, nerve, digestive skin, respiratory disorders. The CDC says that in particular there’s higher rates of acute chronic leukemia, Hodgkin’s lymphoma, non Hodgkin’s lymphoma, throat cancer, prostate cancer, lung cancer, colon cancer, ischemic heart disease, soft tissue sarcoma and liver cancer, all from this chemical that was primarily made by us chemical companies, Dow Chemical and Monsanto.

We were dumping that thing by the barrel full by the plane full all over Vietnam, Vietnamese citizens, US military personnel and soldiers getting doused in this developing cancers over time. Again, tens of thousands have died. Tens of thousands of US soldiers, veterans here in the United States have died from this already. Even more are still developing these illnesses. And the Republican controlled US Senate said, we’re not going to take care of you. We are not going to extend this massive settlement fund that exists to cover you as well. We’ve got enough to worry about. We’re worried about the cost. They said, we’re worried about the cost. Who cares about the cost? You need more money for this fund. You know where you get it. You get it from Dow and Monsanto. The people who knew how toxic this herbicide was and still sold it to you anyway, and the dangers let people develop cancer and pocketed all the prophets.

They still made more money off of this than they have had to pay out and settlements. So if you’re worried about having to pay for these people getting healthcare, then why don’t you go back to Dow and Monsanto and say, hey, you didn’t give us enough. Fork it over. Unless you want to fight this out in court again because you’ve already lost in the past and there is no reason to think you’re not going to lose again. Now, this is atrocious, especially for the Republican Party who claims to care so much about veterans. Oh, Democrats are horrible for veterans. They don’t care about the Va. They don’t want to fund you. Bullshit. The people who don’t want to fund care for veterans are the republicans in the United States senate and the vote they took last week proves that beyond a shadow of a doubt, us veterans are going to die because they’re not going to be able to get the care that they need because of their exposure to Agent Orange and those deaths come at the hands of senate republicans.