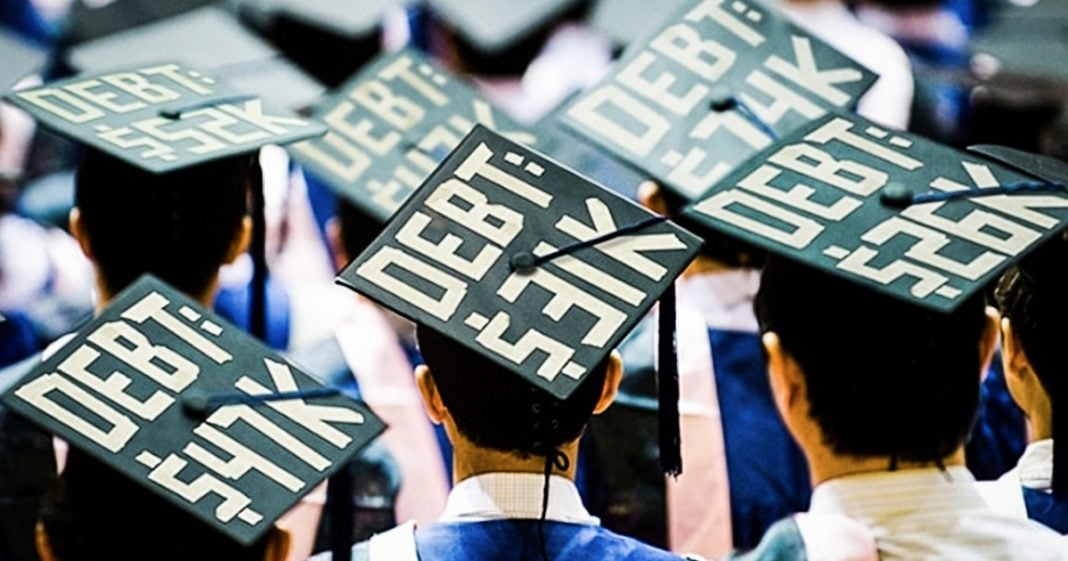 American citizens are now, collectively, holding well over $1 trillion worth of student loan debt. This number is double what it was just before the recession hit, and it shows a growing and very disturbing trend. This debt is going to cause massive ripple effects throughout the economy, and could act as a catalyst for a new recession, as Ring of Fire’s Farron Cousins explains.

According to startling new information, United States citizens are currently holding one point four, six, $5,000,000,000,000 worth of student loan debt, one point four, six, $5,000,000,000,000 in debt because they wanted to get a higher education. This has actually the highest level that that number has ever been and it’s more than double what it was at the end of the recession in 2009, almost one and a half trillion dollars. Here’s the problem with that number, other than the fact that we’re paying far too much for educations that a lot of people aren’t able to use because they can’t even find jobs in fields for which they got a degree. So there’s that problem. But the biggest issue is that if we hit another recession, considering the fact that 90 percent of this student loan debt, well over a trillion dollars is underwritten by the US government itself. If a recession comes and more and more and more and more people default on their student loans, that becomes debt that the federal government owns.

Now they lose that money causing government to further reduce their income, which could only further a recession. It’s a ripple effect. It’s what happens in the economy. It’s typically what happens to begin recessions and that’s what we’re looking at right now. There is obviously one solution and that is debt free college for every American citizen. If we did that, if we took banks and lending and the government itself out of the equation, we wouldn’t be in this mess. We wouldn’t have people trying to figure out whether or not they could even go to college because they can’t afford to pay for it out of their pocket and they don’t want to take on 30 years worth of student loans, but they do. That’s the problem that high school graduates are facing right now. Most of them obviously cannot afford to just write a check to a university every semester.

They have to take out those loans and then they end up paying on them. Once they get out of college, forced to take a job, they may not necessarily want that’s in the wrong field. That doesn’t pay enough because they gotta start paying back those student loans before they get in financial trouble and then they’re stuck and that’s what we’re seeing a lot of happen these days. Here’s something that’s even more disturbing though. It’s not just people in their twenties that are struggling with student loan debt. These are not just recent college graduates. Uh, every age level age bracket across the United States is suffering from billions upon billions of dollars in student loan debt, including American citizens over the age of 61. Those are over the age of 61. Uh, excuse me, over 62. Oh, 62 point $5,000,000,000 in student loans. That’s just people over the age of 62, between 50 and 61, they owe $213,000,000,000 in student loan debt. So this is a problem that stretches across generations. And yes, most of this debt can be attributed to some of these people going back to school. It’s not that they’ve been holding onto this debt for 50 years, but every age group has affected. Every demographic in this country is affected. This is a problem that does not know any boundaries other than it doesn’t affect the one percent. The rest of us continue to get screwed by increasing interest rates. You know, varying payments from month to month because the loan changed hands, it’s got sold to this bank or this one or whatever it is. They’ve restructured your payment plan. Whatever it is,

it’s changing, it’s evolving. We’re the ones getting screwed, but eventually the entire system is going to become unstable and it’s going to come crashing down, resulting in a massive economic collapse here in the United States. That’s what happens. It happens every time that these debts get way out of control, no matter what kind of debt it is, whether it’s debt from the government itself, massive amounts of debts. In this case, one point four, six, $5,000,000,000,000 being held by citizens. Whatever it is, when the amount of debt gets too high, things eventually come crashing down and that’s going to hurt every single one of us.