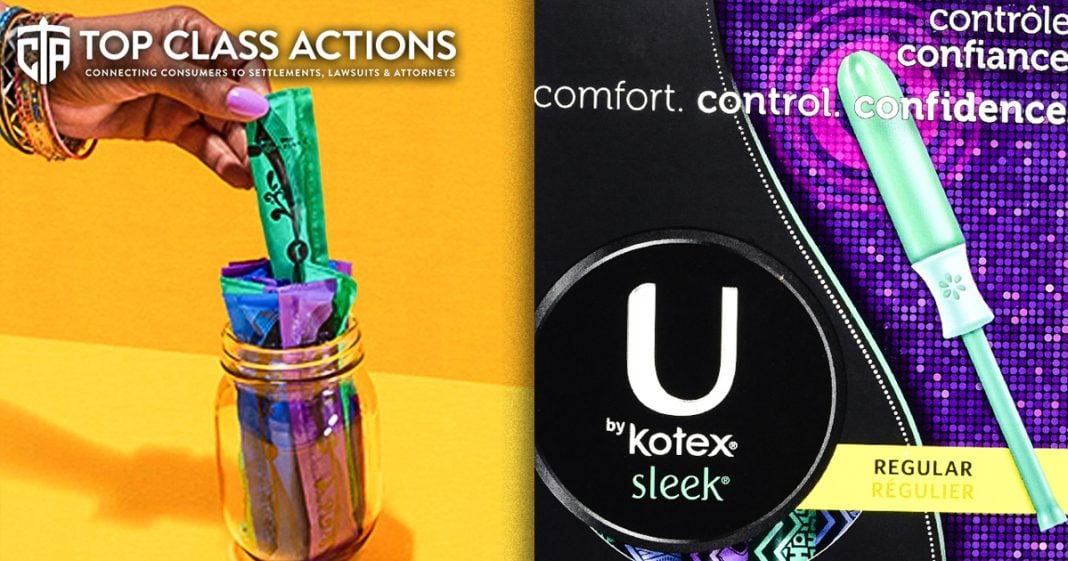 Kimberly-Clark, the company that makes Kotex tampons, has issued a voluntary recall of some of their products after women complained that the tampons were unraveling inside their bodies, leaving pieces of the product inside. These women then dealt with irritation, injury, and infections, and some women even had to have the pieces removed by a medical professional. Ring of Fire’s Farron Cousins discusses this with Scott Hardy from Top Class Actions.

Farron Cousins: Kimberly-Clark, the company that makes Kotex Tampons, has found themselves in a bit of hot water recently after they were forced to issue a voluntary recall due to the fact that some of their Kotex Tampons have been found to be breaking apart inside of women’s bodies. Joining me now to talk about what’s happening and the resulting class action with this particular issue is Scott Hardy from topclassactions.com. So Scott, start by telling us exactly what is happening with these Kotex products.

Scott Hardy: We were alerted to this recall by one of our larger clients. We do a lot of work with their major litigators that are filing a lot of different class actions and holding these companies accountable. And it was shocking that we would have these kinds of issues with women’s feminine products. And what is happening is that they found that these tampons are actually unraveling within women’s bodies and that women are having to go to the emergency room. Woman are to have to go into the hospital and actually having to have them surgically removed in some cases. And they’re having a lot of different problems on something that you would think is relatively a simple product, but as I’ve been educated by some friends, tampons are not a simple product and it’s not just simple cotton that your sense that this is happening to. So the recall by Kotex and Kimberly-Clark is, I think it’s going to be the tip of the iceberg because I think we’re actually going to start seeing some more regulations come into play regarding tampons across the country.

I know in New York state is actually working on things now because women are not alerted to exactly what they’re putting in their bodies. I thought that it’s cotton, you know, they’re going ahead and they’re using a tampon and that’s simple. It turns out that is just not the case. Women are actually buying organic cotton tampons so they know 100 percent that what they’re putting in their bodies is cotton and nothing else because tampon manufacturers, allegedly Kotex may be one of them, are including things like rayon and other manmade materials within tampons which could potentially harm women after long term use.

Farron Cousins: And so this is really interesting and you know, I think what people need to understand is obviously this is a product that is meant to go inside a woman’s body. They have an expectation that this thing is not going to fall to pieces while it’s being used. But that’s exactly what’s happening here. They go to remove it or throughout the day they notice something’s not quite right and then they can’t get the entire thing out. You know, the pieces of this tampon remain stuck inside of them. They’re incurring medical bills from this. They’re getting infections. There’s all kinds of irritation and inflammation that come as a result of this. So this is a severely defective design in this product and I refuse to believe in many ways that Kimberly-Clark was not aware that this was gonna happen. I mean products go through testing. They understand exactly what’s going to happen to this product. It probably, as we’ve seen in many instances, in everything from pharmaceuticals to automobiles, probably just didn’t want to spend the few extra pennies it would take to make sure that this product wasn’t going to fall to pieces when it’s used.

Scott Hardy: Right, exactly. I mean, women are depending on this product and it’s really sad when you’ve got these companies that are making thousands upon thousands of these, sending them out. They may have been aware that there was a manufacturing defect. Who knows how long they waited to actually issue that recall and alert women of this problem when women are sitting there going, you know, they might not have a, you know, the majority of this product stuck inside them that had unraveled. Maybe it’s a small piece and they start getting infections. They start getting sick, they start suffering when Kotex and Kimberly-Clark might’ve been able to act earlier to alert users of this tampon and have them throw it out so they don’t have all of these medical issues that are inherent from a tampon that, that was made incorrectly. And you know, we’re seeing thousands of submissions from people right now that are actually impacted by this.

And so I’m happy that we’ve got some, some big lawyers behind this that are going to be fighting Kimberly-Clark, including Greg Coleman, Dan Bryson, and their law firms that, you know, they’re going to hold Kimberly-Clark accountable and they’re going to work really hard for the victims to make sure that they’re compensated for this problem. And anyone who bought these faulty tampons, you know, should be able to get paid in the long term and we’ll be making sure to keep people alerted as this case progresses as well. Because this is going to be a long drawn out fight. I’m sure even though Kimberly-Clark has already admitted fault in making these and distributing these faulty tampons.

Farron Cousins: And what’s really interesting too is that this is not just a small group of people. This wasn’t just a one particular store that was selling these or one area of the country. This was nationwide and it covers some of these Kotex Tampons that were sold over the span of two years. I mean, for two years, women were out there buying these things, putting them inside of their bodies and it’s likely, can’t say that it’s for certain at this point, but it is very likely that this company, Kimberly-Clark, knew exactly what was going to happen with these products. So we have, you know, potentially two years worth of women who may have suffered as a result of this and I mean, that is a, that’s a massive class. You know, I mean, there’s likely to be a lot more submissions as this goes forward and as this case actually gains some attention because that’s the problem right now. The recall covers products that were sold, at the latest date was October 23rd. So there was a voluntary recall after October 23rd. Well, here we are two months later. This is the first I’ve heard of this story. This seems like it’s something that should be out there and in the national media, yet it’s not so women have no idea what these products can do, what they have done, that they were recalled or more importantly that they now also have a course of action to take against Kimberly-Clark.

Scott Hardy: Right. You know, we want to make sure that as many people out there as possible know about this, that women who have these defective tampons, that they are throwing them out because they are a danger to women. It might just cause some irritation or it could cause major infections and be very harmful. So you know any women that have these U by Kotex Sleek Tampons, check to see if you have the effected lots. Throw them out and don’t use them or else you definitely could have some major, major consequences that sadly are not your fault at all. They are entirely on Kimberly-Clark and Kotex.

Farron Cousins: Absolutely. If anybody wants any more information about this issue, to take a look at which products specifically have been recalled and may contain this defect, check out the link in the description of this video. It’ll take you to topclassactions.com where they have all of the information necessary. Scott Hardy, topclassactions.com. Thank you very much for talking with us today.