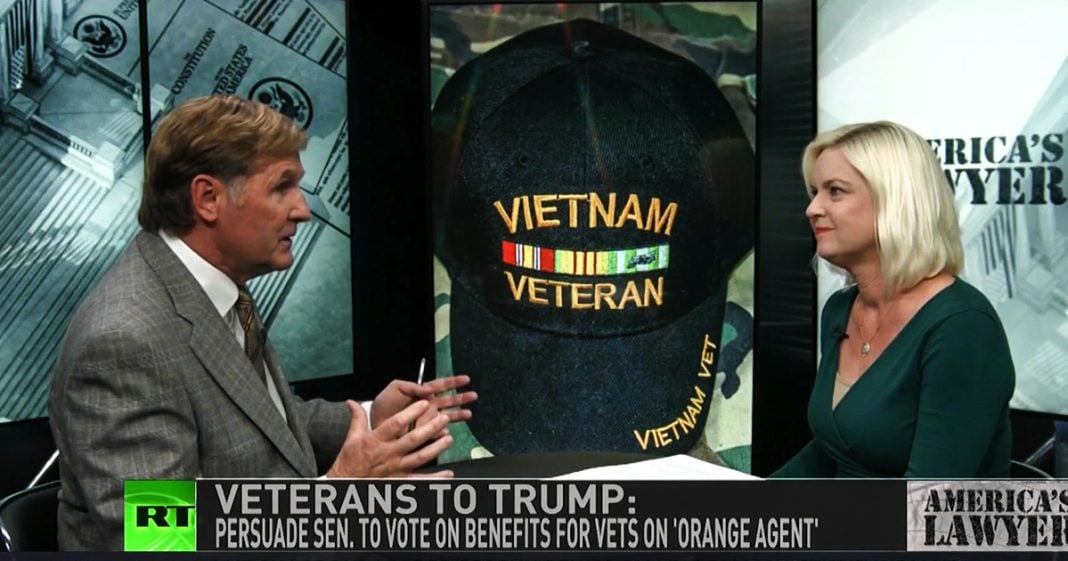 Via America’s Lawyer: Legal Journalist Mollye Barrows joins Mike Papantonio to talk about a bill that would extend benefits to thousands of ailing U.S. veterans hits a last-second snag in the Senate.

Mike Papantonio: In a last ditch effort to gain a vote before Congress adjourns for this session, next week, Veteran groups have urged President Trump to persuade senators to vote on a bill that would make tens of thousands of ailing Veterans who have served on ships and territorial waters off Vietnam, eligible for VA disability compensation and healthcare. Joining us to talk about that is Mollye Barrows. Mollye this story, the thing, this is infuriating on so many levels because you have one Senator. Was it House of Representative or Senator?

Mollye Barrows: It was a Senator.

Mike Papantonio: Senator that says, no, we want to delay this now. Okay, let’s put this in perspective. We’re talking about was about $5 million dollars that they’d have to spend here. Some people say it could be as little as $1 million.

Mike Papantonio: Okay, talk, lay it out for us a little bit and tell us what this story, where it develops.

Mollye Barrows: Basically yes. And you’re more familiar with most with what Agent Orange is. As you know, it’s an herbicide that the US government used in Vietnam during the war to basically destroy crops and forests so that they could see the enemy.

Mike Papantonio: And it destroyed human beings too.

Mike Papantonio: Our soldiers, it destroyed their lives too, but go ahead.

Mollye Barrows: Led to many, many lawsuits from our own people. Those in Vietnam and it also is, as you know, it’s been connected to any number of diseases and cancers and as well as genetic problems.

Mollye Barrows: Yes, and causes genetic problems that they’re still continuing to see, and so this bill was going to address some of that. It was going to extend benefits to more Veterans, some of their children, especially if they can be shown as part of research to determine what sort of genetic impacts being exposed to this it had and some of the money was even going to go to Vietnam, victims in Vietnam, whether they needed medical treatment as well as to take a look at the environment, see what, if any, restorative work could be done there. So they had been trying to pass this through the House had passed it through unanimously and they needed, you know, basically unanimous consent for this to move forward for the approval process. And this one particular Senator, Mike Enzi, this Republican from Wyoming said, wait a minute, it’s too much money. It’s going to be five and a half million over 10 years.

Mike Papantonio: Let me put that in perspective for you, okay. This year, just in subsidies that we give the oil companies $40 billion dollars worth of subsidies that we’re saying to the oil companies that are making more money than third world countries that, hey, you know what, we need to give you a subsidy so you can stay in business. It’s as low as $40 billion. It’s been as high as $150 billion that we’re giving to all these people as subsidies. Now, we can’t spend a million and a half dollars to say to these Veterans, you know what, you’ve proven it. The dangers of this product has been proven. I mean, it’s not just, it’s not just the first generation of people who were exposed to this, this product that by the way, Dow Chemical clearly understood what the dangers were.

Mike Papantonio: Okay, so it wasn’t just first generation, it was second generation and third generation. So the study that this man’s talking about is, we want to see how far removed it is. We don’t want to spend any money, any money here before we know this. I mean, isn’t that it?

Mollye Barrows: It is. Well, and it’s interesting, because you see the arguments even among the governmental offices, not just the legislators. You had the VA who’s the one leading the charge with these excuses of cost and basically saying, well, we’re just going to wait for this next study to come in, that the results are due in 2019. And then you have the guide, the Congressional Budget Office. They’re saying, no, no, no, it’s not going to be five and a half million over 10 years. We’re just talking $1.1 million.

Mike Papantonio: $1.1 million, now let me add that perspective again. This cat who’s probably signed off on this, I don’t know this, but if we looked at his voting history, we would find that he said it’s okay for a corporation to point, to park $400 billion dollars offshore in a Cayman Bank and not pay taxes on it. It’s okay to do that. But you know, a Vietnam Veteran who gave everything in that war that was already based on really, really questionable, questionable reasons for even being there.

Mollye Barrows: He was the lone Senator who managed to block this from moving forward.

Mollye Barrows: Well, they aren’t giving up on it. They’re going to try to, you know, again after the Christmas break, but let’s see. We’ll see how successful.

Mike Papantonio: I think it’ll pass, but it’s really, tells the story about this guy. Mollye, thank you for joining us.
Mollye: Absolutely. Thanks Pap.