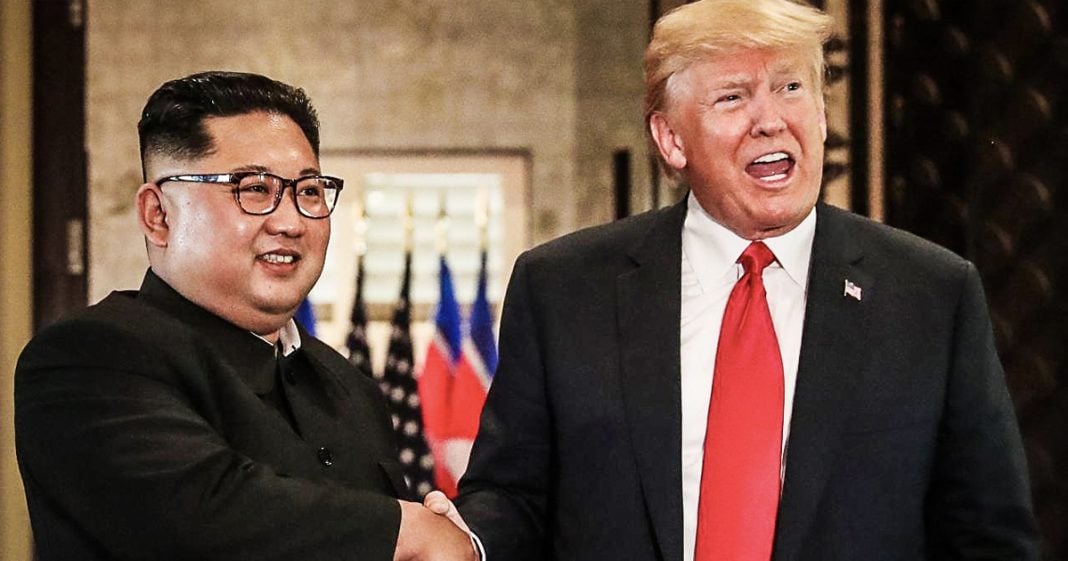 North Korea is accusing the United States of either misinterpreting what kind of arrangement they made with Donald Trump just a few months ago, or that we are simply lying about it. But either way, North Korea now says that they aren’t going to give up their nuclear weapons until the United States does the same thing. Trump got played, for sure, but the demands being made by North Korea aren’t all that crazy, as Ring of Fire’s Farron Cousins explains.

The deal more, I guess I should say, the alleged deal that the Trump administration made with a Kim Jong-Un and North Korea continues to fall apart every week. North Korea, according to a new report in the Associated Press, has now said that they have no intention of ever done nuclear rising unless the United States basically does the same thing. So in spite of what Donald Trump told us after his little photo op that he did with Kim a few months ago, North Korea is not denuclearized. We have no evidence to suggest that they have shut down any of the sites that they claimed they were going to shut down. In fact, aerial surveillance shows that they’ve actually been upgrading some of the sites. So literally nothing that Trump said happened at their meeting has happened and North Korea now says, yeah, none of that is going to happen. We don’t even know why you’re saying that. We said we would do it according to the AP report.

So North Korea is out there right now saying either he misinterpreted what we said or he’s just flat out lying about it because we as a country are not going to die. Nope. Until you d nuke, uh, specifically from the Asian continent. We do not want that veil of nuclear protection from the United States over there. But it is broader than that. It is denuclearization of the United States. And I got to be honest, that is not a crazy demand, right? I mean, when you think about it in these terms, the United States has the largest nuclear arsenal out there, right? I say, you know, US in Russia, we’ve got that constant. We’ll build a few more to put our number over the top. But, uh, you know, we’re, we’re either at the top or were tied for first in number of nukes we have. And we as the leader in nukes, as the only country that’s ever dropped nuclear bombs on civilian populations ever.

Uh, we have the audacity to go out there and tell other countries, you can’t have these just us, these are ours. You can’t have them or we’re gonna kill you. That’s what we tell them. Why? Why would any country in the world look at us with, you know, 600 nuclear bombs ready to fire at the incident and say, hold the hell up dude, I can’t have these, but you have them and you can hit my country in 30 minutes with them. How? How is that okay? How, how, why would I agree to this? This makes no sense. I’m going to protect myself from you because you seem to be a little hostile towards anyone that’s not American and even some Americans I. You can’t necessarily blame other countries with this and I am sure as hell not trying to sympathize or anything with North Korea, they are horrible.

Kim Jong-Un is a terrible human being. What he’s doing to his population is criminal and the man needs to be thrown in the Hague and put on trial for crimes against humanity. But I am saying from a rational thinking standpoint, if we’re sitting here on a throne of nuclear weapons, we have no high ground to tell anyone in the world, no matter how evil they are, that they can’t have them because nobody on this planet, no country has ever done with nuclear weapons. What the United States has done, we want other people to do. We need to lead the way by doing it ourselves. On until then, it is incredibly irrational for us to think any country on this planet is going to listen to us when we tell them that they can’t have these weapons that we love so much.