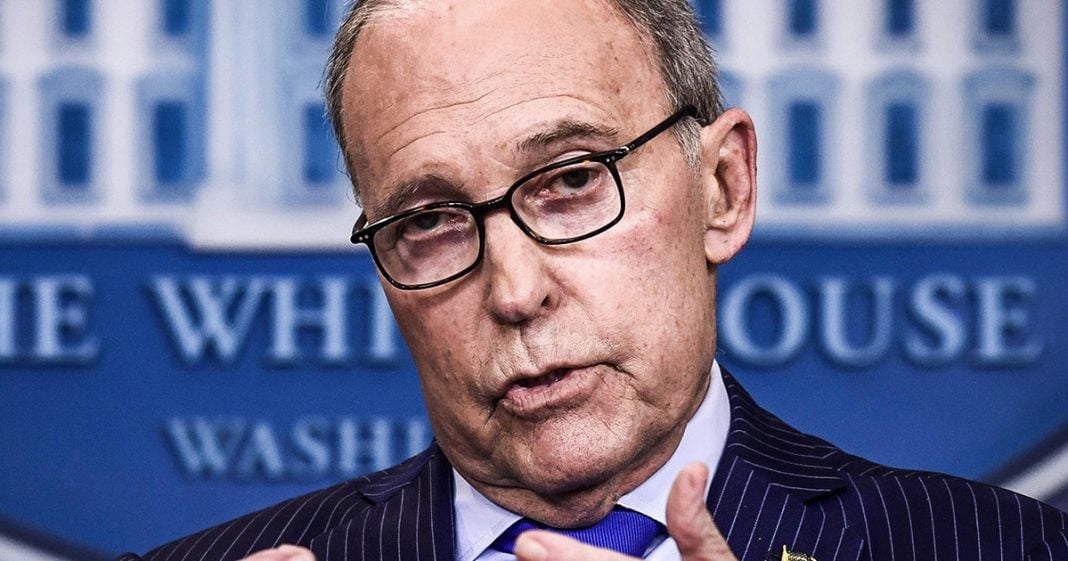 Trump’s economic adviser Larry Kudlow has signaled that the administration is preparing to roll back subsidies for electric vehicle purchases and renewable energy programs, but there will still be billions of dollars available in subsidies for fossil fuel companies. We are moving backwards as a country, and the Trump administration are the ones who have thrown this country into reverse. Ring of Fire’s Farron Cousins discusses this.

On Monday of this week, Donald Trump’s economic adviser, Larry Kudlow, announced that the United States, the Trump administration, is going to be ending subsidies for electric vehicles and other renewables in the next two years. Money to incentivize people to save energy, to be more efficient to, God forbid, help the environment a little bit. We’re going to kill those. You no longer are going to get a big tax break for buying an electric vehicle. You no longer going to be able to write off part of the cost of putting solar panels on your home or buying energy efficient appliances. We are ending all of that because to hell with the planet will all be long dead by the time the really bad parts of climate change effect this entire country. That’s basically the message that Larry Kudlow and by extension, the entire Trump administration and Republican party are sending to the United States right now.

Not just because they’re killing those subsidies, but because they’re not killing the $7,000,000,000 in subsidies that we give as a country every single year to fossil fuel companies. Some of the most profitable companies here in the United States, you know Exxon Shell, Chevron, BP companies that make 20, 30, $40, billion dollars a year in profit. We fork over another $7,000,000,000 to them each year out of our tax dollars. Just for the hell of it. Just for the hell of it. Think about that. Exxon who routinely makes profits close to $40,000,000,000 a year. We just give them extra money. Our tax dollars, $7 billion a year total between all fossil fuel industries just because, because we we can because we have it because there’s literally nothing better in this country to spend that on. Maybe not Medicare for all. Instead Debt Free College, paying down student loan debt. Something. Anything better than giving it to the people who are not only poisoning the planet, poisoning citizens, but they’re lying about it and have been sent since at least the 19 seventies.

Their own documents show that, but sure. Let’s keep forking over $7,000,000,000 to them. Let’s cut subsidies for renewable energy. Let’s just have a massive party right now and end this planet as we know it because that’s what Republicans are pushing us toward. That’s what they want. That’s what’s going to happen under their policies. This past midterm, 2018 was a very strong rebuke of everything that Republicans and conservatives stand for. Maybe not in the Senate, but at least in the House of Representatives. They’re pushing a green new deal. Republicans led by Trump and Kudlow are trying to take us backwards. They’re taking us back in time. Unfortunately, we can’t take the actual planet back in time to when it wasn’t burning down due to our own emissions, but they want to take policy back to the 19 seventies, sixties, hell, twenties, tens, whatever it is. They just want to burn it all down, get as much money as possible and screw over the industries and the consumers who were actually trying to make the world a little bit brighter for the future generation. That’s what the Republicans stand for today.