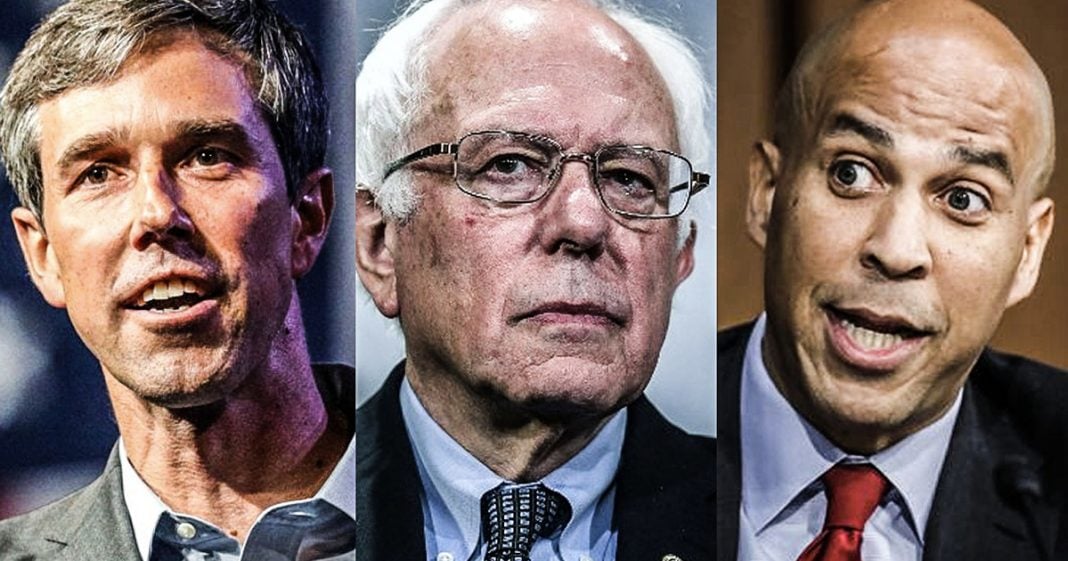 There are roughly a dozen Democrats in the country who are toying with a 2020 presidential run. While there’s nothing wrong with having a large field of candidates – in fact, that’s a very GOOD thing – what the media is doing right now is absolutely horrendous. They want ratings, so they are shoving every possible candidate that they can in our faces without ever talking about policies, ideas, or anything that matters. Ring of Fire’s Farron Cousins discusses this.

So we’ve been kind of bombarded recently with talk of the 2020 Democratic presidential election, you know, I mean, look, we’re probably what, six months away from having debates start, you know, maybe a month or two at most away from people officially declaring. But here’s the thing, as it stands right now, nobody’s officially declared. People have expressed interest. They said, I have not ruled it out. I’m considering, but nobody has officially stood up as of this recording. It said, I am so and so and I am running for president of the United States under the Democratic Party ticket. That hasn’t happened, but that also hasn’t stopped the media from nonstop speculation about who the Democratic nominee is going to be. Let me read you this list. All right. I’ve got a list right here of just some of the names we’ve heard about in the last few weeks alone. People who may or may not be running for president, we got Biden, Beto, Bernie, Booker, Gillibrand, Gillam, Warren, Harris, Michelle Obama, Hillary, Tulsi, Gabbert, Oprah, The Rock.

I mean, come on. Do we really need to go ahead and make this a horse race right? Right now. How about we just sit back and wait and see who is going to announce that they’re officially running for president? A story from the hill came out this past weekend that said that vitamins people are talking about possibly running with Beto as his running mate because they want to get the young people, you know, Biden would be 77 at the time of inauguration if he were to win in 2020 oldest president to be sworn in. And that’s actually true for a couple people running for president regardless of what you think about them. It’s the truth, but they’re talking about running with Beto because they want to attract young people. Then want to get that energy, you know, have people excited to vote for him again.

So here’s the thing, and I hope the media is listening because instead of just creating a horse race of the will, they won’t they run for president. Who knows, but let’s speculate so we can get those clicks. How about you just talking about issues? I know it sounds crazy, right, but if you want to talk about attracting young people, talk about issues that matter to them. Not a personality. That’s the problem I have with this entire speculation about 2020 because it’s not about issues. It’s not about things that matter. It’s about who can defeat Donald Trump and who’s just the most likable, who’s kind of fun and cool and hip and you know, not too old, but not too young. That shit doesn’t matter. What matters is where these people stand on the issues. Yet you see all of these articles coming out and they’re not talking about him.

You know, joy Reid actually had a tweet over the weekend that I saw where she was asking people the most important thing they wanted to see in the next Democratic nominee, not a one thing on her list was an issue. It was that it is a woman, that it is a person of color. It was things like that. Things that. I hate to say it, but those don’t matter. Don’t look at somebody and just say, I want to support anyone who fits these criteria based on how they were born. Look at issues instead, don’t focus on the face. Don’t fake focus on the name. Focus on where they stand on the issues because it’s not always true that just because somebody is one thing that they’re going to be great on that issue. We have seen that too many times, and I’m not saying that, you know, ignore those things.

Go vote for the old white man. One hundred percent. Not saying that, but we need to stop with this contest of personality to see who is going to be what. Let’s focus on issues and stopped dumbing down the 2020 presidential race because that’s what’s happening right now and the media, the corporate media, they’re the ones out there doing it. They’re dumbing it down, trying to make it about, well, do you need to have a woman? Do you need to have a man? Do you need to have a black man? Do you need to have a Jewish man? None of that matters. What matters is that we have a strong candidate who understands the issues, who wants to do something about them, and who wants to ultimately make a better life for every single person in this country, regardless of their religion, their race, their gender, their political party, somebody that wants to help everybody. That’s what the public wants. Why can’t the media seemed to understand that? Well, I think we all know the answer for that. They want the clicks. They want the eyeballs, so at least for the next few months, possibly even longer, we’re going to have to deal with them making the 2020 presidential race absolutely obnoxious, annoying and stupid as hell.