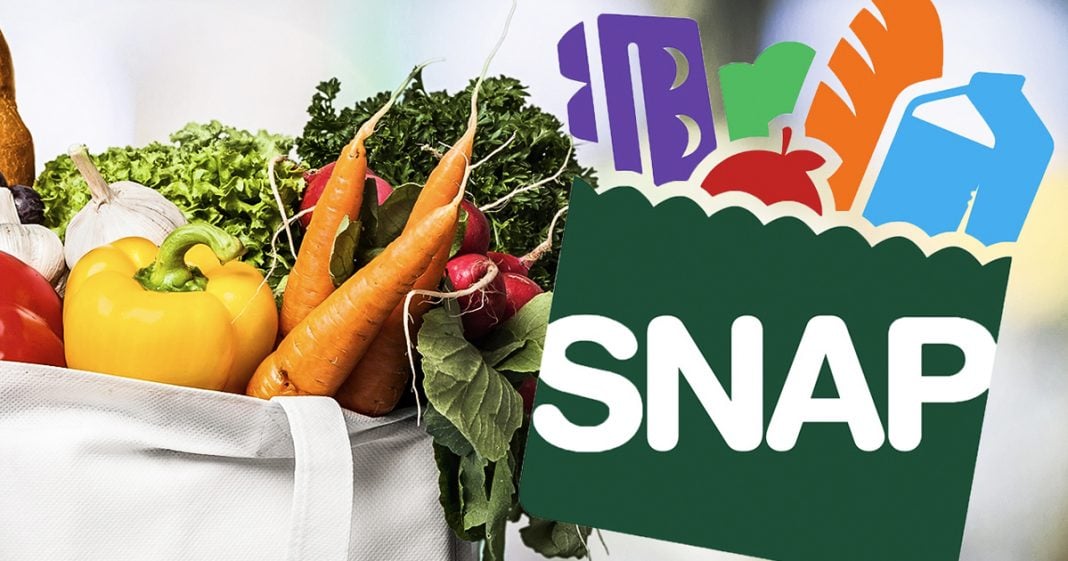 The Trump administration, via the USDA, has announced new plans to reduce the amount of aide available to needy Americans. The plan involves changing the work requirements for food stamps and they would make it impossible for the disabled or those who can’t find work to continue receiving government assistance. Ring of Fire’s Farron Cousins discusses this heartless decision by the administration and why it is going to help hasten economic decline.

Well, Christmas is just a few days away now, and so the Trump administration decided to give an early present to needy families all over this country, and that present is, we’re about to cut your food stamps and there’s nothing you can do about it. You see Donald Trump and the Republicans had actually been working on cutting food stamps. They had been wanting to do that for quite some time now. Uh, but they tried to put it in the farm bill. Well, it did not survive in the farm bill farm bill gets signed anyway. So the Trump administration got a little more clever with it. How can we cut food stamps without having to go through Congress? And the s da came up with a brilliant plan. They just issued a new set of rules this week that increases the work requirements for people receiving snap benefits. Here’s the way it currently works.

If you are receiving snap benefits, there are work requirements. I think you’d get about three months without having a job before you get kicked off. But if you’re in a state where the unemployment rate is 10 percent or more, you can get an extension on that because obviously you’re in an area where work is hard to find. The government took that into account. The new rule lowers that unemployment rate from 10 percent to seven percent. This is going to result in a few million people getting kicked off of the food stamp programs. Now, these could be people who are just unable to find work. They could be people on disability who are unable to work or have an exceptionally difficult time finding work. Whatever the reason is, the Trump administration doesn’t care. We don’t want you to keep suckling off the government’s teat. We want you to get off your ass and go get a job.

Right? And not what the Republicans always say, get a job. You Bum. A lot of these people can’t. They want to. They don’t want to sit there and just have to have the government take care of them. They want to take responsibility, but due to circumstances, a lot of them not of their own making, they’re unable to. Whether it’s a faulty economy in the city or state where they live or an accident that happened to them that prevents them from being able to properly work. They didn’t do this to themselves, but they’re the ones being punished. Meanwhile, the USDA also wants to cut the program by one point $6, billion dollars annually, so not only are fewer people going to be receiving benefits now, but the benefits the people do receive. We’re going to reduce those because, hey, we just gave the wealthy a big tax break last year and we’ve got to pay for it somehow.

Right? I, to me, this is Paul Ryan’s dream child right here. We get to screw over the working class poor and then screw them over a little more by just reducing the total amount of benefits. Anyway, after kicking so many people off of these benefits, and this is what this administration prioritized, right in the days before Christmas. I mean, I can’t think of anything more heartless, deceitful and disgusting than what they have done to these people. Right in the heart of the holiday season. Maybe if Trump gets visited by three ghosts on Christmas Eve, maybe they’ll decide that this is a bad idea, but I seriously doubt any of that’s gonna happen. Cutting aid for needy people in the United States has been the Republicans number one agenda item for more than a decade. They finally found a president heartless enough and clueless enough about what the public’s going to view this like a to actually go through with it. Trump is their guy and they are his guys. There is no distinction anymore between Donald Trump and regular republicans because they are all one in the same with the same goal of screwing over as many poor people as possible.