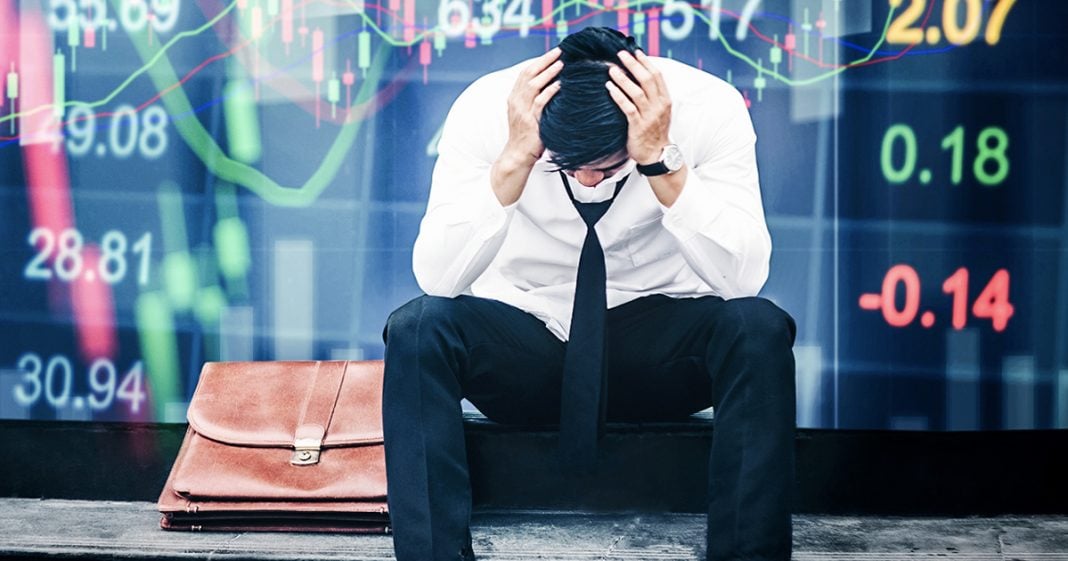 History continues to repeat itself, and the same scenarios that occurred prior to the economic crashes of 1929 and 2007. Wages are down, thanks to inflation, and wealth is getting overly concentrated at the top. Nothing is being done to help American workers, and as their buying power continues to decrease, a recession won’t be too far behind. Ring of Fire’s Farron Cousins discusses this.

Our economy here in the United States is essentially a castle made of sand sitting on top of quicksand and there was a bulldozer headed straight for it, and that’s actually been the case for a long time now, but what’s really concerning is the fact that American workers are actually making statistically less today than they were right before the great recession hit in 2007. In fact, most wages have stagnated, so people, paychecks are literally the same as they were back then. The only differences. Inflation has gone up. Healthcare costs have gone up, childcare costs have gone up, costs of education have gone up. The cost of regular goods and services have all gone up. While most Americans have not seen their paychecks increase at all, and those who have, most of them have not seen it keep pace with inflation, so they’re buying power is less today than it was 11 years ago.

That’s a massive problem for the economy, for reasons that I think should be pretty obvious to everyone. Obviously when American workers, the people who 80% of this country lives paycheck to paycheck, meaning when they get paid, 100 percent of that money gets spent. They’re not putting it in the stock market, they’re not able to put it in savings, they’re using it to pay off debt if they have enough and the rest of it is just used to survive. Eighty percent of people in this country are in that situation today. The startling thing is the fact that the economic situation we’re in today is identical to the economic situations that lead up to the, uh, you know, a massive economic crash, the Great Depression in 1929, the great recession in 2007, we have recreated the exact same situations that lead to those. Why? Because we don’t tend to learn from history very well.

You know, we, we think that we can go forward and we’ll regulate. Banks will regulate, corporation will regulate everybody for a little bit. We’ll tell corporations you’ve got to give your workers raises and maybe some of them will, some of them won’t. Maybe they’ll increase benefits for awhile, but as soon as everything looks normal on paper again, which is what happens now, they start cuts. We start regulatory cuts that allows big banks to once again, game a gamble with our pensions, gamble, with our savings gamble, with our mortgages, without our knowledge, corporations start cutting back on benefits a little bit, laying off workers, creating more unemployment. Job growth in the United States while still up is slowing down. That’s not a good sign for this economy, but the worst overall sign again, is the fact that American workers, average American citizens, the bottom 99 percent, they are losing their buying power.

When that happens, obviously they spend less money. You spend less money. There’s less money circulating throughout the economy. That’s what creates these ripple effects that create a recession because less money, less economic activity, more layoffs, which leads to even less money and so on and so forth. It is a self repeating cycle until something comes in to right that cycle right now, nothing is coming in. Nobody is making this better. Nobody is working to make this better, so we’re just stuck here in this downward spiral watching everything begin to crumble while Republicans in DC keep whistling past the graveyard thinking that we can give tax cuts to major corporations and everything’s gonna. Be Cool. It’s not. Things are getting bad, and speaking of those corporations, you know the, the wealthy elite, the top one percent, they’re actually starting to lose money now to considering the fact that the stock market’s going to close out this year at its lowest point in the last decade. So they’re going to start to lose money too. And that’s only going to exacerbate the problem of American workers not having enough money to get by this economy. Again. It is a sandcastle sitting on quicksand and that bulldozer headed this way is starting to speed up.