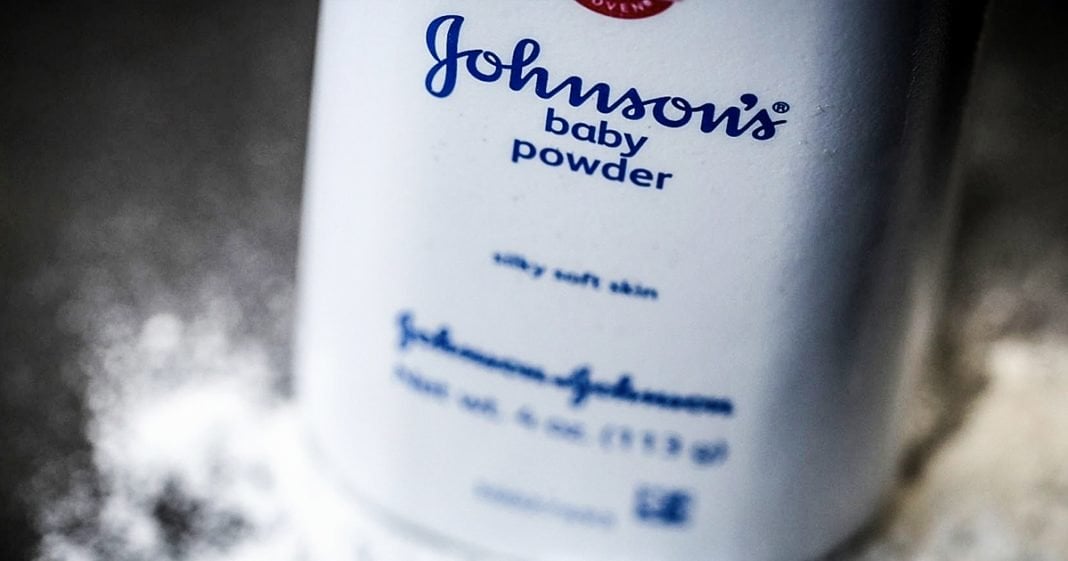 This week, a judge in Mississippi struck down a motion by Johnson & Johnson to have a recent $4.69 billion verdict against them for hiding the dangers of their talcum powders. This is a huge victory for the plaintiffs in the case, who were made up of 22 women who developed cancers after years of using J&J’s product. Ring of Fire’s Farron Cousins discusses this.

We know now you know the massive bombshell report that came out last week showing Johnson & Johnson knew as well that a lot of their talcum powders happen to contain asbestos fibers, so when those asbestos fibers get in your body, whether it’s because you’re putting the powder in the sensitive areas of your body that are open to the outside, the areas where Johnson & Johnson specifically told women to put it, those as best as fibers migrate, they get into the ovaries, they get into the uterus, they get into other body systems. If you inhale them, they can go when your, your, your nose, your throat, your lungs, everything, and that’s what causes the cancer. Those as best as fibers get embedded in the body, the body tries to do what it can, can’t really get rid of them so it creates these cancerous tumors and that’s what leads to death.

Johnson & Johnson knew this. The documents came out last week and that massive Reuters report, they knew that this existed. They knew that this problem was there. They just chose for more than 40 years to not tell the public to not put a warning sign. When the FDA came sniffing around, they told the FDA, don’t worry. You don’t have to put any additional regulations in place on us because we’ll be more than happy to police ourselves and because our regulatory system is such a complete joke, the FDA said, oh, hey, that sounds awesome. We don’t have to do anything. You’re going to do it. Oh Great. Keep up the good work. They’re Johnson & Johnson that happened in the nineties under the Clinton administration and Johnson & Johnson continued from that point to lie about the dangers associated with their talcum powder. Not just the as best dose in there, but the fact that the talc particles themselves could also become embedded in a human body and lead to cancer. So this judge was 100 percent right to tell Johnson & Johnson that you’re damn sure going to pay that four point six, $9 billion dollar verdict and you need to get ready because this is just one of the first out of many hundreds, possibly thousands more cases where you’re going to have to open up your checkbook and make good for lying to the public for over 40 years.