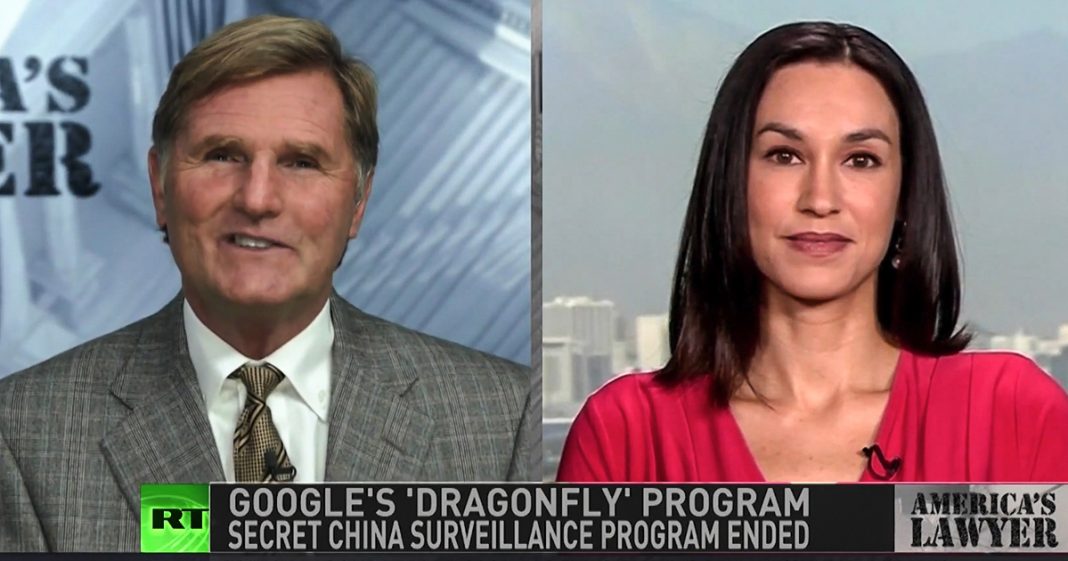 Mike Papantonio: Google has reportedly killed the backbone of it’s controversial project to create a censored search engine for the Communist Party of China. The announcement comes after human rights groups and employees rose up in opposition to the project. RT correspondent, Brigida Santos joins us now with the details. Brigida, first, the obvious, tell us about this secret, this secret search engine. What’s it called and what kind of information did it aim to censor?

Brigida Santos: The secret search engine known as Project Dragonfly is a mobile application built to be used on China’s most popular operating system, which is android. Now, if it had launched, the project would have impacted a vast majority of the countries’ internet users whose main source of connectivity is through a mobile device. According to leaked documents, the search engine relied on a data analysis system to log common words and websites that the Chinese government could then black from search queries. This means Chinese citizens wouldn’t have been able to use the search engine to look up words like human rights, find information about historical events, including the Tiananmen Square Massacre, access to accurate data about air quality and so on.

Mike Papantonio: Isn’t it remarkable that Google was even at the table talking to them about this? I mean, let’s, you know, let’s be honest. Google knew exactly where it was going to go. Google knew exactly how it would be used and I wonder whether or not they’ve even created something like some variation of this to be used in the United States. There’s certainly plenty of criticism right now. You have conservatives that are saying, yeah, they’re kind of using the same kind of system to filter out anything that has to do with conservative discussion or maybe maybe left wing discussions that is considered too fanatical by Google. I don’t know who Mr. Google is who makes those decisions, but it’s interesting because you have to think maybe it went on here. How did Google employees help kill the main ingredient for this project, Brigida?

Brigida Santos: At the end of November, about 1500 employees signed an open letter calling on Google to cancel the project and demanding more transparency about the ethical implications of their work. Prior to the leaks, most employees were completely unaware of the project’s existence. Google’s unofficial motto is don’t be evil, so it’s decision to start working on the project in the first place is incredibly shocking, especially because Google completely pulled its search engine out of China in 2010 over government censorship. Thanks to backlash within the company, Google has now been forced to kill all work on the data analysis system that powered Project Dragonfly.

They understood this was going to be a way for the government to actually get involved in that process of censoring not only censoring, censoring, and then hunting down the people who responsible, but I find it remarkable that the leadership of Google even sat down at the table with these thugs to do that. Look, Google’s CEO faced questions about the project. What were the key takeaways when he had to face those questions?

Brigida Santos: Last week, CEO, Sundar Pichai told Congress he had no plans to launch a search engine for China “right now.” Now he claimed Dragonfly was merely exploratory, but his testimony leaves the door open for a future launch, which leaked transcripts hinted could come sometime during the first quarter next year, so we’re going to see in the coming months whether this project is really dead or not.

Brigida Santos: No, it absolutely isn’t. Employees had previously protested against Google’s involvement in helping the Pentagon with an AI drone footage monitoring project. Google responded to those protests by vowing not to renew his contract after it expires next year. That’s really nice to see the workforce standing up against corporate tyranny. I would like to mention that you know, these people are wealthy. They’re programmers at Google, a very well to do company. They’re making good money. It’s not always the case with other companies that are committing these types of abuses.

Mike Papantonio: Yeah, well Brigida, I think we’re just seeing the edge of this because I think what’s going to spring out from this is what else are they up to? Because obviously they’re, they’ve developed a type of, they’ve developed the mechanism to do these kinds of searches to factor in these types of searches and I think people are going to be asking questions about are they using it, how are they using it? Have we already been a victim of this in the United States and other parts of the world? Thank you for joining me Brigida.