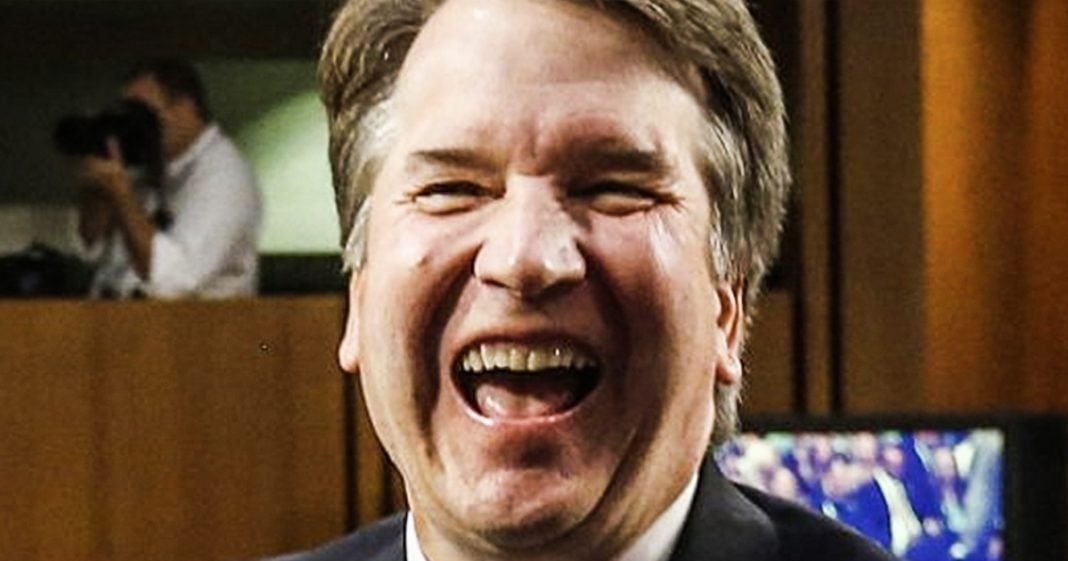 Had Brett Kavanaugh’s confirmation process been put on hold, he would no longer be a sitting judge in the United States. But, because Republicans decided to push him through as fast as possible, he basically became immune to punishment for his cover ups and lies in his Senate testimonies. Kavanaugh is now, essentially, above the law, and his entire confirmation process proves that we have to change things in our judicial system in order to restore its integrity. Ring of Fire’s Farron Cousins discusses this.

If you’re like me, you’re still pissed off about the fact that Brett Kavanaugh is currently serving a lifetime appointment on the US Supreme Court, and you may be mad at him for different reasons than me. I’m mainly mad about the fact that this man is now basically considered above the law. A few days ago I talked about the fact that that 10th circuit out there in Colorado, the group that, uh, Roberts had passed on the investigation to so that they could be impartial, not influenced by anything. Uh, they came back and said, wow, you know, uh, we really can’t do anything about them now about all the perjury and lying to the Senate that he did because he’s no longer a district judge. He’s on the Supreme Court. He’s untouchable. What the hell do you want us to do at this point? And it dawned on me, that was by design. That’s why Roberts did that because had Robert’s been the one to do the investigation, he would have been able to kick Kevin off the court.

They could have had them gone, but Robert’s knew this. So he sends it to a District Court, a circuit court which only has jurisdiction over other circuit court judges. So once Kavanaugh was confirmed, in spite of the fact that the investigation was going on into perjury, once he was confirmed there was nothing, this investigation could do nothing. Roberts knew it, Kavanaugh knew it, and that’s why it was planned out this way. So here is what I have to say other than the fact that Kevin is still an absolute scumbag and that is we have to completely remake the way that judges in the United States are appointed. We have to immediately do away with any concept of lifetime appointments. That’s absurd and I don’t think anybody on the left or right with disagree with that. Judges should not be able to serve for a lifetime. Judges should not be above the law and yet that is what’s happening in the United States today.

One rule that it needs to immediately be put in place is that if there is an ongoing investigation into a nominee, a judicial nominee, they cannot be confirmed. Not until that investigation has completed nothing. The Senate does nothing. The president does could surpass that. If they are under investigation, it is forbidden for the Senate to vote on them. That is a rule that needs to be passed yesterday. It’ll never happen. Why? Because the court system in the United States is one of the best places for both Republicans and Democrats to play politics. They barter, they barter seats. You know, it’s actually a common practice. Ian Millhiser ThinkProgress pointed this out the other day that, you know, whenever it’s a judge under consideration for, you know, say it’s Massachusetts, the senators from Massachusetts are going to have a lot of pole with that particular judge and their nomination. Uh, you know, they kind of get the oversight of it a little bit to an extent.

At least that’s the way it used to be. It’s changing now, thanks to Republicans, but that’s Kinda how it was. So there was this kind of quid pro quo, like, all right, you know, you’re going to let me kind of give input on the judge for my state. I’m gonna let you do what you want to do for your state. You’re going to put up a hard core conservative guy, but I’m going to push you to put the moderate conservative guy over here and everybody wins. They played politics with judges and it’s like kids trading a Pokemon cards. That’s what they’re doing with our judicial system. Everything about our judiciary in the United States today is an absolute joke except for the fact that the only people laughing or the corporations who are benefiting from this judge packing happening from the Senate.