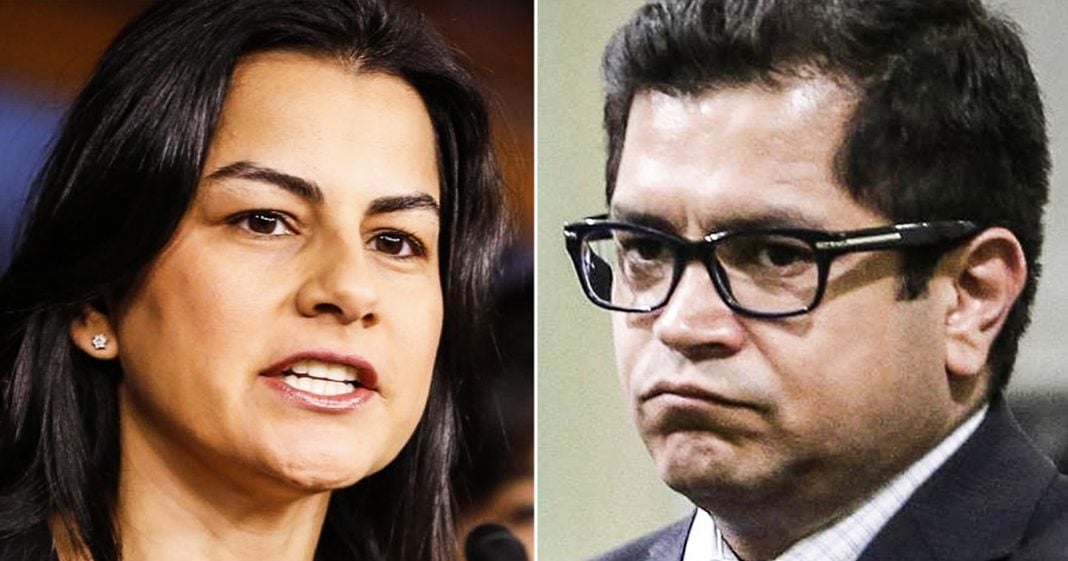 Two Democratic members of the US House of Representatives were caged alongside several other activists and asylum seekers earlier this week after they attempted to visit border detention facilities and aide asylum seekers. This move shows that the agents at the border aren’t even checking to see who they are caging, but what these two lawmakers witnessed gives us a clearer picture of what’s actually happening in this country. Ring of Fire’s Farron Cousins discusses this.

On Monday of this week to democratic members of the US House of Representatives were caged up and a port of entry along with 15 asylum seekers and several other activists from the group families belong together. Now, this was not necessarily because they were all just rounded up and thrown into a cage because they happened to all look Hispanic. Uh, the group actually planned to stay with the asylum seekers and essentially get themselves put into this detention facility. Uh, the two representatives, we had a Nanette Barragan and Jimmy Gomez who both represent the greater Los Angeles area. And while they were caged overnight with these asylum seekers who actually included the woman and her five children who were photographed being tear gassed not that long ago, they were able to tweet out a lot of the experience to let people know exactly what was happening to them. And what happens to migrant families who come here seeking asylum.

They mentioned, uh, one of the most startling things was that the cage they were put in was actually not a cage that they were put into, but instead a cage that was built constructed very quickly around them, they were all kind of huddled in together where the agents made them go, and then they pulled out this makeshift cage, built it around them, and that was it. They also said that the agents repeatedly, we’re making snide comments being exceptionally rude, mocking them. Uh, obviously not knowing that two of the people sitting in that cage happen to be members of the House of Representatives, but the big thing here was that they wanted firsthand experience, firsthand knowledge. They wanted to see what was happening. They wanted to see who was doing it, and they did a really great job of pulling that off along with the people from families belong together.

The, the information that they gave. And you can find more in the link in the description of this video is incredibly valuable. We know a little bit more about how horrible these agents are to the people that they’re locking in cages, or if you can’t lock them in a cage, we’ll just build a cage around you. Furthermore, and this is kind of the underlying heart of the matter here, seeking asylum is not illegal. In fact, even after the Trump administration tried to make it illegal, a judge came through this week and said, no, you can’t do that. I’m striking this down. So even though they haven’t broken any laws, were still locking them in cages, locking them away, taking too long to process them or talk to them or even get their stories or hell. I guess in the case of several representatives and other activists from the US even asking for identification.

I mean honestly, there’s no reason why these two lawmakers should have even been allowed to be locked up. Had anyone of those agents done job said, do you have any idea anything you know that I could look at maybe to make sure you’re not a US citizen or God forbid, even a US representative, they don’t care. They just want to round up as many non American looking people as possible and throw them into cages. They’ll deal with the details later and that is exactly what we learned from these two lawmakers when they spent the night and one of Donald Trump’s border asylum seeker cages.