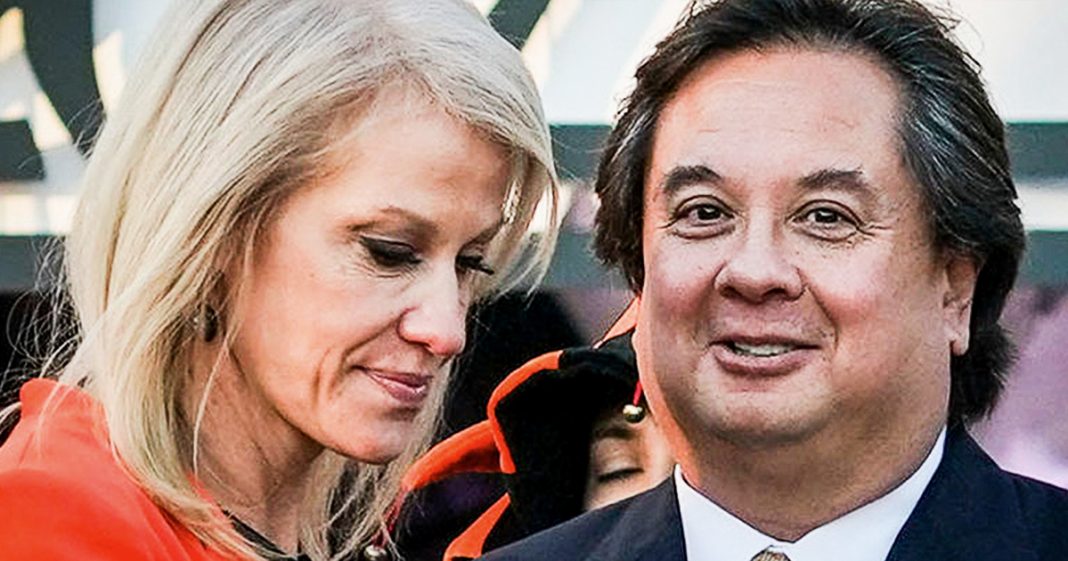 According to George Conway, the husband of White House counselor Kellyanne Conway, Republicans in DC have basically reached a tipping point and the writing is on the wall that shows that they are prepared to turn on the President in the very near future. There could be some truth to this, but it isn’t going to play out like Conway is predicting. Ring of Fire’s Farron Cousins explains.

George Conway, the husband of White House advisor slash counselor, Kellyanne Conway, believes that Republicans in DC are ready to turn on Donald Trump in an early morning tweet, George Conway said the following, the extent to which Republicans are distancing themselves from the White House as a poor sign for future, for a future where even more of the administration is under investigation, the signs of a collapse. Or here the question is what pushes everything over the brink. I disagree with George Conway to an extent on this. Um, I do not think right now that there is any kind of collapse with the support of Republicans in DC for Donald Trump. They have been loyal little servants. They’re good little workers. They will do whatever he wants. They’ve been doing whatever he wants. So I don’t see that collapse. If it is happening behind the scenes, that’s something Conway may know that I do not, but on the surface there does not appear to really be any collapse of Republican DC support for Donald Trump.

But I do think he’s right in the what’s going to push it over the brink because there is a breaking point and I do believe we are getting very close to it. And here’s what it’s going to be. When the Democrats, you know, officially take over the house at the beginning of January, Donald Trump is going to realize that he can’t get anything done at all, nothing. The Democrats will not let it happen. Republicans will either be forced to negotiate and move to the democratic side in order to get things done, or they’re going to have to try to play hardball, which likely they will lose with the Democrats. And that’s when Trump’s going to go off on him. Trump’s not going to sit there all day and always blame the Democrats. They’ll get most of the blame, but he’s also going to start taking pot shots at some of these Republicans.

He’s going to go after Mitch Mcconnell, who has been his most faithful servant. He may have to go after Lindsey Graham or rand Paul, the people that he’s praising on Twitter each day, that’s going to be the final Straw when he starts blaming them because he starts getting frustrated or when the Muller investigation or the New York investigation or the other New York investigation or any of the other investigations start closing in, he’s going to become more frantic and start lashing out even more at the Republicans for not doing anything to stop it. The brink is there and I think Republicans are rapidly getting pushed towards it, but I don’t see that collapse happening until they start eating one another. Trump will be the catalyst for that. Uh, he’s going to go after them when he gets so frustrated that he can’t go on anymore. And that’s what’s going to cause the republican support to erode. And again, Conway has a lot more connections to insiders in DC than I do. I mean, I have zero and I’m assuming he’s got at least two or three, so he probably knows a little bit more about what’s happening behind the scenes, but at least on the surface, we’re not seeing any collapse at the moment. But that doesn’t mean that it’s not on the way.