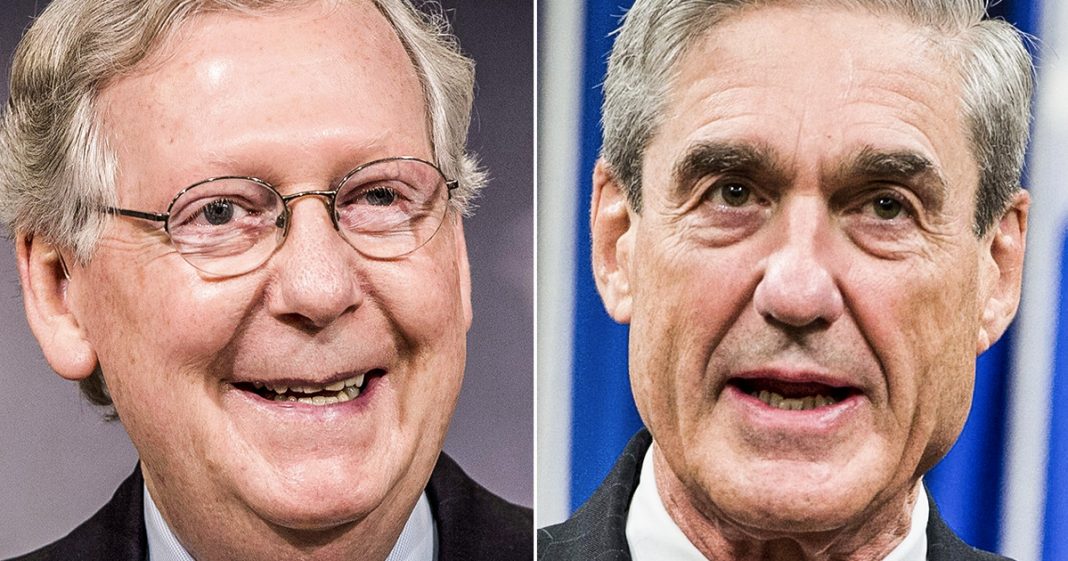 Mitch McConnell has, for the third time this year, blocked a bipartisan effort in the Senate to pass legislation that would prevent Donald Trump from being able to fire special prosecutor Robert Mueller. McConnell continues to claim that this legislation isn’t necessary, but all of the available evidence points to the opposite. Ring of Fire’s Farron Cousins explains what’s happening.

For the third time this year, Mitch McConnell has once again, effectively killed a bipartisan effort that would have produced legislation to protect Robert Mueller from being able to be fired by Donald Trump. The legislative effort was led by Jeff Flake, Republican, and then Chris Coons and Cory Booker, both Democrats, but the legislation was simple. It’s so we’re going to lay out a plan that Mueller can be fired, you know, with reason, you know there has to be a good reason. He asked to have done something wrong and it has to be done by a senior member of the US Department of Justice, not the president of the United States. Pretty simple past the committee, no problem there. And then Mitch McConnell, as he’s done the last several times, refused to bring it to a voice vote, effectively killing it because if McConnell doesn’t say, we can do this, then we can’t do this. McConnell maintains that there is no reason to pass this legislation.

He says that we’re trying to create a solution that’s in search of a problem because the problem is not their whole. Mitch, I want to know what this man has on you because you are absolutely delusional if you don’t think there’s a good reason to protect Robert Mueller. Donald Trump has fired the head of the FBI since taking office. He is fired. His attorney general and all of that was done because he doesn’t want people looking over his shoulder. He doesn’t want anybody investigating him. That’s what the Comey firing was about. He fired sessions because he’s mad that sessions wouldn’t fire Mueller and he is inching closer and closer towards that. In fact, replace sessions with a guy who actually laid the foundation on how to fire Mueller and you are dumb enough or naive enough to think that we don’t need legislation to protect this man.

I mean, here’s the thing, your, your, your guy. Trump keeps telling us that he didn’t do anything wrong. That Mueller is not going to find anything. No collusion. It’s a witch hunt. So shouldn’t we just let the witch hunt finish and then exonerate this guy? Right? I mean, that would make sense, but obviously it’s not a witch hunt. It’s not going to exonerate Donald Trump. That’s why he freaks out about it on twitter every single day, but his job needs to be protected because it’s not just about taking down Trump. Maybe this whole report will exonerate him. Maybe he has weeded out the criminals that were in the administration and everybody else has a squeaky clean record. That’s a possibility. I’ll be at a very small one, but it’s still a possibility. But what’s at stake here is the rule of law in the United States. This man was given a job to do to find criminals and that is exactly what he’s been doing since day one.

It’s been a highly profitable investigation, pulling in almost $20,000,000 more than it has cost. So all in all, it’s been a net positive for the United States. But if you refuse to protect this man, Donald Trump is sure as hell going to find any way he can to get rid of him. And then what’s going to happen to you, Mitch, because this is all on your shoulders. Now, you may not have wanted to, but you did take the lead on this entire effort. So if Mueller gets fired, it is 100 percent on you, and if Mueller comes out and says that, oh, here’s all the horrible things Trump has done, let’s go ahead and start impeachment right now. That’s also on you because you were the guy who thought it would be okay if the president fired in. There’s no good outcome for you on this issue, Mitch. You screwed the pooch too many times and you did it for a third time this week. So good, bad or ugly, this is going to end very badly for you.