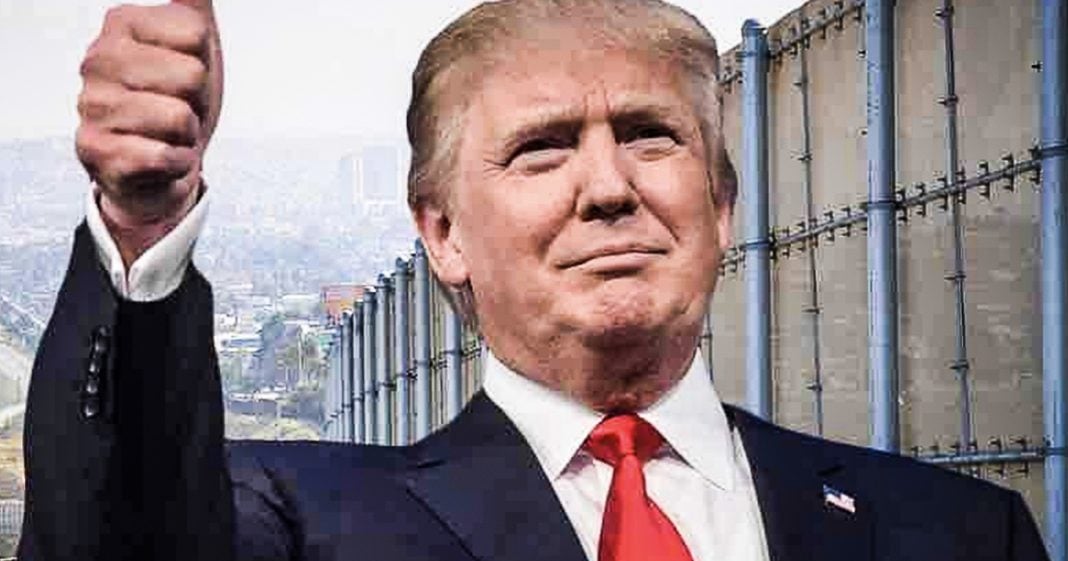 After musing about it on Fox News earlier this week, crazed conservatives decided to take the matter of funding Trump’s border wall into their own hands and they have officially started a GoFundMe to raise money. They’ve managed to raise over 3 million dollars so far, but that’s well short of their $1 billion goal. Ring of Fire’s Farron Cousins explains why this idea is so idiotic as well as what it says about Trump’s supporters.

You know, you’ve got to hand it to conservatives when they want to do something. They really get to work and start doing it. Case in point earlier this week, I think just two days ago on Fox News, they started musing about whether or not we could start some kind of crowd funding to pay for Donald Trump’s ridiculous border wall and here we are two days later and they’ve started a go fund. Me, a man by the name of Brian Coalface started a go fund me to pay for Donald Trump’s border wall. So far as of right this second, they have raised three point $6,000,000. You know, that’s not bad for 24 hours. Three and a half million dollars out of their goal of 1 billion, but don’t worry because coalface says that he is talking with the people that go fund me or trying to talk to them to raise the limit from 1 billion to 5 billion because that’s what Trump wants for his wall and that is what Brian Kolfage is going to give him.

What’s really depressing is that there are obviously tens of thousands of Republicans in this country who have no problem sending their money to what is very likely a charlatan, who has no intent of ever spending the money on this wall. Honest to God, like I’m really depressed. I didn’t think of this because I would love to have three point $6 million sitting in a bank account right now from idiot Trump conservatives. But nonetheless, uh, this guy, Brian Kolfage is still out there saying like, I know I’m trying to come up with a point person in the Trump administration to figure out how to make this payment. Uh, when it’s time and don’t you totally trust me. I’m not trying to scam anybody at all. Never. No, that’s not who I am. A. Now listen a little bit of sympathy for this guy. He is a US veteran.

He’s lost three limbs in active duty service and we appreciate his service. However, he is going about this 100 percent the wrong way. Donald Trump does not need any money for his border wall because that is not going to solve any problem that this country is currently facing. You want to help out the United States. You want to be a patriot. Then how about you donate that money to people who can’t pay their medical bills? How about you use some of that three point 6 million to pay down the one point $5,000,000,000,000 in student loan debt that people across this country are currently holding. How about you take that money and you go start repairing pot holes or some of our other crumbling infrastructure? How about you use that to go pay the heating bills for elderly citizens up north before more of them freeze to death this winter there is a million wonderful things you can do with this money and however much you end up raising, but building Donald Trump’s idiotic border wall isn’t one of them. This country has a lot of problems, a lot of problems that need to be addressed in a lot of problems that need funding, and here we are wasting time and money and effort to raise money for a project that no rational person in this country actually believes will ever get made.