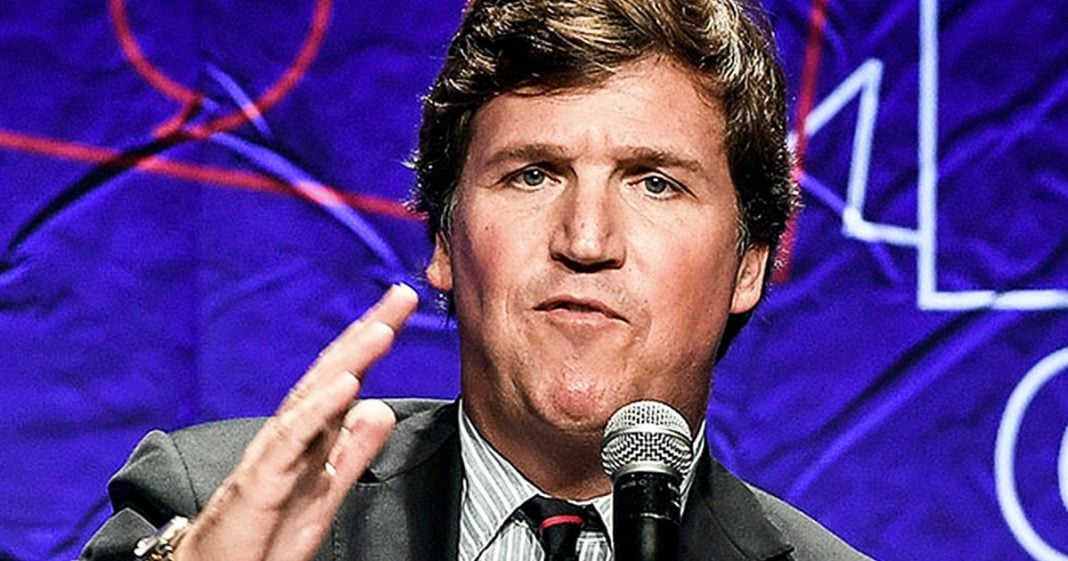 Tucker Carlson is hellbent on losing every advertiser that he has remaining, and he’s doing it as fast as he can. Rather than apologizing for his hateful comments last week, Carlson has now tripled down on them, causing more than 20 advertisers to say goodbye to his program. But that’s only half the story – the other part is the odd support for Tucker coming from mainstream media and even some on the left. Ring of Fire’s Farron Cousins discusses this.

Tucker carlson has decided that rather than apologizing for his hateful remarks about immigrants coming into the United States and making it dirtier and poorer and more divided, that he is just going to continue to double down, triple down, quadruple down on them, whatever he has to do on his program. Last night, he said that he is not going to be intimidated by these people calling for advertisers to boycott his show and he’s not going to change. He’s going to keep doing what he always does, which is being a vial hate filled a a liar. That’s what Tucker Carlson is and that’s what he does best. So rather than coming out and apologizing, tucking tail and understand that the network’s losing money on him at this point, he’s just going to keep on going. At this point, he is now last at least 20 advertisers for a show, and here’s the list.

Sandisk, Pfizer, Takita Pharmaceuticals, CareerBuilder, TD Ameritrade, Scotty vest, united explorer, just for men voices, any optical IHOC, Jaguar Pacific life, indeed bowflex smile, direct club, nerdwallet, minted into ancestry and Soda Stream. That’s a lot of advertisers and there’s some big names in there with big advertising dollars, but Tucker Carlson, rather than admit he was wrong, rather than apologizing to millions upon millions of people on this planet, instead wants to say, I’m not going to be intimidated and I’m not going to change. I’m going to keep doing what I do. Wow, that’s, that’s gutsy. I’ll give you that. Uh, but this isn’t about that. What this is actually about are the people out there trying to defend Tucker in shaming those who are allegedly trying to deep platform him. Nate silver happens to be the biggest culprit here. Came out yesterday, uh, with a lot of tweets on it, trying to defend it, warning us that, oh my God, you do this to Tucker.

It’s going to get done to the rest of us. Ah, we have to stop. Literally has never happened. Uh, throughout all of these boycotts. Whenever conservatives go on there and say something insanely racist up, it’s never been like, retaliated against. Right? I mean, we do have a few instances. Obviously, you know, Sam Sedar was the victim of this. They go back, they try to find an old tweet, take it out of context and and, and have something bad happen to you. James Gunn with guardians of the galaxy is another example, but in terms of d platforming, you know, really getting out there and starving the left of money. That hasn’t necessarily happened. But here’s the thing. There is nothing wrong with calling for an advertising boycott of Tucker Carlson. I support that 100 percent. I haven’t seen anybody out there saying we have to get Tucker Carlson off the air.

I’m sure they exist and I’m sure they existed long before these racist comments and they’re going to continue to exist until Tucker Carlson is no longer the host of a show because people don’t like him because he spreads hate and division and encourages his followers to go out there and spread that same hate and division in their daily lives. It is dangerous. His words do have consequences and that’s what I don’t understand why people like Nate Silver can’t see that. What’s wrong with us saying, hey Pfizer, you shouldn’t advertise on them. And Pfizer looking at what he’s saying. Finally and saying, Oh crap, you’re right, I shouldn’t. That’s not d platforming. That’s actually the free market at work. I don’t understand this defensive Carlson. It doesn’t make any sense whatsoever if he goes out there and makes racist comments and suddenly corporations, thanks to the activists realized that he said these things, they have every right to come out and say, I don’t want my brand associated with that.

I don’t want to be a part of this. I don’t want him to say that immigrants are dirty and then cut to a commercial for my company that makes me look bad. They have every right to do it and that is what is happening here. Me Personally, I mentioned the other day, the Tucker Carlson’s in no danger of losing his job and he’s still not in danger of losing his job. He is going to remain on that platform and hell, even if he doesn’t, he still has a. was it the daily caller? I think his, his, uh, there’s a lot of the daily conservatives because they’re not very creative with names, but whatever. So he’s going to be fine. He’s not losing any platform. He’s going to be just fine. So can we please stop trying to say that advertiser boycotts don’t work or that they’re going to backfire on us because so far hasn’t actually happened. All we’ve done is helped to quiet down some of the racism coming from these idiots on Fox.