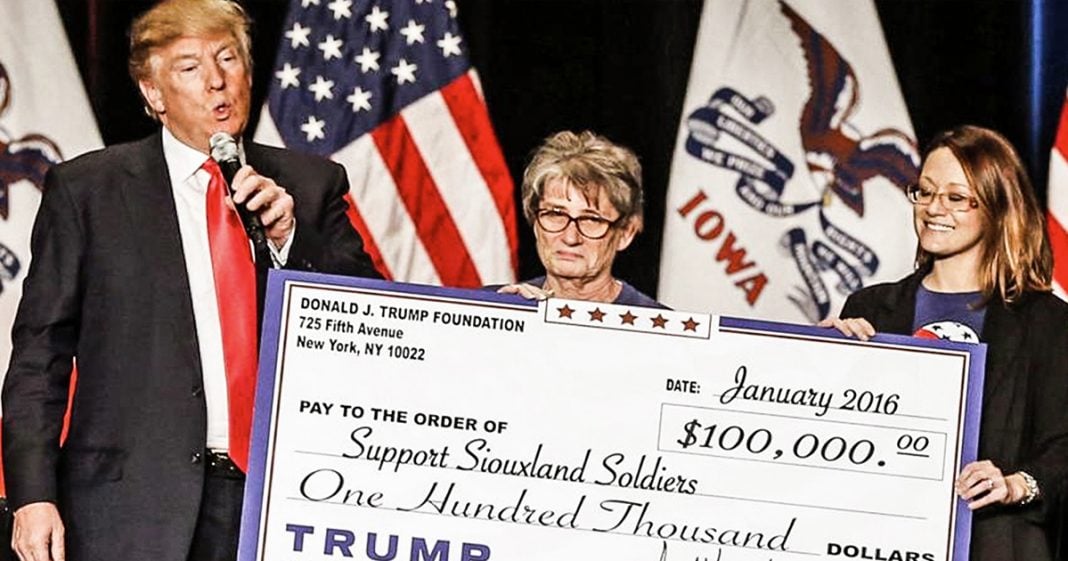 As part of an ongoing investigation and lawsuit, the Trump Foundation has agreed to dissolve in light of the evidence that the Foundation acted as little more than a personal piggy bank for the Trump family. This will not end the investigations or the lawsuits, and it certainly doesn’t bode well for the President and his family. Ring of Fire’s Farron Cousins discusses this.

Yesterday, lawyers for the Donald J. Trump foundation and New York Attorney General Barbara Underwood signed documents that would officially dissolve erase from existence. The Trump Foundation. Now these documents to dissolve this corporation resulted from the lawsuit and ongoing investigations into The Trump Foundation, which basically allege that the entire Trump family, Don Jr, Eric and Ivanka, were using this charitable foundation as their own personal piggy bank. They used it to pay off lawsuits. They used it to make repairs down in Mara Lago and they used it to a Donald Trump’s presidential campaign. Any one of those expenditures would have been illegal in a misuse of charitable funds, but they did all of those and more, and that’s actually what sparked this entire investigation. Now the disillusion of the foundation still has to be approved by a judge. A. Previously, the judge had denied the foundation’s requests to go ahead and dissolve because the investigation was still ongoing, but now the attorney general believes that they have enough information, enough evidence to where the foundation could go ahead and dissolve and it would not interfere with the ongoing a lawsuit with the current investigation.

With anything else happening, they have what they need basically, and that’s the biggest takeaway from this, not just that the foundation is dissolving. It’s that other point, and it’s the other point that I don’t see enough people talking about right now. They wouldn’t let them dissolve because they didn’t have enough info from them yet. They didn’t have all the guns, but now they’re saying, you know what? I think we’re in a good place. You can go ahead and dissolve like you claim you’ve wanted to. Since 2016 when Trump was elected. That’s actually what their lawyer tried to say. To downplay all this, to make it seem like, well, we’ve been trying to do this for two years. I’m finally good that you know, is off my shoulder. No, they didn’t want to dissolve it because they could have. Because investigations had not necessarily begun in depth yet and at the time since they hadn’t been charged with anything, they 100 percent could have dissolved.

They chose not to and now they’re gonna have to do it through the courts. So by signing this paperwork by the New York AG’s office agreeing to this, this means they have a lot more information than most of us realize, and it also means that we’re inching one step closer to the conclusion of this particular lawsuit, not the investigation, because as everybody remembers, Underwood had referred this for criminal investigation and possible after that criminal prosecution, which given the facts of this case is very likely to happen. It would almost be impossible for any investigator, any prosecutor, look at this from a criminal standpoint and not determined that the Trump family, every one of them involved committed criminal activity. I mean they use this, we, the documents are there, the signatures are on those documents. They use this to pay off lawsuits, to pay settlements to fix up Mara A Lago.

And again, most importantly, you get the double whammy of criminal activity using these charitable funds to boost Donald Trump’s campaign. The campaign work in coordination with the foundation to give large sums of money to groups that Donald Trump was about to go and speak with a particularly. One of the ones that we know about from emails late was a $100,000 donation to a veteran’s group right before Donald Trump was scheduled to go and speak to them in the 2016 campaign. The criminal activity here is is blatant. It is obvious and it shows that there is a pattern of behavior because this even began long before he ran for president of Donald Trump committing criminal activity along with his children. That doesn’t bode well for any of the other investigations either, and that’s another part that people aren’t necessarily talking about. How’s that going to look when he has to defend himself against Muller and insists that I knew nothing?

I am a good guy. I don’t ever break the law when we’ve got this group up in New York saying, Hey, look at these documents. You 100 percent broke the law here, so why would we think you’re not doing it there? Why would we think you’re not doing it over here? Why would we think it hasn’t happened in the past as well. This case is huge, and this document signing yesterday to dissolve The Trump Foundation is, in my opinion, one of the biggest pillars to fall off of Donald Trump’s higher than thou platform in a very long time, and certainly it’s not going to be the last.