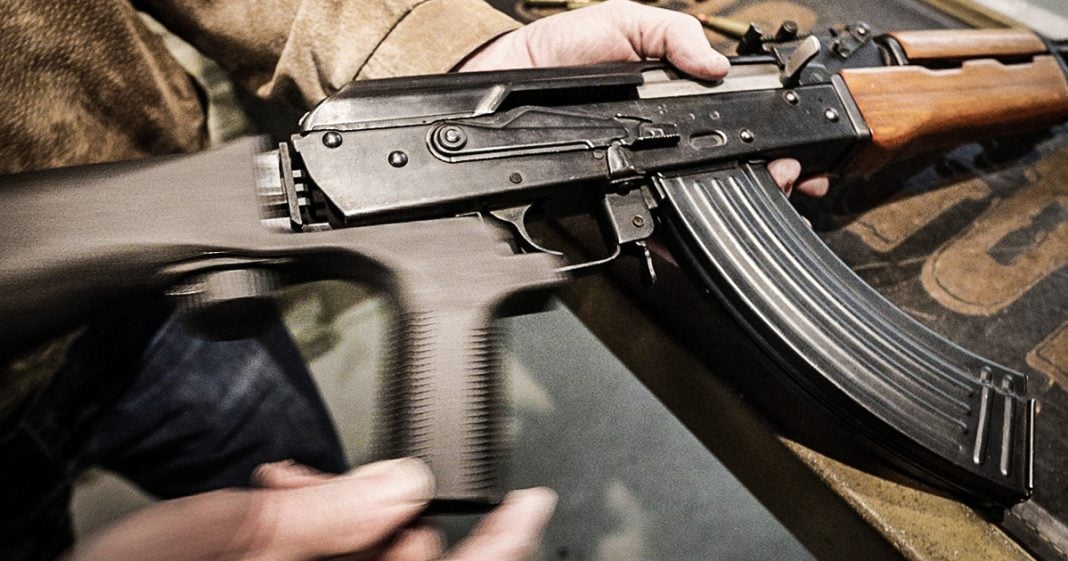 Donald Trump has actually done something good for the United States – he and his administration have now banned “bump stocks” that are used to turn semi-automatic rifles into rapid-fire pseudo machine guns. These bump stocks are what allowed the Las Vegas shooter to fire so many rounds in such a short amount of time, and the elimination of these items could actually save lives. Ring of Fire’s Farron Cousins discusses this.

You know, it’s not often that this actually has to happen. In fact, I don’t know that it’s really ever happened maybe once, but it’s about to happen again maybe for the second, possibly for the first time, and that is praising Donald Trump for doing something good and that good thing that he did was yesterday on Tuesday, this administration finalized a rule that will ban bump stocks in the United States. Now, if you’re not familiar with what a bump stock is, let me read you the description of these things from the 157 page finalized rule from the US Department of Justice. These devices convert and otherwise semiautomatic firearm into a machine gun by functioning as a self acting or self regulating mechanism that harnesses the recoil energy of the semiautomatic firearm in a manner that allows the trigger to reset and continue firing without additional physical manipulation by the trigger or of the trigger by the shooter.

So basically it already takes a high powered rifle. It makes it even more high powered. You can get off more shots a lot faster. This is what the Las Vegas shooter used so that he could kill as many people as quickly as possible injure hundreds because of bump stocks and the Trump administration did yesterday what the Obama Administration chose not to do and technically what the Trump administration chose not to do a not that long ago because the atf had already said that because of the way these bump stocks work, you know, you still have to have pressure from the the shooter, so it’s not technically a machine gun, so it doesn’t fall under the ban on machine guns that we have in the United States. The ATF said that under Obama it’s. Obama said, okay, I’m cool with that. Let’s leave them out there, and they said it during the Trump administration and at the time Trump said, okay, fine.

Yeah, whatever. We won’t touch them, but now in 90 days this rule goes into effect and people are going to be required to either surrender their bump stocks or they’re going to have to go out there, law enforcement officers and take them away. Now we can expect a lot of legal challenges to this. However, considering the fact that a bump stock itself is not a firearm, it would not, depending on how good your lawyer is at arguing, it should not fall under protection of the Second Amendment, the right to bear arms. This is an attachment. This is an accessory that’s like saying, we want to ban a holster. A holster is not a gun. Holster is not a firearm. A holster is not an arm. You could do that just like you could with a bump stock because it does not infringe upon anyone’s second amendment rights.

You could still buy a firearm. You just can’t turn it into something that is technically illegal here in the United States. Now, the biggest question here is, what is Donald Trump’s motivation? Why is he doing this? After all, as I previously mentioned, they already decided earlier in his administration not to do it, but now suddenly they’re doing it and I hate to try to pick apart a good thing this guy actually does, but it does raise some questions. Is it because he’s trying to distance himself from the NRA after all their troubles with getting all that money from foreign countries who aren’t exactly friendly with the United States? That’s my first guess because the NRA doesn’t want these band. The NRA wants nothing related to firearms band, so if Trump makes this stand, goes against the NRA, it gives him a little bit of wiggle room to say like, yeah, they do some shady things and I mean, look at the good things I did. Obviously we’re not in cahoots. We’re not on the same page. That’s what I think is happening here and hopefully it doesn’t fool anybody, but regardless of the motivation, you have to give credit where credit is due. So on this one single issue, you did a pretty good job.