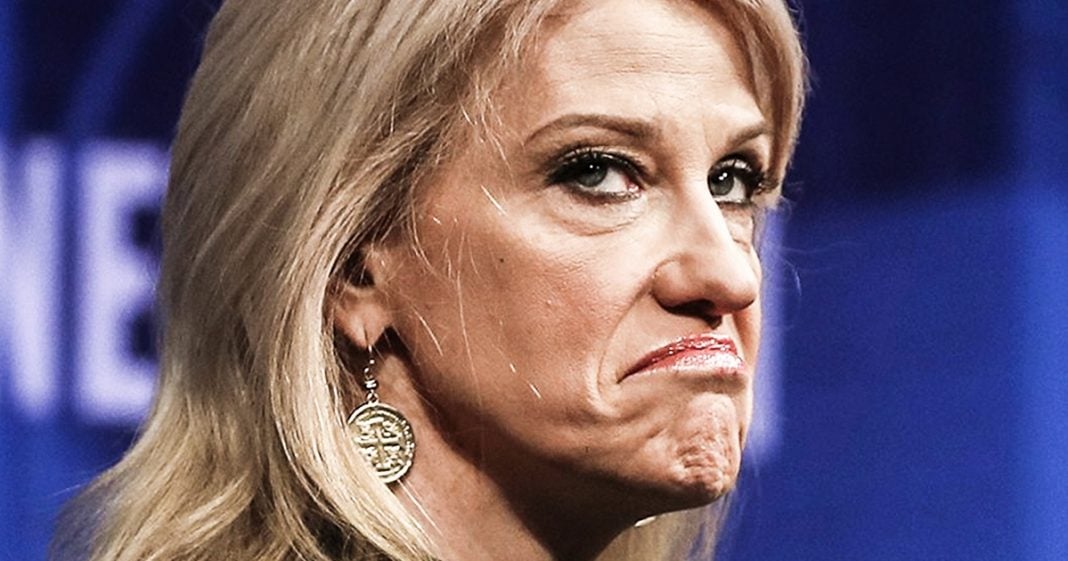 Washington Post columnist Margaret Sullivan has a new op-ed out where she makes the case for media outlets to immediately stop giving White House counselor Kellyanne Conway a platform to spread her lies and hatred. The arguments are sound, and the reasoning is spot on, but media outlets love bringing on Conway because they know it’ll attract eyeballs, which means more advertising dollars. Ring of Fire’s Farron Cousins discusses this.

In an op-ed this week for the Washington Post, their media columnists, Margaret Sullivan called on all media outlets throughout the United States to ban Kellyanne Conway, and I have to be 100 percent honest. This is a band a boycott that I would absolutely without a doubt get behind Margaret Sullivan makes a phenomenal case as to why Kellyanne Conway and all of Donald Trump’s statements should be removed from our news broadcasts immediately. And it’s simple. Kellyanne Conway cannot tell the truth. She goes on there regardless of what program it is, spouts the administration’s lies and horrendous talking points, and sometimes the host do bother to refute her or correct her, but that just makes her argue even more. Nobody gets a point across. She has nothing of substance to say, so what’s the point? Why bother with her? Why give her that megaphone? It’s what Sullivan says. Why give her that megaphone. And furthermore, Sullivan goes on to talk about the fact that there are too many media outlets in this country that just report what the president says without bothering to say one, that it’s an absolute lie or to offering the truth.

Instead just saying, the president said this, this is what he said. We know it’s not true, but we’re not going to bother to put that in the article. The media, in spite of what Donald Trump has says, has given him every opportunity to lie to the public, to mislead the public and tell us things that are basically his version of an alternate reality. And it all comes back to Kellyanne Conway is Sullivan says she is the lead spokesperson as the White House counselor out there spreading this misinformation. But there is a reason that media outlets continue to put her on. And it’s because of the eyeballs. Whenever you see immediately tweet out that, hey, Kellyanne Conway is going to be coming on our show in an hour. You can bet people are gonna. Tune in not just the people who support her, but the people who want to see her make a fool of herself trying to defend the Trump administration.

It does go both ways. There’s a lot of people that enjoy watching Kellyanne Conway go down in flames and I’m not too proud to admit that I am one of those people. It’s funny, but as Sullivan points out, it really does real damage to this country by letting her go out there, by giving her the megaphone. You’re letting her message of hate and alternative facts permeate the minds of too many people in this country. It poisons the political discourse, and in that regard, again, I agree 100 percent with Sullivan’s analysis and it’s beyond past time for Kellyanne Conway to stop appearing on our television, and once that stops, that frees up the rest of us to no longer have to talk about her ever again.