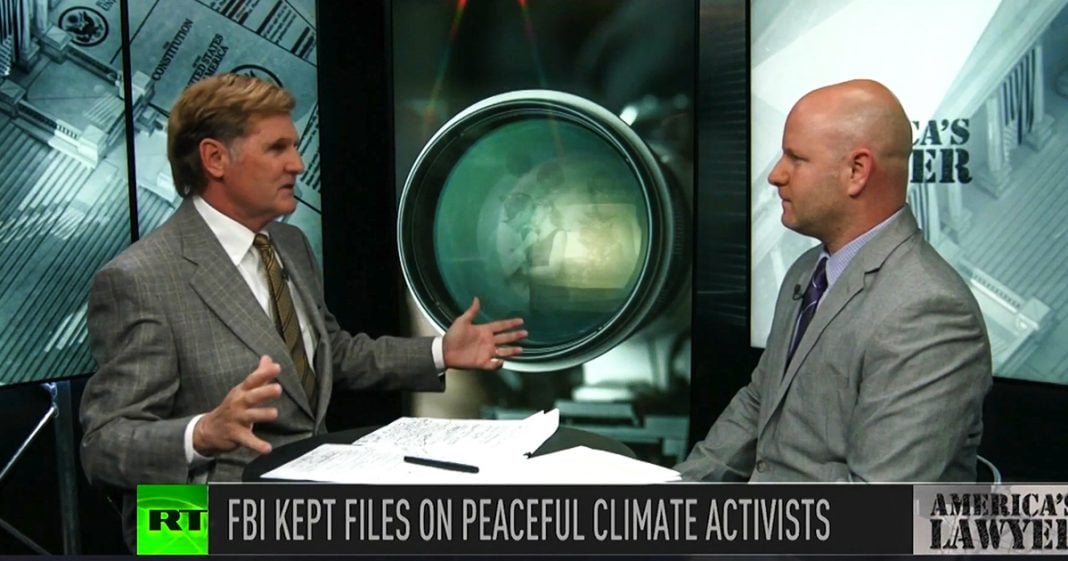 Via America’s Lawyer: Mike Papantonio and Trial Magazine Executive Editor Farron Cousins, discuss how the FBI and other intelligence agencies believe that activists are terrorists in this country by secretly tracking and spying on them.

Mike Papantonio: US intelligence agencies for decades have been spying on ordinary citizens in an attempt to control civil unrest. We learned many years ago through the Frank Church hearings that government agencies like the FBI and the NSA and the CIA had been tracking and spying on American citizens without any warrants just because they believed those people posed a threat to the powerful elite in DC and to corporate America. The domestic spying programs continue to this day and the latest targets are the environmental activists who actually want to keep the planet from burning up for the next generation.

Joining me to talk about this story and as well as other top legal news is Farron Cousins. He’s the executive editor of the Trial Lawyer Magazine. This is like a blast from the past. This story is, there’s really no surprises here. We’ve all suspected it. You know, we’ve all known that they’re using social media to learn everything they can about it.

But this report, when I look at this coming out of the FBI’s own files, this looks like a real, just exactly what the Frank Church hearings were supposed to stop. What is your take on this story?

Farron Cousins: Well you know, I think a lot of people actually thought, you know, after the Church hearings, you know, at least back in the day that, okay, well they’ve exposed this, this ended, and then we knew during the Bush administration, oh, domestic spying, it’s back suddenly. Truth is, it never went away. It didn’t go away under Bush, it didn’t go away under Obama and it continues to this day. And in fact, what we found out from the Guardian is that a lot of this with the environmental activists being spied on, happened while Obama was president, the FBI decided to classify some of these people from these break free from fossil fuel events that took place over six continents.

Some of them up in Iowa, they thought maybe some of these folks are terrorists. So we’re using that to justify spying on them, violating civil liberties left and right, because we want to make sure we know what these environmentalists are doing and what kind of profits they’re threatening. That’s what’s really…

Mike Papantonio: Those darn people in Iowa, you know, there’s such troublemakers. So it, okay, so the FBI had, they’ve denied this for time after time and now we find it, it’s in their own file cabinet. This is documents right out of their own file cabinets. Should they be embarrassed? Well, no, they’re really not embarrassed. They really don’t care because the secret’s out. It’s been going on for an awful long time. But you talked about the Frank Church hearings and I think it’s extremely important. The Frank Church hearings took place in 1975 and they took place because they found out that the FBI and the NSA had been spying at just without any controls on American citizens.

They were reading their, any type of a messaging that took place. They were reading any, listening to telephone conversations. They were spying, but there’s people they were spying on were Martin Luther King, Mohammed Ali, Seymour Hersh. Of course, one of the most famous journalist of his time. Why were they doing that with Seymour Hersh? Seymour Hersh had uncovered the My Lai Massacre. He had done a story on that. He was very critical of Vietnam War. He had done a story that and several other stories.

The Allende murder that Henry Kissinger engineered, the little thug Henry Kissinger engineered the murder of Allende so Pinochet could be put in office. So Seymour Hersh covered that story. It wasn’t that they were just spying on him. They were actually intimidating him. They were following him around, the big black car parked outside his house, making his life miserable because that was the power of the NSA and the FBI. We thought we did something about it, didn’t we?

Mike Papantonio: Not so, right?

Farron Cousins: No, absolutely not and what we found out during the Church hearings was that this actually started in 1947. That’s when the government itself started spying on people in this country without a warrant. And then when Truman got popped for that, he said, okay, well I’m going to create this new agency, the NSA. We’re going to create these FISA courts. They’re going to kind of work in unison so we can get around this without a warrant issue, but we’re still doing the domestic spying. And then Bush came along, obviously said we’re going to do a work around so we don’t even have to go to FISA, you know, they were doing it on the anti-war activists and then, you know, it increased at the time to the environmental activists, which increased.

Mike Papantonio: Well, Martin Luther King, the whole civil rights. They were all under the eye and it wasn’t just the eye of the government. The government had done more than just, they were outwardly intimidating these people. They set, they set in motion the fact that Martin Luther King had an affair with several women to try to destroy his marriage. But that was the FBI at work and we know that story now. And we, and this Frank Church hearings, told us that story and it gave us an idea of how dangerous it is when we allow government to do these things without any kind of… You know, what I thought was interesting about this Farron is, you know, here you’ve got the FBI, they want to spy on environmental activists. They want to spy on things like Greenpeace and people who might be objecting to the fact that we’ve got environmental problems in this country.

We have racial issues, whatever. They want to spy on those people. At the same time, the FBI allows HSBC to fund terrorism. Literally to fund terrorism and they don’t prosecute anybody with HSBC. This is after HSBC and other banks signed off and said, yes, we did this. Yes, we knew we were funding terrorism by washing the money. Washing money. Yes we knew American lives were endangered and Americans were killed, and oh, by the way, we’ll pay a billion dollars. Will you let us go? FBI did nothing about that. So the, Howard Zinn wrote about this a lot, as you know he’s a great writer, and what he used to, he used to equate the FBI and the NSA is to the modern Pinkertons. You know, that’s where corporations would hire these investigative thugs to break up unions and they would get involved, but it was paid for by the government.

I mean, they’re actually involved indirectly with the government. And it kinda gives you the ugly underbelly of Capitalism gone wrong. When government is so tied to corporations that they’re more tied to Exxon, they’re more tied to DuPont than they are protecting the citizens of this country. This is a deplorable story and I just think the more of these documents that come out, even though typically you don’t have corporate media really dealing with this, even though they say this is an important story, I can assure you it’s an important story and we’re going to see this story develop more and more. I really do believe that the more we get out of those file cabinets, the uglier this story is going to…

Farron Cousins: Well, let me just add to your point here, because when you bring up HSBC, they got fined. They admitted we washed money for terrorists. The reason the FBI didn’t want to spy on them or go after them is because when they get those fines, the DOJ, that becomes FBI fund money.

Farron Cousins: They get to go spend it.

Mike Papantonio: Nobody goes to jail. But we got to, you got to pay big money to stay out of jail.

Mike Papantonio: Can’t do that with average citizens.