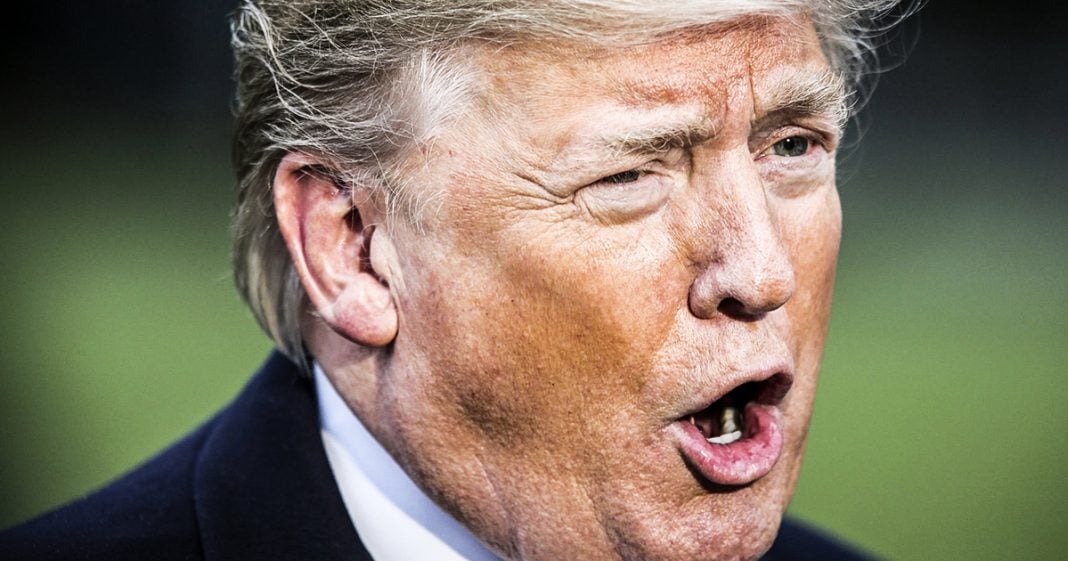 The first campaign ad of the 2020 presidential campaigns has arrived, and it certainly doesn’t disappoint. The ad for Trump’s 2020 reelection shows his new campaign manager, Brad Parscale, informing voters that they need to call Donald Trump via a special 800 number and thank him for doing such a good job. Ring of Fire’s Farron Cousins explains how Trump’s fragile ego led the campaign to the decision that sucking up is the best way to make Trump happy.

Well, ladies and Gentlemen, I guess the 2020 presidential campaign season is officially underway because the Donald Trump for 2020 campaign has officially released their first ad and yes, it is just as creepy and odd as you would expect. Here it is.

I’m Donald Trump and I approve this message. All right. Here’s the thing. They’re putting out this 800 number. It’s on TV, so any Wacko in this country can call that phone number and they’re going to have somebody that’s going to have to listen to these nut jobs. Calling in. And speaking of that, I happen to have the number queued up right here. So let’s go ahead and give it a call. Let’s see what this is all about. Let’s thank Donald Trump for something.

Hi, this is Farron Cousins from Ring of Fire. I’m not calling to thank the president. I am calling to express my deepest sympathies for whoever it is that’s going to have to go through and listen.

Please hold for a very important message from Brad Parscale, campaign manager, Donald J dot Trump for president. Hello, this is Brad Parscale. Thank you for supporting president Trump. I talked with the president every day and I need to let him know who is with president. Trump is keeping his promises to the American people. Our economy is booming. Thanks to lower regulations, massive tax cuts and renegotiated trade deals that put America first. Finally, the working class forgotten. Americans are winning. We are enforcing our immigration laws and make an American safer because America is stronger around the world. The president Trump is an ambitious daily attacks by the fake news media, far left Democrats who wants to implement the radical socialist agenda. It will stop at nothing to overturn the election or remove your President from office 2016 unique and millions of deplorables elected president Trump. Trump’s bring change to Washington and make America great again, but we need your help.

They say that word like it’s a badge of honor. We are deplorable. We’re fighting again, resonance from is reelected in 2020, but we cannot do it alone. We need help from Trump supporters like you. I need you to please press one now to make a contribution directed. Air It as election campaign. Again, please press one to support president Trump’s fight to make America most money for you to continue to. To continue. Let’s go here. I understand the contribution is a lot to ask. For me. It is president Trump is asking for your support now. Before it’s too late. We must protect the Trump presidency for the American people know their direct support test campaign is critical in this effort. You can even make a modest contribution. Please press one now. Press two. To continue.

I swear to God. If this is a third pitch, did say Gimme some damn money. I’m going to be furious.

Thank you. Instead of Donald J Trump.com. See how you can further help support president Trump. Thank you. Goodbye.

So there it is. This is not just a call and tell Trump how great he is. Narcissist project. This is in fact give us money. And if you don’t want to give us money, we’re going to double check with you towards the end of the call and say, are you sure, please? These horrible Liberal Democrats want to put socialism in here. Aren’t you a good deplorable? I mean, the idiot actually said that like me and you and millions of other deplorables, dude, it’s not a good thing to call yourself that you know, that’s not something you should be proud of because Trump has proven everyday that yeah, his followers truly are those deplorables. But nonetheless, ladies and gentlemen, that’s the ad. That’s what happens when you call that phone number. I have done it for you. So now, hopefully you don’t have to.