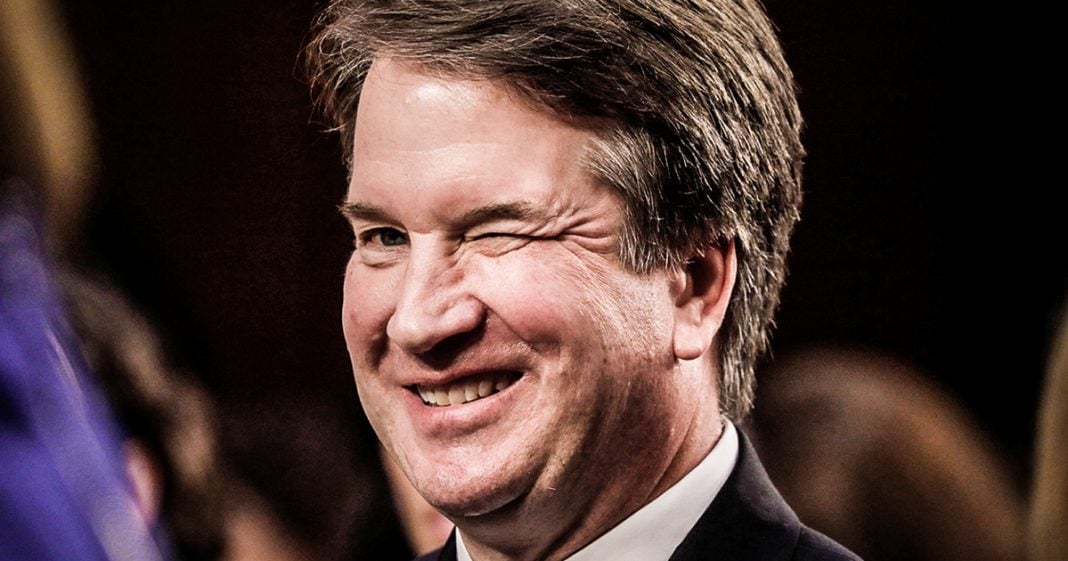 A panel from the 10th Circuit has finally issued their ruling about whether Brett Kavanaugh broke the law by lying during his initial testimonies to Congress back in 2004 and 2006. The panel decided that there’s nothing they can do about Kavanaugh’s alleged perjury because he’s no longer a Circuit judge and is therefore out of their jurisdiction. In essence, these judges are telling us that Brett Kavanaugh is above the law. Ring of Fire’s Farron Cousins discusses this.

A panel of judges from the 10th circuit here in the United States issued a 10 page ruling yesterday where they essentially told us that newly appointed Supreme Court Justice Brett Kavanaugh is above the law. That is the essence of the ruling that these judges handed down. Now to take you back in time a few months. The reason these judges were looking into any potential criminal activity by Brett Kavanaugh is because during his confirmation hearings, uh, there were 83 complaints lodged against cabinet for lying during his testimony’s, not just the testimony in September, but also testimony that he gave in front of the Senate in 2004 and 2006 83 complaints. Those were sent to Supreme Court Justice John Roberts. Now, since Kevin Hall was being considered for a supreme court role, uh, and Roberts did not want to give the appearance of any bias. He sent these complaints to the 10th circuit to be investigated. Everybody at the time thought, hey, that’s going to be great.

Well, the 10th circuit came back and said, there is nothing we can do. We cannot hold him accountable for any of these things he has been accused of doing. They made it kind of clear in his ruling. They think he definitely did all these things, but unfortunately their hands are tied because of a 1980 rule that says the only people who can punish or hold supreme court justices accountable in any way are the people in Congress because capital is now currently no longer a district judge, federal judge, whatever it was, they have no authority over him in the 10th district had he not been confirmed to the supreme court, their investigation likely would’ve said yes. He broke the law. Yes. He lied to the Senate on three different times for three different years. So yeah, we’re going to get them off the bench. He’s done four, but instead, in spite of the criminal activity, because of the stupid law, Kavanaugh gets to stay on the Supreme Court, even though the evidence against him is over whelming.

And to me that’s one of the biggest problems of the all hearings. You know, it was good that they were bringing in the accusers and hearing from them and investigating that even though the investigation was a total sham by Republicans, but they should have all so spent just as much time on the fact that Kavanaugh clearly the evidence showed it lied to Congress in 2004 and 2006 and that should have immediately not only caused him to lose his nomination, but to lose his current seat on the court he was on, but we didn’t go that route. Senator Patrick Leahy tried to, didn’t work out because the sexual assault allegations came in and Democrats thought, hell yeah, we’ve got a slam dunk on. Those didn’t sway. A single Republican didn’t, and that sucks. It should have. That alone should have disqualified him, but that’s why you can’t ever put all your eggs in that one basket. Had We hammered him on the perjury, provided those documents that lay he has that showed Kavanaugh lied under oath to the Senate and then given the finishing move of all these accusers against him, we would still have a vacancy on the US Supreme Court today. But unfortunately, we botched the hearings. The FBI intentionally botched the investigations, and now the district court is telling us there is nothing we can do unless congress eventually has the numbers to impeach this jackass.