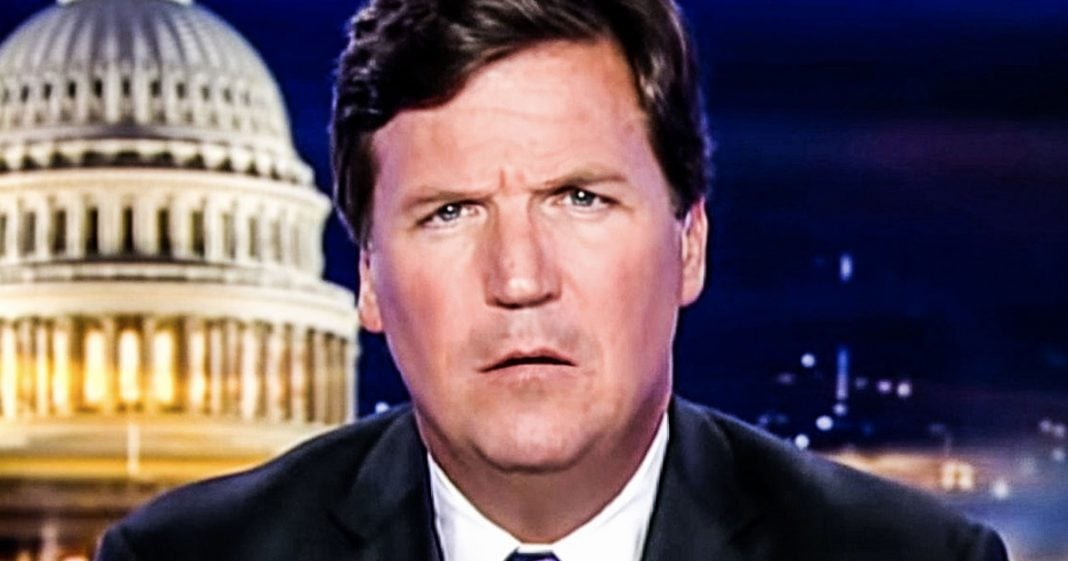 Tucker Carlson went on an angry tirade on Friday evening about immigrants, saying that they make American “poorer, dirtier, and more divided.” This incredibly racist statement has caused advertisers to flee his program, but now he’s begging them to stay by proclaiming that he actually loves immigrants and that he believes the caravan travelers all have good intentions. This is too little, too late, as Ring of Fire’s Farron Cousins explains.

This past Thursday evening, Tucker Carlson decided to go on yet a another racist tirade against immigrants saying that they make our country poor, dirtier and more divided. Now, immediately after he made those comments, people started flooding social media asking advertisers why they would support somebody as openly racist as Tucker Carlson. After he made those comments, the first advertiser to say we’ve had enough was pacific life. Then on Friday, Tucker Carlson tried to walk back some of his comments fearing a bigger advertiser backlash. So on Friday, Tucker once again talking about the caravan, because that’s all that man could seem to talk about. Uh, he said the following, he said, the reason we keep going back to this topic, and let me just stipulate as I have before with you, that I, I like immigration. I like immigrants. I give every person in the caravan the benefit of the doubt.

I think most really do want to come here for a better life. So poor Tucker Carlson has just been taken out of context this whole time. Folks. He loves immigrants. They’re all coming here with the best of intentions not to, as he says, make us poorer, dirtier, and more divided. I mean, you literally said that 24 hours ago. Now suddenly after you lose your first advertiser, you’re saying, I love immigrants. I wish more would come. Oh Gosh. They’re just so wonderful. Yeah. Nobody bought it. Especially your advertisers and you know what else? They didn’t buy more ad time on your program, so in spite of Tucker Carlson’s begging, because that’s exactly what that was. He made that statement to essentially begged more advertisers to not flee his program, but after that, in the last few days, a total of five advertisers have now dropped Tucker Carlson with more expected. In the coming days.

As I mentioned, you’ve got Pacific life. They were the first to drop. Then you had indeed smile, direct club minted and Bowflex. All five have now dropped Tucker Carlson’s program from their advertising rotation. Now, Tucker Carlson is probably not in any real danger here, but I do expect more advertisers to flee his show, but given the fact that he’s the second highest rated host on that network, I do not think anything is actually going to happen to him in terms of losing his job or whatever the network certainly could and should lose money from this, but Carlson’s going to keep plugging along saying these horribly racist things like he has for the last few months. I mean, if you’ve paid attention to Carlson Tucker Carlson for the last few months, his rhetoric and his tone about immigrants is getting more and more harsh. You know, he said that they’re coming over here to take over our culture, to change our culture.

You know, turn it into a non white culture. I mean, Tucker Carlson is 100 percent using white supremacists talking points in his program. Anyone who advertises on that program is basically saying, we’re cool with that. We’re okay with it. We like it. We embrace it and we’re going to attach our brand to it. But here’s the problem. It’s not just tucker. This happens all day on Fox News. It happens on Fox and friends. That happens on Sean Hannity and Ingraham and judge Jeanine, um, they all talk like this. They all act like this. So it’s not just tucker, anyone who advertises on Fox News for any program at all is basically saying we’re okay linking our brand, whatever it may be, to the talking points on Fox News. So my advice for every single advertiser out there that is currently running ads on any Fox News program, be careful because eventually you’re going to face public backlash. You’re going to get those messages on social media, why you support X, Y, or Z statements made by any given Fox host on any given day. And if you’re not prepared to answer those questions and let the people know that you’re totally cool with those statements, then I would suggest looking elsewhere to place your ads.