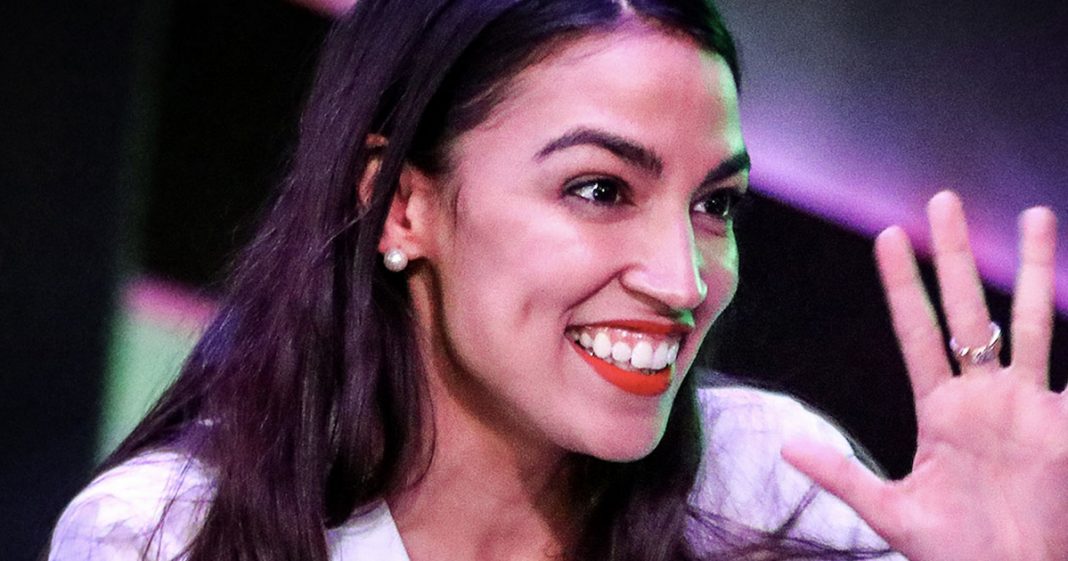 Representative-elect Alexandria Ocasio-Cortez is proving time and time again that you can win over even the most hardcore Republican voters by simply giving them policies that they like. And the Green New Deal that she is pushing on Capitol Hill has now attracted a majority of the country, including more than 60% of Republicans, who all believe that this is a great idea that needs to become a reality. The writing is on the wall – will the rest of Congress fall in line? Ring of Fire’s Farron Cousins discusses this.

A new poll came out this week from Yale that actually provides some really positive news for the United States and that positive news is that a majority of people in this country left right and center actually support the green new deal being pushed. Basically, she’s leading the charge Alexandria Ocasio-Cortez, they support it. Here’s the numbers and these honestly, these are. There’s a shocking 81% of total people in the country support the green new deal. That includes 92% of Democrats, 88% of independence and even 64% of Republicans, 64% of Republicans support this green new deal that Ocasio-Cortez is helping to spearhead in Washington DC. There’s a catch. There’s always a catch because 82% of people polled here said they actually hadn’t really heard anything about what the plan does. They have an abstract, you know, they know that it’s about making a greener economy, creating jobs, renewable energy, those kinds of things, but they don’t actually know what the proposals are.

That’s a problem at the moment, but not necessarily. Here’s what it does. Okay. A switching us electrical grid to 100% renewable energy by 2030, improving energy efficiency, setting up policies for a green jobs guarantee while planning a just transition for fossil fuel workers as they move into new economic sectors. It’s pretty simple. Plan, get off fossil fuel, retrain the fossil fuel industry workers to work in the renewable energy field, work on the energy grid, upgrade everything, work on energy efficiency for vehicles and homes and anything else that use any kind of fossil fuel at the moment. And we’re good to go. We help save the planet. We create more jobs. We create a greener economy. That’s what this thing does and people will understand that because after all, majorities of Republicans, Democrats and independents also support action to address climate change. So that is likely one of the reason why we’re seeing these poll numbers that also reflect that they may not know exactly what the deal is calling for, but they have a general idea and they support it.

So here’s the big question. Now the public wants it left, right? Center and everything in between. Democrats are starting to jump more and more on board with this, Ocasio-Cortez and everyone else who is pushing this as doing a tremendous job with it. So where’s the rest of the politicians, right? Where are they? Why are they not jumping on this? And the answer lies in fossil fuel donations. That’s the biggest problem. That is going to be the biggest hurdle to overcome to get this green new deal, to become a reality in the United States. As long fossil fuel companies continue to pump millions upon millions of dollars into our election process each year, there’s almost no overcoming it. I ain’t even Democrats. Some Democrats are on the Dole of these fossil fuel companies. You Got Joe Manchin in West Virginia. One of the worst Democrats in this country who is completely beholden to coal does not want to move to a renewable energy economy.

Manchin’s gotta go. We had the chance to do that this year. Unfortunately, it didn’t work out so well, so we got six more years of this idiot, but if the push continues, if the public pushes it because we can’t just rely on on a few members of Congress to go out there and push it and hope everything’s okay, we have to help. We have to join in the fight. We have to talk about it, we have to explain it and we have to let people know that this is the only way forward, both economically and environmentally because it is the majority of everyone, regardless of party affiliation, supports this plan. This could truly be the the thing, the catalysts that can unite us as a country in a time when we are so divided. It creates jobs. It creates a cleaner environment. It reduces pollution, which reduces illness and sickness and death. We could band together and stop this. Why? Because this is about policy, not politician personality and this is what happens when you run on policy. When you promote good policy, you can actually unite everyone to join in with you, and that is something that too many career politicians in Washington DC seem to have forgotten.