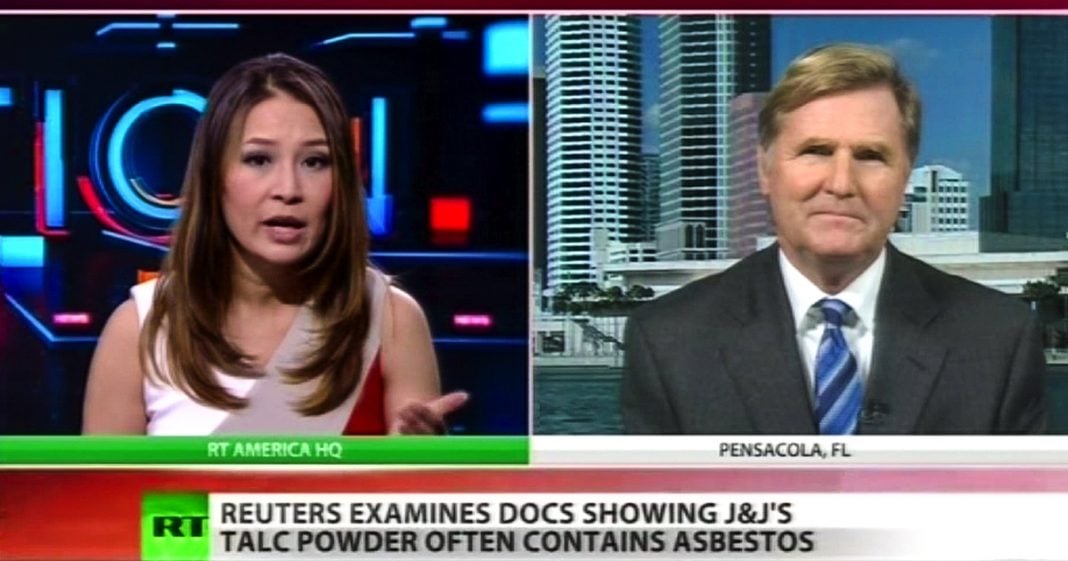 Click here to learn more about the dangers of talc baby powder.

Anya Parampil: Thousands of individuals currently suing J&J are women who claim they’ve developed ovarian cancer because they’ve used Johnson & Johnson products and they’re not alone. In July of this year, a St Louis jury demanded Johnson & Johnson pay $4.7 billion in damages to 22 women for that very reason. Still Johnson & Johnson’s outside litigation counsel told Reuters, “The scientific consensus is that the talc used in talc-based body powders does not cause cancer. This is true even if – and it does not – Johnson & Johnson’s cosmetic talc had ever contained minute, undetectable amounts of asbestos.” These denials directly contradict the internal memos and reports now available online for all to see. In Washington, Anya Parampil, RT.

Manila Chan: And now with the Johnson & Johnson lawsuit in question, we’re being joined now by attorney and host of America’s Lawyer right here on RT, Mike Papantonio. Pap, great to see you. So full disclosure for the viewers, you’ve handled some of these cases involving Johnson & Johnson. The company obviously has an iconic brand. It’s a household name for decades, generations even. Can you first give us a summary of why there are thousands of lawsuits against J&J?

Mike Papantonio: Well, not only have I handled the Johnson & Johnson case, but I also handled some of the first, asbestos cases tried in America. Actually in Florida, I probably tried some of the first asbestos cases ever tried and we knew back then that it was very clear that tremolite, and tremolite is a type of asbestos. It’s a type of asbestos that Johnson & Johnson found in their talc as early as 1957 and there’s something else we knew about tremolite in 1957. We knew it would migrate through the body. It could move through all parts of the body and we knew that it would cause cancer sometimes 30 to 40 years after the exposure to the tremolite.

So in 1957, the company finds it. They’ve always known that it causes lung cancer. It causes Mesothelioma, and more importantly they knew it would migrate through the body. So these women that are using this talc powder, wherever they’re using it, it migrates by inhalation, it migrates by the various parts that they, where it’s applied to the body. More importantly, in 1976, the FDA clearly acknowledged, it was no, there was not a question in America, the FDA, they acknowledged that this tremolite causes cancer. And then Johnson & Johnson had to lie to the FDA. They literally had to approach the FDA and say, you know what, we did testing between 1972 in 1976 and we didn’t find any asbestos. That was a complete utter lie. It was phonied up. The documents showed that they actually had that information.

Manila Chan: Well Pap, the company has consistently maintained that their talc is safe. It’s vice president of global affairs, he said this in a very recent statement, he said, “This is all a calculated attempt to distract from the fact that thousands of independent tests prove our tap does not contain asbestos or cause cancer. Any suggestion that Johnson & Johnson knew or hid information about the safety of talc is false.” Your thoughts on that?

Mike Papantonio: Yeah. Well, first of all, what Johnson & Johnson has to do right now is they are in very, very bad shape on this issue. They have to fight their way out of it. They understand that because of the latency issue, they can say that, yeah, we don’t have any asbestos today, but the lawyers who have, you know, Mark Lanier, very good friend of mine, we’re handling several different types of cases together. He actually had the testing done.

They tested over a long period of time to find whether or not, going back in time, whether or not there was asbestos in the talc, they clearly found it. So J&J says, this is literally their defense, here’s what they say. First of all, they hire these biostitutes who will go out and say anything for the right amount of money. One of them is guy named Sanchez.

Sanchez, he’s hired to go across the country and testify on behalf of Johnson & Johnson and say, you know what? They A, there wasn’t any tremolite, but here’s what he says next. If there was tremolite, it’s a different kind of tremolite, and it won’t cause cancer. All of the science says just the opposite. All you have to do is look at their own documents. In their own documents they’re talking about, we’ve got to find a way to find clean uncontaminated talc because we’re afraid we’re going to be sued.

Robert Johnson, who was the CEA, expressed concern about the effects on babies and mothers’ lungs as early as 1970. So I mean, you’ve got, the documents are there. They can’t rewrite the documents, so all they can do is to say it’s all a lie. It’s all being chummed up by lawyers. They’re simply causing hysteria. Nothing is further from the truth. They anticipated being sued, sued as early as 1970’s.

Manila Chan: So it’s been deny, deny, deny all along. But the controversy though, surrounding the talc powder, really hasn’t shaken investors because J&J stock is overall for the year up more than five percent. So given America’s seemingly unwavering dedication to using this stuff, what sort of obligation does the company have to the public, if any?

Mike Papantonio: Well, all that has been argued in trial so far is they at least had the, they should have warned. Give people a choice. Say you can use our powder that, oh by the way, contains asbestos, or you can use something else that doesn’t contain asbestos like cornstarch. So the, at the fundamental heart of this is that you give people a choice. You give a mother a choice whether she wants to put asbestos on her child. You give a mother, a woman, a choice as to whether she wants to use after shower powder, give them a choice.

Say, do you want to use asbestos powder or do you want to use something that cause, there’s no threat of cancer. We’re going to see cancer cases continue to rise. Mount Sinai did studies on this, a guy named Selikoff, who I used to have as an expert witness in the early asbestos days. Selikoff saw it coming all the way back then. He said tremolite is dangerous. Chrysotile is dangerous. Virtually any form of asbestos exposure is dangerous to the human body.