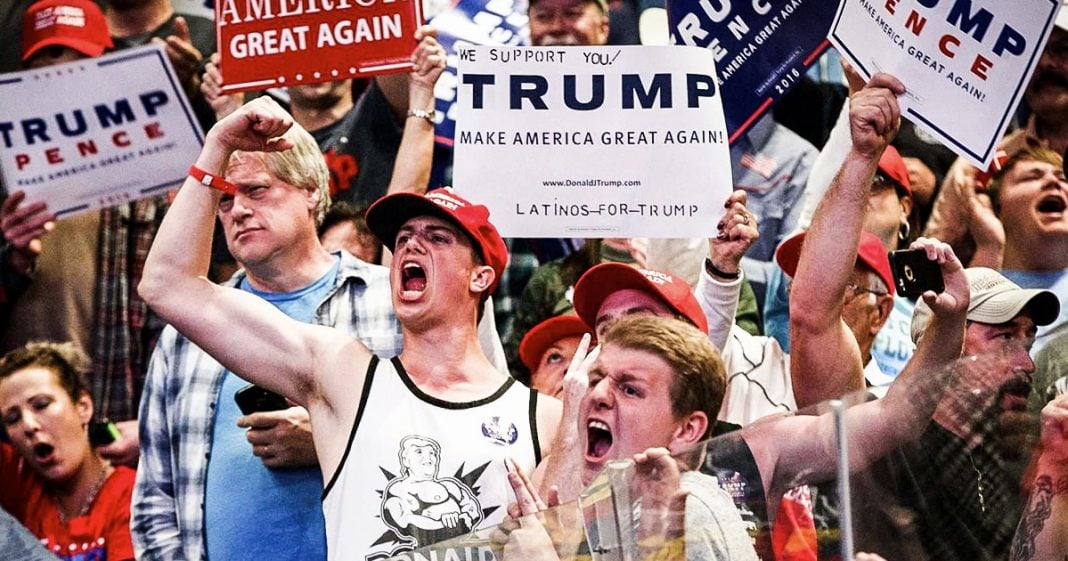 As it becomes more and more obvious that Congress is NOT going to give Donald Trump the money that he needs to build his border wall, his supporters are trying to think of creative ways to get the wall built. On Fox & Friends Monday, one guest suggested that Trump’s supporters could pay for the wall themselves by crowdfunding the operation and each donating about $80. Ring of Fire’s Farron Cousins talks about the desperation Republicans are facing at this moment.

On Monday, New York Post columnist, Michael Goodwin went on Fox and friends on Fox News and he laid out a new plan for how to pay for Donald Trump’s border wall. Now, here’s the reason he even wanted to talk about this, obviously with Democrats taking back over the House of Representatives and just a week and a half or so, uh, the budget is not going to include any funding for the border wall. After Chuck Schumer finally saw how to stand up to somebody by following Nancy Pelosi’s lead in that meeting with Trump, he is also not likely to give Donald Trump the $5,000,000,000 that he wants to build his stupid wall. So Michael Goodman goes on Fox and friends and he lays out this plan. Here is his quote, uh, well first, Brian Kilmeade asked, is there a private way to do this? Like maybe privatized the wall in Goodwin responded thusly, you can create a go fund me operation.

Others suggest a other ways. There is an existing effort, I think a fund the wall.com run by a sheriff’s association that’s raised some money, but nowhere near what is needed and yet according to my mail, a lot of people are willing to chip in. One reader writes to me and says, if the 63 million people who voted for Donald Trump each contributed 80 bucks, that would get you near the 5 billion mark. I think that’s the kind of thing that needs to happen. It could be a people’s wall, uh, people’s wall, right? I, that’s what this is about, is about people coming together and emptying their wallets and their bank accounts because they hate nonwhite people so much because let’s call it what it is. That’s what the border wall is all about. Hating nonwhite people, hating those immigrants that Tucker Carlson loves to bash every night. So sure, Donald Trump supporters, all 63 million have you go ahead and send $80.

I don’t know where, maybe the go fund me thing that they’re kicking around at this point and let’s see how good that actually works out for you. Because in reality, we know that would never come to fruition. There is not enough honest people on the Republican side to actually run a go fund me that even if it made $5,000,000,000, do you know what would happen? Whoever started it would probably leave this country with that money and you’d never see them again because that’s how Republicans are. But Hey, you knew you, right? You go ahead and fork over that $80. Even though we know that the Trump supporters in this country are the ones who were being hit the hardest with Donald Trump’s trade wars. They’re losing their jobs. They’re losing their livelihoods. They probably at this point do not have $80 to waste on a stupid border wall, and you had a lot of them probably do blame immigrants for their ills right now. Even though 100 percent of those ills are actually coming directly from Donald Trump and the republican party themselves.

I don’t even know what else to say at this point. They’re actually considering actually talking about it like it’s a real possibility of having Trump supporters all 63 million fund the border wall by each kicking in 80 bucks. That tells you everything you need to know about Republicans today because this border wall is not about our safety. It’s not about our security. It’s not about protecting our economy. It’s about protecting white identity from people who are too afraid of any non white person and those idiots might just be stupid enough to fork over $5,000,000,000 to prove to everyone how racist they truly are.