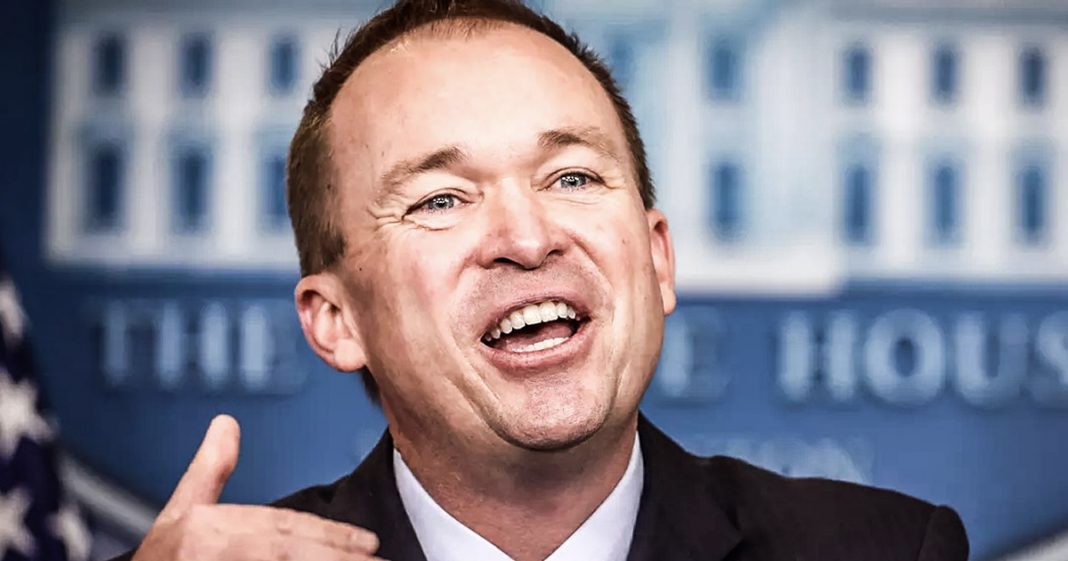 Donald Trump has selected Mick Mulvaney to be his new chief of staff, or at least fill in for a while after John Kelly leaves, but Mulvaney has made it clear in the past that he isn’t a fan of Trump’s. In an interview in 2016, Mulvaney admitted that he’ll vote for Trump but also that he’s a “terrible human being.” This should go over really well, as Ring of Fire’s Farron Cousins explains.

Donald Trump has finally decided on who the next chief of staff for his administration is going to be, and it’s none other than Mick Mulvaney from the office of Management and budget as well as the Consumer Financial Protection Bureau. I guess after destroying both of those agencies, Donald Trump decided that was the guy for his administration and it actually gets worse because Mulvaney is not just the kind of guy who enacted as corporate policies over at the CFPB. He also back in 2016, while he was running for Congress called Donald Trump, a terrible human being. Here is the exact quote. This is from a a campaign debate. In 2016, we’re Mulvaney was running for Congress and he said the following, he said, yes, I’m supporting Donald Trump. I’m doing so as enthusiastically as I can given the fact that I think he’s a terrible human being, but the choice on the other side is just as bad.

So Trump told us a few days ago actually, the people were just lining up out the door to be his next chief of staff. He said there were tons of people, at least 10. It’s actually what he said, at least 10 people, but we know from reports that so far everyone that he had asked turned them down. They didn’t want the job. That includes Nick Ayers, Steve Mnuchin, all kinds of other people from this administration said, yeah, thanks, but no thanks so really cannot. Contrary to what the president was telling us, nobody was lining up to take this job because nobody wanted it. Except I guess for Mick Mulvaney and again, the best person Donald Trump could find for this job is a guy who thinks that he is a terrible human being. Here’s the thing about Mulvaney though. Mulvaney is a hardcore regular style Republican. You know, he’s not as brash as Donald Trump, but he is 100% a corporatist.

He’s the kind of guy that’s going to do what corporations want him to do. He did that when he was in Congress. He did it at the CFPB. He’s going to do it for the Trump administration, which could create a little bit more goodwill between Corporate America and the Trump administration as if they actually needed any of that, but in terms of actual policy, in terms of advising, you know, foreign policy matters. Mulvaney is going to be a complete disaster. He is going to be a spineless, yes man for the president, and we’re going to see a lot more horrible policies, probably more horrible tweets coming out of Donald Trump because Mulvaney is not a stand up guy. He’s not the guy to go to. Donald Trump would say, no, you are wrong about this. We can’t do this. Let me explain it to you. Instead, Mulvaney is going to say, you know what? Yeah, you’re right. That’s good. Let’s do that. Mulvaney is going to be an absolute disaster, but as long as he continues to not stand up to the president and blanketly tell him that everything he does is wonderful, then I think he’s going to have a very long tenure as the chief of staff.