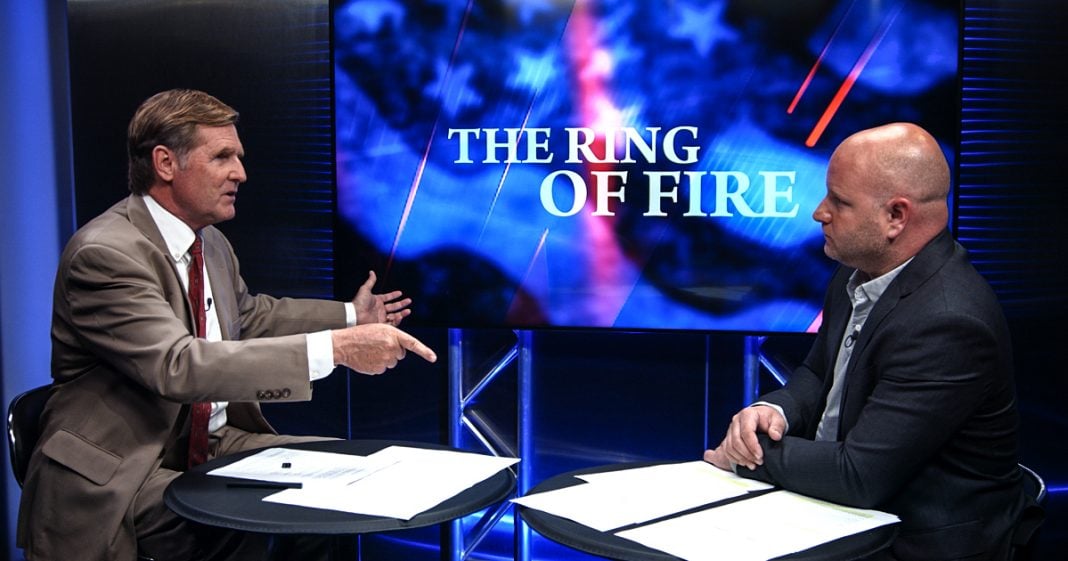 Johnson & Johnson recently got hit with nearly five billion dollars by a jury for covering up the dangers of their talcum powder products. Ring of Fire’s Mike Papantonio and Farron Cousins discuss this issue.

Mike Papantonio: Johnson & Johnson recently got hit with nearly five billion dollars by a jury for covering up the dangers of their talcum powder products. A friend of mine is the one that got his verdict, Mark Lanier, wonderful lawyer. I’ve known Mark for a very long time. The first time he started talking to me about he was going to trial with this case, the thing that struck me is what he was doing is, he was showing why these women were getting ovarian cancer. What was it that was causing the problem?

When he ran it down, he actually found out that asbestos is contained in the talc. Where they do the mining they, by necessity, have to mine asbestos unless they have a mine where there is no asbestos. Plenty of places they could have mined, but they went to mines because they could get the cheapest deal on talc, and they’d been putting asbestos in baby powder and talcum powder for decades now.

They found it migrated, that the asbestos fiber, once it’s put in the body, migrates throughout the body. As matter of fact, I handled asbestos cases early on and we proved migration then. This lawyer’s a superb lawyer. His name is Mark Lanier. He’s out of Houston, Texas. He actually built this theory and what it does is, it puts Johnson & Johnson in a, it is a come-to-Jesus moment.

They need to either own up, figure out how to take, compensate some of these people that have died, and get this product off the market or face bankruptcy.

Farron Cousins: You know, this one, 22 women in this particular recent suit, almost five billion dollars, which is a huge verdict.

Farron Cousins: Johnson & Johnson so far has lost every single case in the first round. Some of them have been overturned or reduced on appeal, but they’re losing, losing, losing.

Farron Cousins: And those appeals are, obviously it’s gonna continue to be appealed but what they’re not able to overcome is that the science going back to 1971 shows that, hey, this talcum powder, even the talc that is not contaminated with asbestos-

Farron Cousins: Because those are, I mean it’s two crazy things. But even just the talc itself-

Farron Cousins: Can embed itself, and most of these are women, that gets embedded, causes ovarian cancer.

Mike Papantonio: Yeah, people, let me explain a little bit of the science, okay? The science, the cancer it causes is called a scar-based cancer. In other words, if you have a scar on your lungs, for example, this used to be what you would see with pneumoconiosis. Miners would have this. Asbestos workers would have this. But the scar itself creates abnormal cells. Those abnormal cells develop into cancer.

So what your point is, and it’s a very good one. I led with the idea of the asbestos, you don’t even have to have the asbestos part of this to have a case against Johnson & Johnson. You know, all I can figure, Farron, is I look at this case is, as you pointed out, they’ve lost every case except one. I think the first case that was tried maybe was in Wyoming or Montana. It was a long-shot case, but every case since has been 70 million, 80 million, 75 million, 400 million, five billion.

But the underlying case, the actual women dying of cancer related to this, I’ve analyzed this every kind of way and for the life of me I don’t see how they get out of it. Because they can count on the US Supreme Court. That’s really what a lot of these corporations are doing now. They’re holding out for the Kavanaugh appointment, holding out until they’re sure that this Supreme Court is fully corporate, and then they’re gonna try to test these cases all the way to the top.

Farron Cousins: Well you know, this is one of the few where I actually got to go and I got to see some of the documents through some of the case work on this and it really is astounding. I mean there’s no question whatsoever, and I know this is what the lawyers in court are presenting, that Johnson & Johnson knew about the risk.

Farron Cousins: They absolutely, 100% knew it. They told their people, “Let’s not focus on this. Let’s tell them that it’s not settled.” And here we have IARC, back in 2006-

Farron Cousins: Right. 2006. They declared “possibly” carcinogenic to humans, which means most likely. Not “probable,” which means you’re pretty much gonna get it.

Farron Cousins: So, they label it “possibly.” Here in the US, the agency, it is the US National Toxicology Program, which is part of the Department of Health and Human Services, they won’t classify talc itself as a possible human carcinogen because, according to them, they haven’t had time to go through the science.

Farron Cousins: That’s how sad that is.

Mike Papantonio: Let me explain this just a little bit, okay? We saw a similar analysis. You see these companies attacking the World Health Organization every time they come out with something that hurts their corporation. For example, Monsanto.

Mike Papantonio: We’ve talked about Monsanto. It’s very clear that Roundup causes cancer. I don’t think anybody that’s honest with themselves is really asking, “Is that true?” It is true. World Health Organization comes out, so what does the corporation do? Rather than saying, “Okay, well, you know human life matters. Profit, yeah, it matters but we can’t make a profit on the backs of human lives.” You would think they would do that but instead they attack the World Health Organization.

Mike Papantonio: Probable carcinogenic. But here it was “possible” and they attacked them anyway. It’s the same formula. I know we see this same formula case after case-