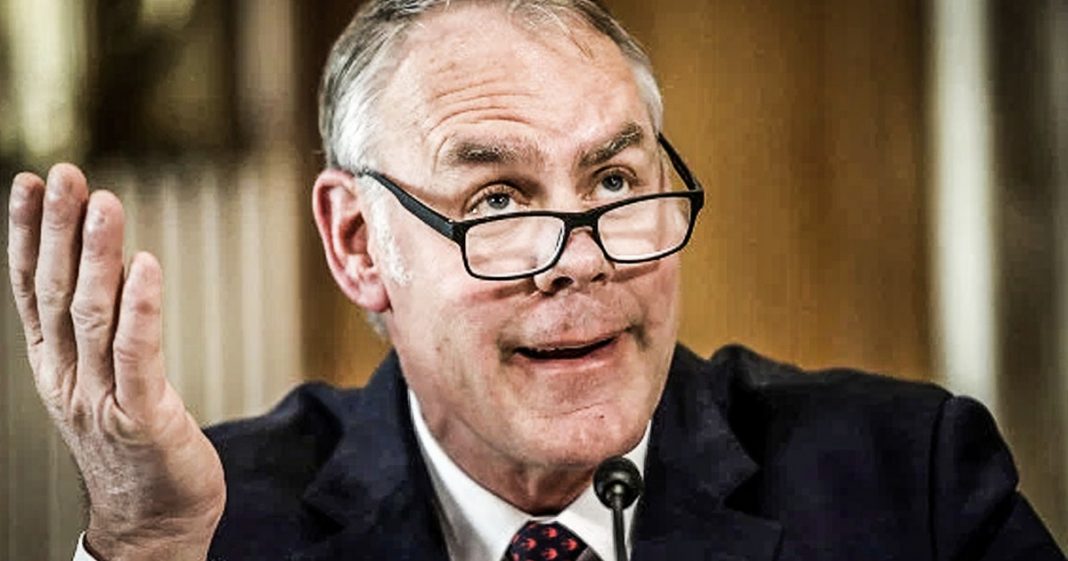 Ryan Zinke, the Secretary of the Interior, has been forced out of his position after being the target of at least 17 different investigations. Some of those investigations have concluded and could not nail Zinke for criminal activity, but at least 9 of them are still ongoing and his departure won’t put an end to them. Ring of Fire’s Farron Cousins discusses this.

It was announced at the end of last week that Ryan Zinke, the secretary of the interior, was going to be resigning in the very near future except that resigning is really not the word that you should be using there because what actually happened behind the scenes is that Ryan Zinke was forced out, in fact, the administration had allegedly been trying to force him out and get him to quit for several weeks, if not several months at this point, and here’s why. Ryan Zinke has been the target of at least 17 different investigations in the two short years that he has been serving as the secretary of the interior. 17 potential criminal activities that Ryan Zinke was implicated in that then warranted investigations. Some of those have kind of closed and they said the results were inconclusive. They were not able to clear him. They were not able to convict him. However, there are currently nine open investigation still happening with Ryan Zinke and the good folks at citizens for responsibility and ethics in Washington were kind enough to lay out an entire list of all of these investigations.

So let me read some of these out. These are just the ones that are still ongoing. These do not include any of the closed ones, but you can find those in the link in the description of this video. So here they are. He blocked a casino project after meeting with lobbyists that’s being investigated by the Department of Interior, Office of Inspector General. Potential Hatch Act violation with a Florida drilling announcement, censorship in a climate change report. The inspector general is looking at that as well, a hatch act violation with his make America great again slogan that he tweeted out, real estate and microbrewery deal with an oil services executive, spent $139,000 in taxpayer funds for office doors that’s being investigated by the House Oversight Committee. His involvement in the plan to shrink national monuments. The inspector general is looking into that because they believed that he stood to gain financially from this, uh, his retaliation against a whistleblower and his official trips that included his wife at taxpayer expense is.

So these are the nine ongoing open investigations into Ryan Zinke right now. And I guess for even the Trump administration, this was a little too much corruption. So they had been wanting this guy gone for quite some time. The problem is they didn’t want to publicly fire him. They didn’t want to force him out publicly because they still liked what he was doing. Kind of like Scott Pruitt, you know, these were two men who are corrupt as hell, but they are still doing everything that this administration, that Republicans and that corporations want them to do. That is what both men brought to the offices, Scott Pruitt, the EPA Zinke with the Department of the interior, you know, censored climate change report, selling off our national monuments to oil drillers and coal miners, you know, so they could destroy these beautiful places in the United States just to extract a little bit more of those fossil fuels that we as a country are so addicted to that is going to be Zinke’s legacy. And even if he leaves that does not clear him or absolve him from any of the conduct that he engaged in while he was in office. These investigations can still continue. The only question is whether or not the organizations or the government bodies looking at them want to continue after he leaves. They likely would not, but if they chose to, they could 100% complete these investigations and if necessary, filed charges against Ryan Zinke long after he leaves this administration.