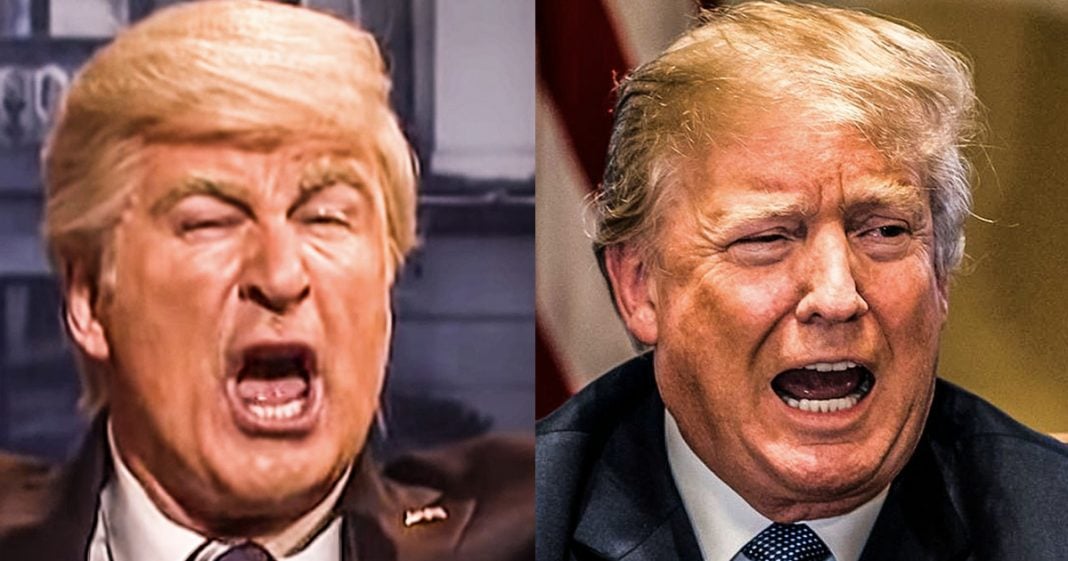 The President was not happy with Saturday Night Live this past weekend where he once again took a decent drubbing from the show, but on Sunday he tweeted out that there must be something illegal about what they’re doing and clearly they are working with the Democrats. Donald loves to play the victim, but as Ring of Fire’s Farron Cousins explains, other presidents have gotten it far worse from SNL than Trump has.

If you were following Donald Trump’s Twitter feed this past week and first of all, my condolences for having to do that, but second of all, you probably know that Donald Trump did not have a very good weekend and part of the reason he didn’t have a good weekend is once again because of Saturday Night Live, allegedly making fun of him and I say allegedly because yeah, they were making fun of him, but that’s what they’re supposed to do. It’s a comedy show, a variety show. They poke fun at all topics, especially those that are timely, which would fall into the category of the president of the United States, but nonetheless, Donald Trump got angry about something that aired on Saturday Night on Saturday, and he tweeted out the following on Sunday morning. A real scandal is the one sided coverage hour by hour of networks like NBC and Democrats. Spin machines like Saturday Night Live.

It is all, nothing less than unfair news coverage and dim commercials should be tested in courts. Can’t be legal. Only defame and belittle. Collusion? Alright, let’s start addressing his little non sentence sentences there. First of all, the one he ended with collusion, does Donald Trump actually think that Saturday Night Live is somehow working with the DNC to make him look stupid because we don’t need Saturday Night Live for that. We have your Twitter feed. We have your public speeches. We have used struggling to close an umbrella and then saying screw it and leaving it outside Air Force One. We do not need any help making you look stupid. Second, can’t be legal. Should be tested in court. Are you threatening to sue Saturday Night Live because they skewered you a couple times? Do you not understand that that is something Saturday Night Live has done to sitting presidents since they started or they made fun of Gerald Ford as some aloof doofus, Ronald Reagan as this kind of space case, not knowing what’s going on.

George W dot Bush was this an automaton robot, just couldn’t figure anything out. Bill Clinton was a sex crazed maniac on the show. George W dot Bush. They portrayed him as borderline, mentally challenged, and Obama they portrayed is almost too weak to do anything effectively or in some cases too worried about being cool, so no, you have not gotten it worse than other presidents have from Saturday Night Live and you are certainly not the first president to ever be mocked by that show. That is what happens, but if you can’t take it, if you’re that thin skinned that you are now wanting to possibly sue them because they’re making fun of you, then you picked the wrong job. Buddy. The president of the United States is one of the most criticized and scrutinized people in this country always has been and always will be. Why? Because they’re the person that’s supposed to be our leader and we need to know pretty much every facet of their lives.

If they want to go out there and say, I’m going to represent the United States on the global stage than we need to know everything. We need to look under every rock. We need to flip over every rotting log and see what’s under there, and that is what’s happening to you. Saturday Night Live is doing nothing different with the way they portray you and the way they had portrayed portrayed. Every president since this show came into existence. It’s just that we’ve never had a president as whiny and babyish as you are, to actually throw a Tantrum, a temper tantrum in public because you don’t like that. They’re not being nice to you.