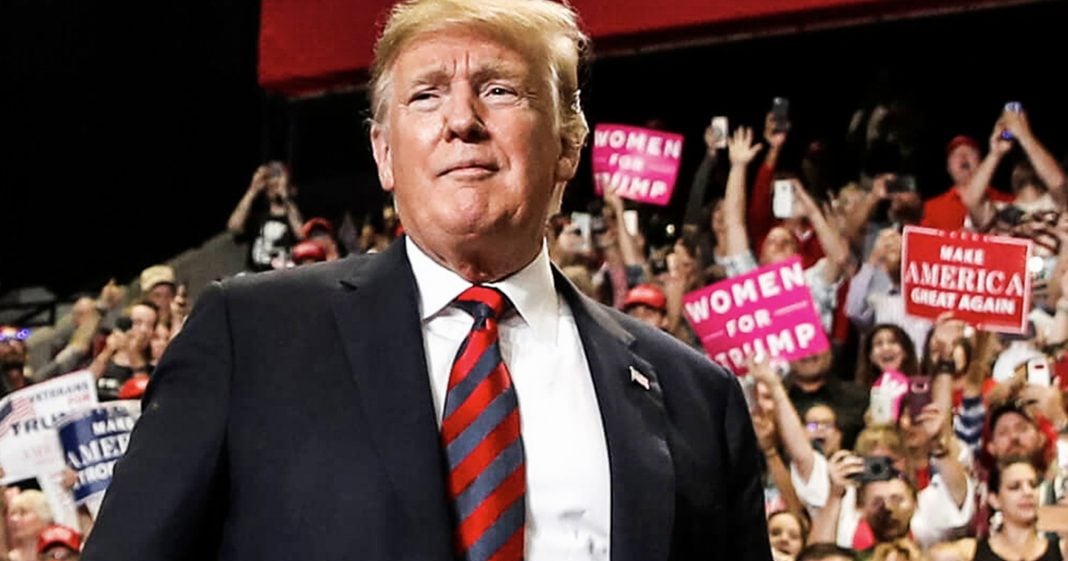 According to new reports and interviews, the most ardent MAGA hat-wearing folks in this country are finally starting to see the light and they are having a hard time believing Trump’s claims of “witch hunt” with regards to the Mueller investigation. This could be the media selecting just a few Trump people who are ready to jump ship, or it might be proof that there are cracks in the base. Ring of Fire’s Farron Cousins discusses this.

Two reports have come out this week saying that some members of Donald Trump’s hardcore MAGA hat wearing base are starting to not believe his cries of witch hunt. The two reports, one from axios in one from CNN say that some of the most ardent Donald Trump’s supporters in this country are starting to believe that these investigations are bad news for the president and not because it’s giving him bad publicity, but because they’re starting to think that he may have actually committed the crimes that they’re saying he committed. As I said a few seconds ago, they don’t believe his cries of witch hunt any more. Now, here’s the thing, and this is why we have to take these kinds of reports with a grain of salt. It is possible that Axios and CNN and whoever else is reporting this. They went out there and they managed to find the two or three hardcore Trump supporters who are starting to say, you know what?

Maybe there is something to these investigations so they could have cherry picked their people. That’s always a possibility. What is also a possibility is that cracks are starting to surface in the facade of Donald Trump’s base. I believe that is happening here. I believe we’re starting to see some of that. It’s not going to be on a large scale, but if you start with one or two people and they start telling their hardcore, Donald Trump supporting friends. You know what though? You know what though? There’s something to this, that law suit up in New York that investigation up in New York that has nothing to do with the Russians. That’s the big one and that’s actually what a lot of these Donald Trump’s supporters are out there saying right now. They’re worried about that one. They’re worried about Mueller now too, but they’re more worried about what’s happening in New York and the fact that Donald Trump is very clearly individual one.

It’s getting harder and harder for the president to convince people that he did not break the law, especially with regards to the campaign finance violations that are at this point crystal clear from the testimony of Michael Cohen, the tapes from Michael Cohen and everything else that has been uncovered in that particular investigation. Now whether or not they believe that that warrants removal from office is another animal entirely, and that’s not necessarily something that these other reports we’re talking to these people about, and to be honest, it’s not even time to start having those conversations just yet. That is still the thing we have got to be very patient on. It has to be crystal clear. It has to come from one of these bodies that is investigating the president. If people in the house try to go too soon, try to move on the president, like he said, he used to move on people in that access Hollywood tape, but if they move on them too soon, they’re going to blow it.

You’re not going to get a second opportunity for this. Wait for the information, wait for it all to come in, wait for that base to crumble a little bit more. That’s what’s really important here too, because if Democrats are sitting in DC and they’re working on policy instead of investigations, letting the independent bodies out there do the investigations for them as they already are, then the Democrats can finally come back and say, all right, 2020 voters. Here’s the legislation that we put together, the Republicans. Here’s all the list of them who didn’t vote for it. We’ve been trying to have your back. We’ve been trying to make the country better. Oh, and by the way, have you seen the results of those investigations? Those look really bad. Your party said that these weren’t actually crimes, but it turns out they are, so now you have a very clear choice.

You have a party that’s cool with criminal sitting in the White House that voted against all of these policies that you specifically told us you wanted or you can vote for us because we’ve got the legislation ready to go today and can probably sign it and have it in law within the next month or two. That’s the choice that these voters are going to have to make and that is why it is incredibly important for Democrats to make sure they’re working on policy first and investigations second. Nothing comes before policy. We’ve got Mueller doing investigations, we’ve Got New York doing investigations and those alone are doing a good enough job of eroding a little bit of Donald Trump’s support, which is going to be vital for the Democrats to win back the White House in 2020. And if they put the nail in the coffin by focusing more on policy and selling that policy to the public than I don’t think Trump stands a chance in the 2020 election.