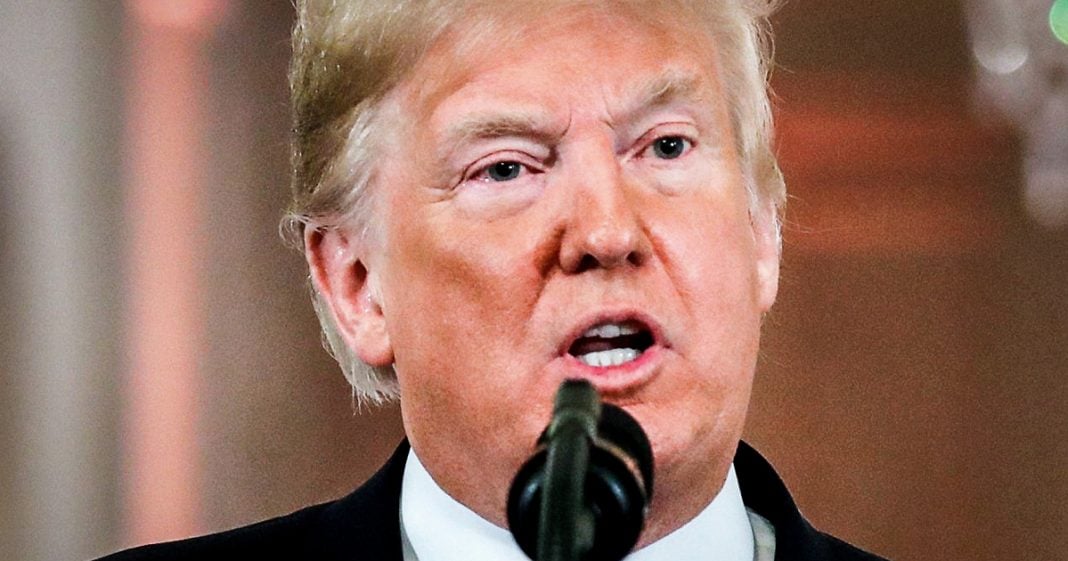 According to a report in the Wall Street Journal, Donald Trump is growing concerned over the fact that the morale of his staff is low, and he can’t trust any of them. He’s finally starting to realize that they not only hate him, but they also hate their jobs. This helps explain why Trump is struggling desperately to find someone to be his new Chief of Staff as more and more people refuse the position. Ring of Fire’s Farron Cousins discusses this.

According to a report earlier this week in the Wall Street Journal, Donald Trump may have finally realized that everyone on his staff actually hates him. Now, according to this report, Donald Trump right now is actually concerned about several things. First and foremost, the fact that staff morale is low. Well, you know, if you were a good boss, you would always be concerned about staff morale. That is something even major corporations try to work on. Some of them even have departments that specifically only work on doing things to make their employees happier. The second thing you’re worried about is in terms of the low morale, is that they’re disloyal now, right there you lost any goodwill you may have had about worrying about their morale and worried about your employees not liking their jobs because you’re not worried about them not liking their jobs because, oh, there’s a human being suffering. No, you’re worried about how it affects you and the future of your White House.

That’s what you’re concerned about. You’re concerned. People are disloyal and third, according to Wall Street Journal, he’s also upset about the fact that all of the coverage of him in the press is negative. Listen, body, nobody in this country is entitled to positive press. If you want good reports on you, go do good things. Maybe stop using the military as a political prop, maybe stopped pushing for a multibillion dollar wall that will do nothing to solve our immigration issues. Maybe just hear me out on this one. Stopped taking the sides of dictators who say that climate change isn’t real and start listening to scientists. That’s another thing you did this. Week two, you took the side of a a Putin and Mohammed bin Salman who also signed on and said, no, we don’t agree with the harsh language in this climate report. You took their side over the side of scientists you more on, but yeah, I understand why you’re worried about low staff morale.

First and foremost, you don’t have enough staff to properly do your job and that’s basically been the case since day one. The number of staffers in the White House is inadequate because they have not been able to find enough people, even low level people, and I don’t mean that offensively to go and just work there to do things, to keep the day to day functions going. Now you’re losing your chief of staff and you can’t find anybody to replace him and can you blame them? Really? Who would want to walk into this? You know, let’s even look at the best case scenario at this point for you. Not for the country obviously, but let’s say you actually didn’t do anything wrong. You did not break any laws. Let’s say the Mueller report comes out and says, your squeaky clean. You’ve never done anything illegal in your life. Michael Cohen line about you being individual one and you’re free to go.

Even if that were the case. What person hates themselves enough to come in as your chief of staff while you’re sitting there screaming, witch hunt, screaming at Democrats, insulting people on twitter, insulting people in real life. Working with two of the biggest liars in DC included that Sarah Huckabee Sanders and Kellyanne Conway, who wants to jump into that fray, not to mention you got the mustachioed John Bolton in your ear saying, war, war, war, war, war. Nobody wants to do that, so can you blame them? Even some of the most horrible people you could think of like Mnuchin or Mulvaney, they don’t even want that job because you’re uncontrollable. You’re irrational, and more importantly, they understand that that best case scenario I just described that has basically a zero percent chance of happening. Things in your White House are going to get so much worse over the coming months and there is nobody who wants to volunteer to captain that ship as it’s going down.