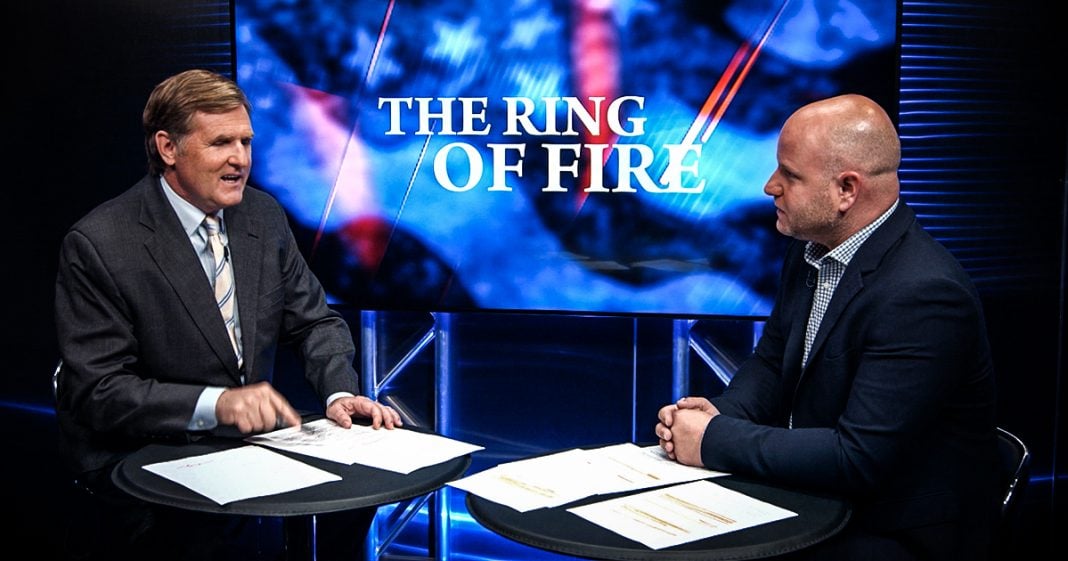 The story continues to get crazier, as Johnson & Johnson gets hit with multiple million dollar verdicts for selling baby powder filled with cancer-causing asbestos to the American public. Ring of Fire’s Mike Papantonio and Farron Cousins discuss this.

Click here to learn more about the dangers of talcum powder.

Mike Papantonio: Johnson & Johnson headed back to court this week to fight another lawsuit from a woman who developed cancer after years of using Johnson & Johnson baby powder. This story just continues getting crazier. The last verdict that was taking place was in New Jersey?

Farron Cousins: I believe so, yes.

Mike Papantonio: They come back with a multi-million dollar verdict against Johnson & Johnson. The interesting thing about it is Johnson & Johnson has lied and told the American public, “We don’t have asbestos in our baby powder.” And now the lawyers that are trying these cases, not only are they showing the jury here’s the asbestos fiber. They bring in scientists. They do a scope, the material, and they’re able to show the asbestos fiber right there. Amosite, chrysotile asbestos. It’s right there. And so years and years the company’s been saying, “Oh, you don’t have to worry about asbestos.” Now, women are dying from cervical cancer because they used this Johnson & Johnson baby power their entire lifetime, and they’re dying from mesothelioma.

Farron Cousins: Right, and this woman in this particular lawsuit that began on Monday of this week, she died from a very rare form of cancer they said at age 30.

Farron Cousins: But she had used baby powder all her life, so she’s dead at age 30 because of Johnson & Johnson. What’s interesting about this case too and at first I didn’t agree with it, but the more I remembered about this case, ’cause you and I have spoken about this.

Farron Cousins: We’ve seen the documents, yeah. They brought in … another one of the defendants is Rite Aid, the pharmacy.

Farron Cousins: And so at first I thought well you can’t necessarily hold them accountable for it, but then I remembered the marketing materials. Johnson & Johnson worked with the pharmacies to create these big display ads.

Farron Cousins: The pharmacies were complicit with it to make sure that they pushed this talcum powder especially in low income communities. They would go to areas with higher populations of African-American and Hispanic women and market it to them.

Mike Papantonio: It’s a cultural issue. A lot of these children grow up with the parent putting baby powder all over them and they’re told, “Well, you got to do this all your life. This will make you smell better. This is good hygiene.” And they’re told there’s harm in that. The whole time that they were doing that with Johnson & Johnson talc powder, it had asbestos in it.

I mean, it’s like … Look, where do they get the talc? They get out of mines. They’ve looked at the mines where they get the talc. There’s asbestos all over the talc mines. And so all of a sudden it’s another deal where we keep … Johnson & Johnson keeps telling this lie and they’ve been hit for 78 million, 75 million, 117 million.

Farron Cousins: Right. What has it been? Five verdicts so far?

Farron Cousins: And hundreds of millions in total that they’ve paid out ’cause they’ve lost every single case ’cause they’re lying?

Mike Papantonio: What tells you that is those are different juries, you see.

Mike Papantonio: Those are different juries that hear the facts. They see the documents.

Farron Cousins: They see the fiber.

Farron Cousins: Because, yeah, that’s another thing people have to understand. They do, they’re literally taking the fibers out of these cancer tumors …

Farron Cousins: … and they can examine it and see this-

Mike Papantonio: They found it in the tumor.

Mike Papantonio: They all-

Farron Cousins: … and it stays in there.

Mike Papantonio: Yes, and they also find it in actually in the powder. Well I got to tell you, we’re used to that. We’re used to these denials that we see from these companies all the time, but it always ends badly. This is a big problem. Johnson & Johnson better figure out how to deal with this ’cause their stock is going to start crashing.