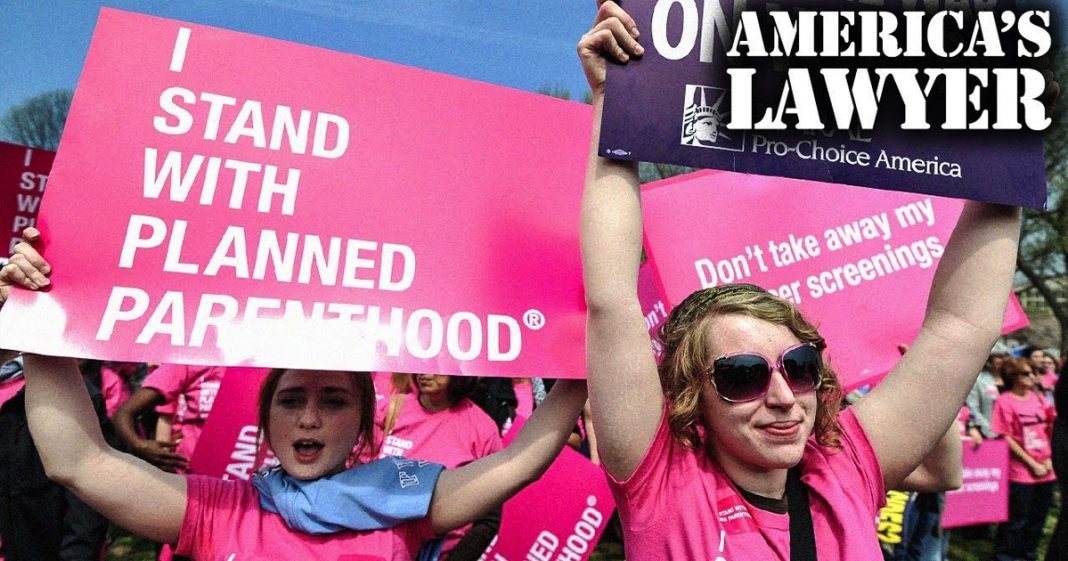 Via America’s Lawyer: Farron Cousins fills in for Mike Papantonio, and is joined by Legal Journalist Mollye Barrows to talk about the U.S. Supreme Court declining to hear a case brought by Republican-led States that were seeking to defund Medicaid funding for Planned Parenthood.

Farron Cousins: The US Supreme Court has declined to hear a case brought by Republican led states seeking to cut Medicaid funding for planned parenthood and other organizations that provide women’s reproductive health services. Joining me now to discuss this is Mollye Barrows, legal journalist for the Trial Lawyer Magazine. Mollye, this case does not actually revolve around federal money being used for abortion services, correct?

Mollye Barrows: Correct. This isn’t about whether or not they can use federal money to provide abortion services. This is about whether or not states can block Medicaid funding to the affiliates of Planned Parenthood, which provide the services and other sort of a preventative care for women or even post care for women that are in the lower income bracket. So two states, Kansas and Louisiana are the ones that brought this to the court and essentially they wanted to terminate Medicaid contracts with affiliates of Planned Parenthood. And they wanted the Supreme Court to overrule the decisions of two lower courts, which stated that they legally could not terminate these contracts without cause, because that’s what they wanted to do was terminate them.

You know, we don’t like the services that you’re providing. We just want to terminate them and I’ll explain more about that in a second. But the Supreme Court was like ix nay on that idea. Sorry, we’re not going to hear the case. We’re just going to go ahead and instead let these two lower court rulings stand. So basically they declined to hear it and they essentially sided with Planned Parenthood in the case who said no, they’re not allowed to terminate us without cause. And they said, yeah, we agree we’re not going to hear it. So good for us.

Farron Cousins: So this wasn’t like, well you know, oh we’ve got to end the abortion. It was, we’re going to focus on the contract because that’s what’s actually the issue here. And no, you wanted to make it about this issue, but you really can’t do it. You’re kind of twisting things. You can’t end their contract because they have the contract. So that’s really gotten, I’m glad that.

Farron Cousins: I’m glad the courts actually lean this way. And speaking of leaning one way or another. Interesting thing at the Supreme Court, because you had the three conservative justices who said, yeah, let’s go ahead and hear this, but then you had Roberts and Kavanaugh who said, no, no, we’re not touching this.

Farron Cousins: How awkward is that for these guys?

Mollye: I know, and it’s extremely interesting because basically you needed four of the justices to say yes, we’re going to hear this case for it to become on the docket, for it to be on the docket for the Supreme Court to hear it. So because only three of them voted to here the case, it wasn’t determined to be heard by the Supreme Court and that’s how it ended up being upheld by the two lower court rulings.

But as you said, justices Roberts and Kavanaugh, they were like, you know we’re just not going to hear this right now. We really appreciate it, but we feel like these two lower court rulings address the issue correctly and we don’t want to do it. And it was interesting because, who was the other one? That Thomas, Justice Thomas wrote, he was one that supported it. He did want to hear the case and he said that the court was essentially refusing to do its job by hearing the case because Planned Parenthood was involved.

Kavanaugh and Roberts didn’t get into a whole lot of discussion as to why they didn’t want to hear it, but some legal professors had been weighing in online and saying, well, you know, this is a high profile, controversial issue in life, certainly of Kavanaugh’s recent experiences, they may just desire to stay out of the limelight with such a high profile case. And going back to your point earlier, which addresses Planned Parenthood’s response to all of this is how this case came about to begin with.

So Louisiana and Kansas, both dissented and wanted to nix, you know, nix their contracts with these affiliates of Planned Parenthood after a video came out in 2014, I believe it was. Yes, these edited videos by a group called the Center of Medical Progress, who I guess according to Planned Parenthood deceived various folks by sneaking into meetings of higher ups of Planned Parenthood and getting video of discussions, talking about the price of fetal tissue, and so they, once these states saw these videos, they were like, well, we’re going to terminate our contracts, our Medicaid funding for these particular affiliates that are involved.

And that was their reason for doing it. That’s why these cases were even up before the Supreme Court at all. So Planned Parenthood was saying, hey they’re, without cause they want to, you know, eliminate our contracts and no longer allow us to provide services. And that’s where the lower court said, no, you know, state law clearly dictates or federal law clearly dictates that states can not nix these contracts without just cause.

And just because you don’t want to is just, isn’t just cause. It does make you wonder if it comes back again. Something similar. If they find another loophole that they want to use to get this issue back and forth to the Supreme Court, will they maintain this or is it just about timing?

Farron Cousins: Right. We’ll have to wait and see on that, but Mollye, thank you for talking with us today.