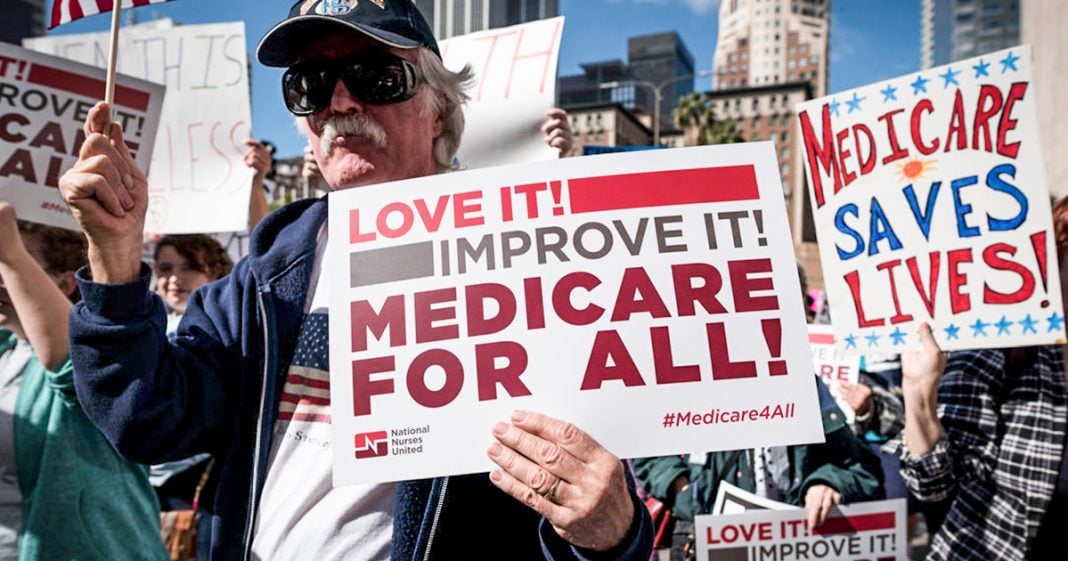 Americans are spending more and more money on healthcare each year, and that number just continues to climb. At this rate, we can’t afford to NOT have Medicare for All as a country, as it would actually save us money in the long run. Americans understand the issue, its just our politicians who don’t seem to understand this is the only way forward. Ring of Fire’s Farron Cousins discusses this.

According to new reports, the United States is spending three and a half trillion dollars annually on healthcare costs that comes to almost $11,000 per United States citizen, a $10,739 per person to be exact at this point with how much we’re spending each year on healthcare costs, on prescription drugs, on copays and deductibles and premiums. With all that we’re spending, we can no longer afford to not have a Medicare for All system here in the United States. A new report, and you can actually find a link to it in the description of this video says that if we were to enact Medicare for All and we put every United States citizen on this, Medicare for All plan wages for workers would actually increase by about nine percent. Expenses for corporations would decrease by eight percent, so corporations have to spend less money so that eight percent in savings suddenly becomes eight percent in profit.

That they could either spend giving their work as a raise, which they won’t, or more likely they could give it to their CEO, but how they can do that because everybody would have health insurance wages would increase by nine percent according to this study because we wouldn’t be paying those massive premiums for healthcare. We would still be paying premiums, but they would not be as high. We are at a point, a pivotal point in the United States in our history where we cannot afford to stay the way we are. We have to evolve, we have to adapt and we have to change and we have to do it pretty damn quick. Not just on the issue of healthcare but on issues like climate change as well, but on the issue of health healthcare, this is something we could fix in a heartbeat. We just refuse to do it and the problem is the public wants us to do it.

They want Medicare for All by an overwhelming majority left, right center. Everyone, majority of everyone wants this done. It’s our elected officials that aren’t doing it. Now we have some great incoming Democrats to the House of Representatives in January, people that are going to shake things up and they’re going to push for policies like this alongside existing people like Senator Bernie Sanders, a representative Ro Khanna, people who are already pushing for this. We will have more voices for it, but that still may not be enough. I haven’t seen anyone, not a single person on the republican side of the aisle in DC and elected official saying, we should go this route and if we don’t have that, then this can never become reality. They need to look at the numbers. Even the Republican funded studies show that Medicare for All would save us money, but now we’re talking about nickel and diming it.

Average workers get a raise. Corporations get a cut. They don’t have to pay as much money. I mean, good God. We’re looking at a system where literally everyone wins, except of course the insurance companies and they throw a lot of money around Washington DC, so to the drug companies and that’s the problem. As long as that money exists, as long as their lobbyists are out there talking to these members of Congress every day, we’re not going to see change and this is a change that would benefit every single person in this country. We would all have better healthcare and we would all save money corporations to. And yet we can’t have it because Republicans in DC and plenty of Democrats as well want to keep their options open and make sure that that money from the insurance industry, from big Pharma, from these hospital corporations, they want to make sure that that money keeps flowing in so we get screwed. But they get a few extra dollars for their reelection campaign.