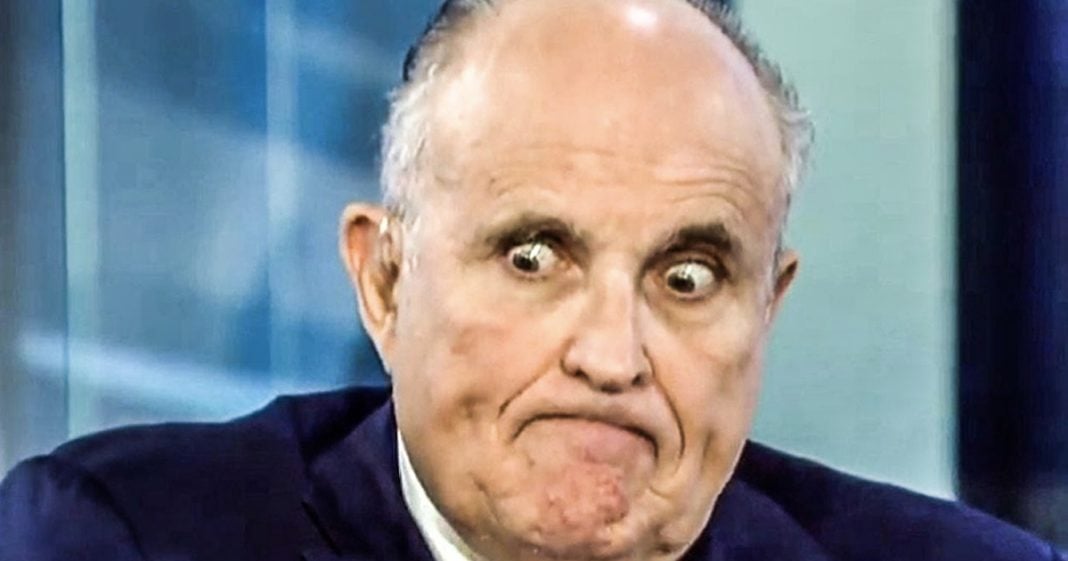 Donald Trump’s current lawyer, Rudy Giuliani, told The Daily Beast this week that Donald Trump’s campaign finance crimes really aren’t that big of a deal because “nobody got killed, and nobody got robbed.” Is Giuliani actually a lawyer? Does he understand that there are actually more than two crimes that people can commit in this country? Ring of Fire’s Farron Cousins explains why Giuliani’s rant can, and WILL, be used against his client in court.

Well, we knew it was only a matter of time before Republicans came out and said, the Donald Trump’s crimes really aren’t that big of a deal. People have been predicting this for months, and Rudy Giuliani, Donald Trump’s personal lawyer. No, not the one who just got three years in prison. The current lawyer for Donald Trump said this week to the daily beast that Donald Trump’s crimes are no big deal. In fact, this is his exact quote, a nobody got killed. Nobody got robbed. This was not a big crime. So according to this man that allegedly went to law school and allegedly has passed the bar, if you don’t kill somebody and you don’t rob somebody not, not a crime, is that. Is that really the argument you’re trying to make here, Rudy Giuliani, because if it is, there are thousands upon thousands upon thousands of inmates in the United States who would also like to use that defense to get released from prison.

Not to mention the fact that would also mean we need to go ahead and open up the doors and your little migrant detention facilities because those people haven’t killed anybody. They didn’t rob anybody in. Technically they only committed misdemeanors if they crossed the border illegally. Trump committed a felony and you’re trying to write that off. Hell, we need to rework the entire criminal justice system based on Rudy Giuliani’s reasoning here. So if you’re in prison right now and you didn’t kill somebody and you didn’t rob somebody in the eyes of Giuliani, you’re free to go. That’s what he’s telling us right now. Now here’s the thing again, everybody predicted this was going to happen, but it signifies what’s happening with Donald Trump’s defense right now. They can no longer argue that the man did not commit a crime. That’s important. That is the most important thing right now.

So instead they’re trying to downplay and say that that crime wasn’t that bad. It’s not like each chop somebody’s head off, right? I mean, come on. There is much worse crimes out there. Then campaign finance violations and multiple campaign finance violations and obstruction of justice and possible conspiracy to a subvert campaign. Finance laws, right? That’s not murder. No. Giuliani listened and listened. Well, okay. There’s more than two laws in the United States. There’s not just a law saying you can’t kill somebody in a law that says you can’t rob somebody. We have a very complex criminal justice system here in the United States and to an extent it is very much broken, but when it comes to the law that your client broke, it is black and white. He knew it, he broke it, he didn’t care, and it’s your job to defend him and if you want to walk into that courtroom one day and say that, come on, Jerry, he didn’t kill a man.

Let’s all get out of here. Yeah, that’s not gonna. Go over very well. Certainly not with the jury, not with the judge, and probably not even with your client. And also, quick reminder here, you don’t have to say anything because all of these little excerpts that you give to the media, all your tweets, all your interviews that can be used by prosecutors in a courtroom to signal that you knew your client committed a crime. So my best advice is that you just kind of need to shut your mouth if you want to be able to actually help your client. Now, personally, I don’t want you to be able to help your client and I don’t think you can help your client. I don’t think if you had kept your mouth shut this entire time, you’d be helping your client because you’re that bad app, the law, but for the love of God, you are really making things so much worse for this man. And I can’t imagine what is going to happen to you and your reputation when you personally send this defense down the drain.